After synod ‘listening’ phase, LA Catholics hope for start of something new

As she began preparing her parish’s participation in the local phase of the Synod on Synodality, Alisa De Los Santos of St. Mary Magdalen Church in Camarillo made a discovery. Before helping organize the culturally diverse parish’s multiple synodal “listening sessions,” she realized, she would first need to do a lot of listening herself.

“It is wonderful how we learn from each other, but it was humbling for me to remember that we have to ask people what’s best for their comfort level to express their faith journeys, what they struggle with, and what brings them joy, and to realize there is a need for separate spaces to have those conversations,” De Los Santos said of the process, which has taken up the last eight months.

Reflecting on a parish of about 4,000 families where Masses in English, Spanish, and Vietnamese are regularly celebrated and Tagalog is also spoken among its Filipino community, De Los Santos said she found it surprising how “some may be divided on issues, but they found they could sit at a table and not have necessarily a debate.

“They could hear opinions different from theirs, the tension could live there and not escalate, we would write it down and everything would be OK.”

That was when the Archdiocese of Los Angeles began connecting with its 280-plus parishes across five pastoral regions, as well as with other groups reflective of the diversity of the local church population. That included a synod of Latino women in leadership at Loyola Marymount University, as well as sessions for deacons and women religious in the archdiocese.

A June 5 afternoon Mass at the Cathedral of Our Lady of the Angels on Pentecost marked the official close of the synod’s diocesan phase. It also offered a chance to reflect on what has germinated.

Vice Chancellor Father Parker Sandoval, who also serves on the local synod’s “steering committee,” said one of every two parishes hosted listening sessions, bringing together more than 18,000 participants. Now, his team is on target to complete the next phase: drafting a final “synthesis” of input from all five regions to be submitted to the U.S. Conference of Catholic Bishops by the end of June. That will be included in a national report that is then sent to the continental phase of the synod before it goes to Rome in 2023.

The task of synthesizing at the regional level has fallen to people like Deacon Chris Amantea, regional assistant for the San Fernando Pastoral Region. He, Auxiliary Bishop Alex Aclan and a few others recently finished drafting their regional synthesis report from comments from the various parish listening sessions.

Deacon Amantea called it a “very humbling and enlightening process to actually read and ‘hear’ the voices” of his region’s synod participants.

He said the comments were synthesized in a way that “was truly representative and reflective of the reality of what was listened to, not only positive experiences, but also challenging and negative experiences.”

The archdiocese’s report will be published on its synod website by the end of summer, and regional reports like San Fernando’s probably sooner. Parishes are also encouraged to share their own reports with their parishioners.

Archdiocesan steering committee coordinator Karen Luna said some parishes reported enjoying the process so much that they want to meet regularly to continue the discussions.

“We believe starting each session with prayer and a Gospel reflection gave the people a sense of safety and kinship that helped the dialogue,” said Luna, who also coordinates the Young Adult Ministry for the archdiocese’s Office of Religious Education. “Another grace was that ability to celebrate the community in the midst of the pandemic, and finding spaces facilitated by technology were important especially with young adults.”

Father Justin Claravall, SJ, associate pastor at Dolores Mission in downtown Los Angeles, said many of his parishioners also participated in a listening campaign for L.A. Voice, a local faith-based community organizing network. He said that participants had to remind themselves that this synod was less about outcomes and more about the power of listening.

“The synod was valuable because it strengthened our relationships with each other, the Body of Christ got to exercise its connective tissue to buff up its members.”

At Our Lady of Peace Church in North Hills, synod organizer Lorena Soriano said that parishioners’ “enthusiasm and honesty” made up for lower than hoped for participation.

“I think the groups feel heard and they trust this process will be valuable as long as the parish continues on the synodal path,” said Soriano. “The consensus was — and each group expressed this — that we should continue to talk and that we start to make some changes.” 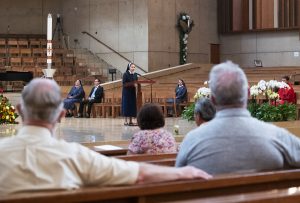 At the June 5 Synod Closing Mass, Archbishop José H. Gomez called the local synod phase “a beautiful time for reflecting more deeply about our lives as disciples and our responsibility for the Church’s mission. I think that’s exactly what the Holy Father intended.”

Sister Darlene Wen, a member of the Lovers of the Holy Cross of Los Angeles community who works as a critical care nurse, spoke at the end of the Mass about what she learned helping to facilitate a Zoom listening session for the archdiocese’s women religious, saying it affirmed three things for her.

“One, are there different opinions in the Church and do they sometimes appear to be polar opposites? Yes.

“Two, can we get so caught up in our opinions that we sometimes forget the person that exists behind the issues? Yes.

“Three, but all of these differences, don’t they come from hearts that, at the end of the day, are genuinely seeking Christ and seeking to bring him to others? Yes.”