“I ran over and picked him up,” said McGowan, recounting the moment this summer at the Westfield Santa Anita mall in Arcadia.

McGowan kind of chuckles as he tells the story. Ramirez, sitting next to him in the library of St. Elizabeth of Hungary School in Altadena, surrounded by books, laughter, and a smattering of Christmas decorations, smiles broadly remembering that moment of uninhibited joy, though mindful that it wasn’t the first time his friends had lifted him.

It was back in February (on Valentine’s Day, of all days) that Ramirez, then a fifth-grader, was caught in the crossfire of gunshots outside his home, and was hit multiple times.

He says it’s common for people to ask him what it felt like to be shot. “It burns,” he tells them. “Then your whole body goes numb. After I got hit the first time, my ears began to ring, then I couldn’t hear the other ones. And then I was on the ground.” 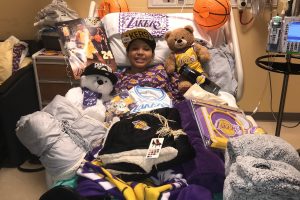 The Los Angeles Lakers surprised Ramirez, a diehard fan, with special gifts for his birthday in March, which was spent in the hospital. (GoFundMe)

His friends’ concern was what they could do. Being from St. Elizabeth, their first thoughts turned to prayer. For McGowan, who had been playing video games online with Ramirez not long before he was shot, prayer was really the only thing that seemed to make sense.

“I prayed when I found out [Ramirez had been shot] because I didn’t know what was happening,” McGowan said. “It was crazy. Fifteen minutes before it happened, I was passing by his house. If I had stopped by to see him and we had both been on the porch, it could have been me and him who got shot.”

It was important for Johanna Jimenez to pray because she says she prays for all of the important people in her life. Jimenez, who lives just four blocks from Ramirez, had heard the gunshots, but thought they were fireworks being set off.

When she learned what she had heard, she prayed because “it was important, we’ve been friends since kindergarten. I wanted for him to be OK and to be better.”

Andre Ball said his family regularly prayed for Ramirez because what happened to him “was shocking, scary. It could have been me.”

It was months after the shooting before Ramirez saw his best friend, Dallas McGowan, again. “I ran over and picked him up,” recalled McGowan of their reunion. (Victor Alemán)

Laura Navarette, whose daughter Yael Correa has been friends with Ramirez nearly their whole lives, said St. Elizabeth “is a parish that prays,” and Correa soon found herself praying four times a day, sometimes at the small altar the family constructed in its living room, praying because when she found out Ramirez had been shot, “I was really scared. I just couldn’t wrap my mind around it.”

Ramirez remained in the hospital for such a long time that he’s not even sure how long he was there, though he does know it was long enough to celebrate his 11th birthday in March.

“I used to cry a lot because I wanted to see my family. It felt like a long time.”

It was while on FaceTime that he first reconnected with his friends.

“They told me they were praying for me,” he said. “I was going into surgery; surgery is kind of scary, so I was thankful.“

Of course, this being the Christmas season and the end of the year, Ramirez and his friends can’t help but think about what they’ve been through, how grateful they are that they made it through and still find themselves together. 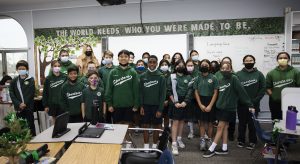 The friends are now sixth-graders. Their new teacher, Stephanie Hickey, knew that this was “a pretty special group.

“I was excited to get a group of friends, especially a group that had stepped up in this way. It was a bit of a gift to me to have that in the classroom.”

Hickey said she knew about Ramirez’s friends supporting him through prayer. It didn’t surprise her.

“We try to instill that in the kids,” she said. “The class turns to prayer because it’s what they’re used to doing.”

She said she reminds her students that what they’ve endured over the last two years — a pandemic and the shooting of one of their classmates — is nothing close to what she ever had to deal with growing up.

While it’s admirable this group has gotten through trying times they didn’t sign up for, the fact is they’re children. And so it gives Hickey a good deal of joy to see them as she did the previous day, together in what is called the “car line” helping students out of cars, acting “a little bit dopey.”

“You know, there was some dancing, some testing of vertical jumps. This group needs to be goofy. All the things they are going through, there is a lot of stress. You’ve got to let loose at times.” 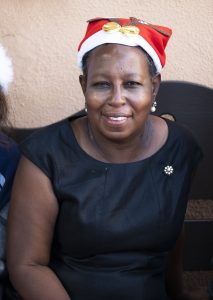 As principal of St. Elizabeth, Phyllis Cremer said “goofy” is part of the goal for her students.

“We find ways of letting them still be kids,” she said. “That’s really what our mantra is, we want them to be goofy. And I think that’s one thing, we’ve created an environment where kids can just be kids, we don’t need them to grow up faster than they need to.”

But many times the world does not cooperate. In July, two men in their early 20s were charged with attempted murder for the shooting and, sadly, Ramirez’s shooting is not the only incident of gun violence in the area. McGowan can tell you about times he’s had a team practice canceled at a local park because of gunshots. It was just recently that another young boy, just 13, playing video games in his own bedroom, was hit by a stray bullet and died.

Ramirez and his parents visited the family of the boy, bringing them food from their restaurant.

“I prayed for that boy. We went to his house to donate,” Ramirez said. “[The family] knew about me. We met the family, we talked. They said they were thankful for me being alive. We told them we were sad for their son being killed.”

Though he’s happy to be back at school, back with his friends and back to preparing for a Christmas that will bring people together, in person, Ramirez admits he has struggled with some things, especially going outside. 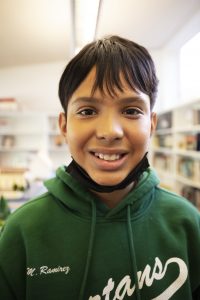 “I don’t really like going outside because that’s where [the shooting] happened. I’ve prayed to have the strength to go outside.”

Just a few minutes later, he is standing and laughing with McGowan, their arms around each other’s neck. A couple of goofs, the very best kind, laughing, outside.