Msgr. Lawrence Edward Donnelly always knew he wanted to be a priest. As soon as he graduated from eighth grade, he entered the junior seminary in Los Angeles. He hitchhiked to and from the school, never missing a single day.

Friends and family fondly remember “Father Larry’s” dedication to his vocation, and how it guided him through the 71 years he spent as a priest in the Archdiocese of Los Angeles, until his death on September 23, 2020, at the age of 96.

Born in Michigan on October 21, 1923, Larry, as his family called him, was one of seven children. During the Depression, his family moved to California, hoping for better opportunities. There, Larry recognized God’s call to be a priest, and was ordained on May 7, 1949. His first baptism was that of his own niece.

As a priest in the Archdiocese, Fr. Larry served as a coach and teacher, putting the athletic department at St. Agnes School in Los Angeles on the map. Around 1955, Fr. Larry was sent to Rome to study at the Vatican. When he returned to Los Angeles, he served as secretary to Cardinal McIntyre, and then to Bishop (later Cardinal) Manning for over 10 years, developing a close friendship. 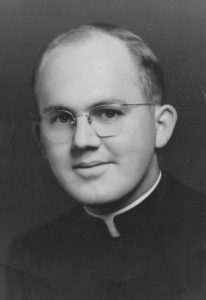 In a tough conflict of interest for a Notre Dame fan, Fr. Larry was chaplain at USC for four years. He loved the position, but carefully downplayed his love of ND football on rival game days.

In 1967, Fr. Larry was placed as pastor of St. Michael Church in Los Angeles, where he remained for over 25 years. The church faced many struggles during that time, from robberies to neighborhood riots. Fr. Larry, then elevated to Monsignor, was dedicated to keeping the newly refurbished church and school safe, despite suffering physical attacks.

When Msgr. Larry retired in the 1990s, he continued to serve as at St. Timothy Church in West Los Angeles. Many parishioners followed their beloved pastor and friend to St. Timothy’s.

Msgr. Larry was a humble, loving man. He treasured his family, especially his mother, and his young nieces and nephews. An avid sports fan, he always rooted for the Dodgers and Notre Dame.

Msgr. Larry’s vocation was marked by his devotion to the Blessed Mother and the Church, to whom he devoted his whole life. He was rarely seen without a rosary in hand, and in his later years, wore a rosary ring constantly, saying the prayer many times throughout the day.

One of his personal mottos was “sicut parvuli,” meaning “as little children.” Msgr. Larry deeply believed that we must become like little children to enter the kingdom of Heaven, as Jesus taught, and worked to bring his family, friends, and parishioners as children to God.