‘A huge step back to normalcy’: Eight transitional deacons ordained for LA

Eight men preparing for the priesthood were ordained transitional deacons Saturday, May 29, in the first ordination Mass celebrated inside the Cathedral of Our Lady of the Angels in nearly two years.

Turning to them during his homily, Bishop O’Connell acknowledged the unexpected twists that the COVID-19 pandemic had wrought on the vocation journeys of the men, all of whom are being formed for the priesthood at St. John’s Seminary in Camarillo.

“You might be reasonably nervous, getting ordained these days,” he said with a wry smile. “The world is getting to be a tough place for our faith in our Church. When I was ordained, we used to say how we should follow the faith of our fathers. And now when those are ordained, they are saying, ‘Be not afraid’.” 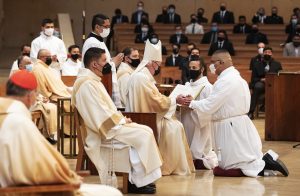 Guillermo Alonso makes his first vows as a deacon during the rite of ordination May 30, 2021. (Victor Alemán)

One of the newly ordained deacons, Juan Gutierrez, remarked later that the bishop’s words reminded him of a favorite quote from Padre Pio.

Concelebrating the liturgy with Bishop O’Connell were some 50 priests and Archbishop Emeritus Cardinal Roger Mahony. While the ceremony took place under looser restrictions than last year’s deacon and priest ordinations — which were held outdoors in the Cathedral Plaza — capacity limits remained in effect and face coverings were mandatory.

The traditional post-ordination first blessings in the plaza were replaced by planned gatherings set up in advance at local parishes for each new deacon to receive guests and congratulations.

In welcoming those present at the Mass, Bishop O’Connell thanked the families of the eight “for their fruit of your faith and your support.” He also noted it was the first ordination under the new Marian tapestry celebrating the solemnity of Mary, Mother of God, unveiled on Jan. 1.

These eight deacons will continue their final year of studies at St. John’s Seminary in the fall after serving at their home parishes this summer.

Father Mike Perucho, the new director of the archdiocese’s Office of Vocations, called being back in the cathedral for the ordinations “a huge step back to normalcy after everything we experienced this past year. 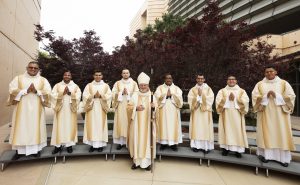 The eight new transitional deacons with Bishop David O'Connell after the Ordination Mass May 30, 2021. (Victor Alemán)

“There was great joy in having the transitional diaconate there, even with protocols still in place,” said Father Perucho.

The priest noted that the diaconate ordinations gave planners an opportunity to prepare for the priest ordinations a week later on Saturday, June 5, and “measure how things can be improved.”

Outgoing Vocations Director Father Sam Ward said the ceremony was bittersweet for him as he prepares to take over as pastor of St. Raymond in Downey on July 1 after eight years in the Office of Vocations.

“I’ve been with this group my whole time in the vocation office, from discernment and formation, so this has been a much deeper experience for me,” said Father Ward. “It’s been an honor and a privilege to walk this journey with them.”

Bishop O'Connell, Cathedral of Our Lady of the Angels, Vocations