There were no local dignitaries, regional bishops, or long speeches on this September morning — just a nun with a big pair of scissors, and nearly 300 Our Lady of Talpa School students gathered around the door to their newly remodeled gym, many of them jumping up and down excitedly on the newly installed schoolyard pavement.

It was the moment these Talpa Trojans had been waiting for after a busy summer. Thanks to a $1.7 million grant from the Dorothy Shea Foundation — and a lot of parent volunteer hours — the Boyle Heights K-8 parochial school has gotten a much-needed facelift.

“Our school has been the same for too many years. Nothing had changed. It was always getting hot, and we didn’t have any air-conditioning vents, which now they added,” explained eighth-grader Delilah Anguiano.

The upgrades include a state-of-the-art STEM laboratory, freshly painted classrooms and hallways, new projectors, and a playground for its youngest students among this year’s upgrades.

And, of course, that gym.

“Our biggest need was to convert an auditorium that was not well-used and had been neglected for a long time into a functional gymnasium,” explained principal John Rojas.

The remodeled space hosted the Tuesday morning blessing ceremony, which began with students singing “Talpa’s the school that the Lord has blessed” (a version of the popular hymn “This is the Day” rewritten for the occasion).

Children, parents, and guests watched a video presentation of the project before Father Perry Henry, CM, led them in prayer and blessed the gym with holy water.

For Rojas, the gym’s state-of-the-art makeover is meant to make it the “pearl of our parish community.” Sixth-grader Arturo Medina had a different perspective.

“I know they’re going to put a basketball court in, and I really love basketball,” answered Medina when asked what he was most excited about. 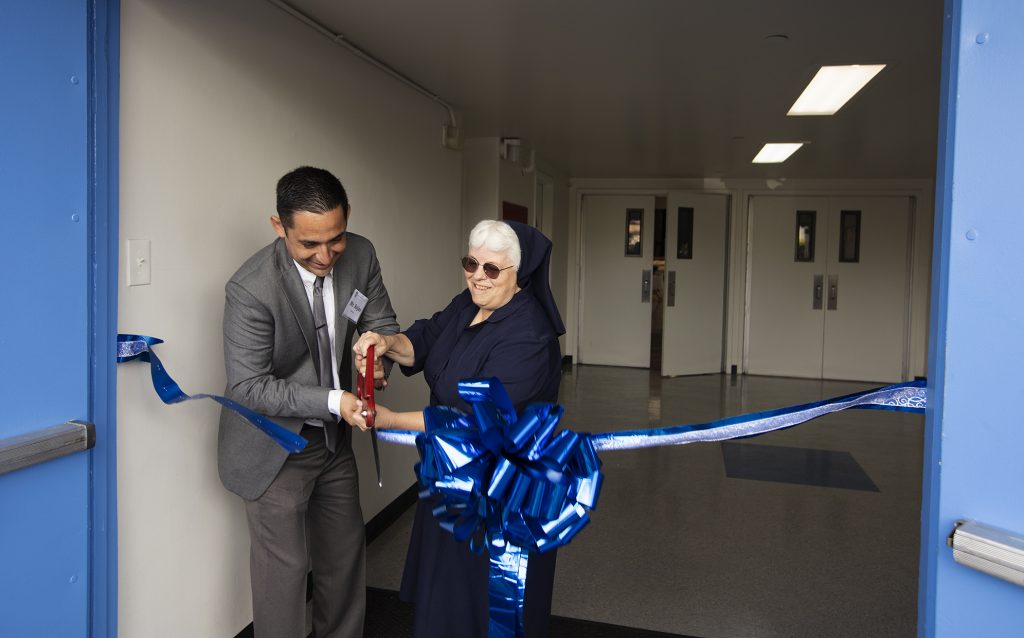 Our Lady of Talpa principal John Rojas and his predecessor, Sister Adella Armentrout, at the Sept. 10 ribbon-cutting. VICTOR ALEMÁN

The parish of Our Lady of Talpa was founded in the 1920s by families from the Mexican town of Talpa de Allende in Jalisco, driven into exile by religious persecution during the Mexican Revolution.

In 1951, the parish opened the school, and since then sisters of the Daughters of Charity order like former principal Sister Adella Armentrout (the nun with the scissors) have helped staff the school, educating students from low-income immigrant families in the Boyle Heights area. (Today, there are fewer sisters, but the school is still “co-sponsored” by the order.)

According to Rojas, more than 90 percent of enrolled students currently receive help with tuition aid.

That’s in part thanks to a firm mandate from the Daughters of Charity Foundation, which helps fund the school, to turn no family away, and to “trust in God that somehow, some way, we’ll make it work financially” for them, said Rojas.

“The fact we can tell families, ‘You may not be able to pay full tuition, but this is your home,’ that’s why I think this place is a real beacon of hope for many people,” said the principal.

As gentrification in the neighborhood pushes home prices higher and families into cheaper areas like the Inland Empire, schools like Talpa are under pressure not only to balance budgets, but to equip graduates for competition in a changing job market.

That’s why the school’s new STEM lab (short for science, technology, engineering and mathematics) is about more than letting students enjoy tinkering with Lego robots.

“When you give a STEM lab to a school, it helps bridge not only the achievement gap, it also bridges the opportunity gap” for low-income family students, said Leslie De Leonardis, director of the Archdiocese of Los Angeles’ STEM network. 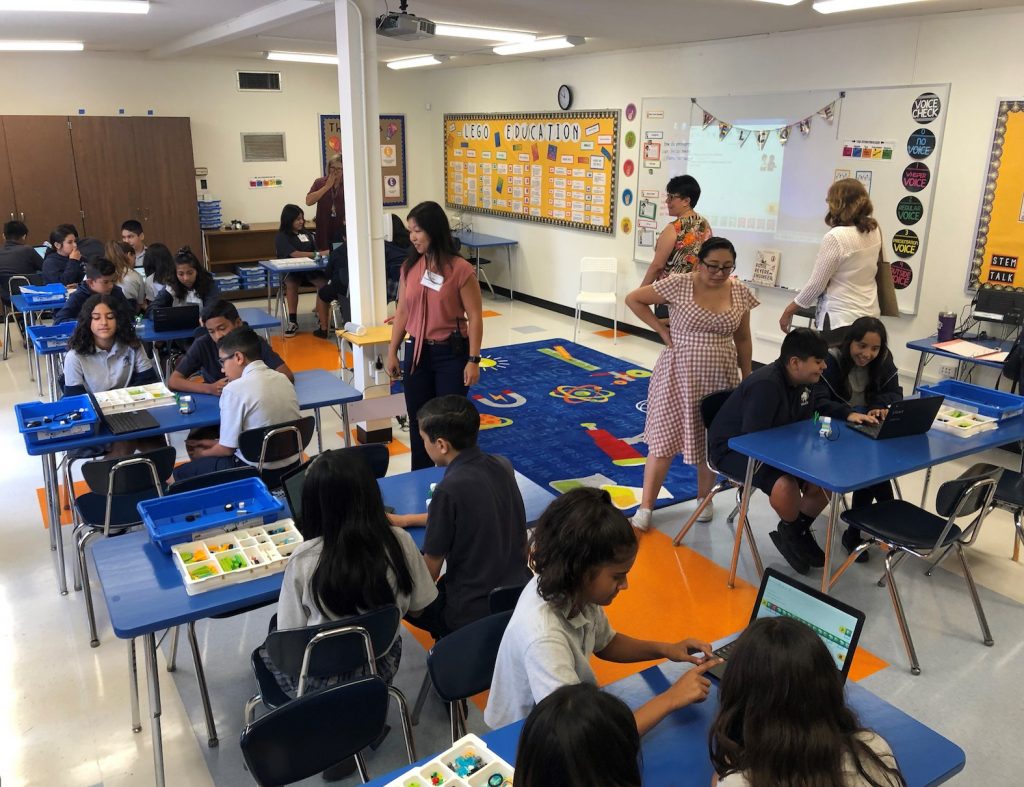 “It provides students with the opportunity to not just learn skills like how to use a 3D printer or code and program robots, but how to apply those skills in the real world,” added De Leonardis.

While construction on the campus buzzed away this summer, parents stayed busy, too, using their spare time to paint walls, move equipment, and wax floors before the school year started. In May, they helped organize a walkathon fundraiser together with the school’s Vincentian Marian youth group that brought in more than $30,000 in donations for the project.

“These children come from poor families, but when it’s time to give and serve, it’s like the parable of the widow giving all she has,” said Belinda Pantaleon, vice principal.

Pantaleon, who has worked at Talpa for 31 years, credits the school’s faith foundation and the dedication of parents to making “what seemed to be impossible become possible.”

“What you see here is from parents giving everything they have. This is the richness of Talpa.”