After more than a year of supporting healthcare workers doing whatever it takes to save lives, the timing of a new bill currently being considered by the California Assembly is chilling.

State Bill 380 (SB380) seeks to amend the End-of-Life Option Act of 2015. That law legalized the prescription of life-ending drugs by physicians in California for patients who were deemed to have six months or less to live. The act’s passage relied heavily on “safeguards” built into the law, such as a 15-day minimum waiting period between two requests for lethal drugs, and a final attestation, or formal request for life-ending drugs, before ingestion.

SB380 seeks to remove these safeguards, requiring a mere 48 hours between requests and eliminating the final attestation. As things stand, the End-of-Life Option Act is set to undergo legislative review in 2026. SB380 extends the date of this review to 2031, stalling transparent, rigorous examination of data surrounding the implementation of physician-assisted suicide in California — data that even state health officials have testified is usually incomplete and unverifiable.

This is because the data gathered is minimal and reporting is entirely voluntary on the part of the prescribing physician. The available data collected does not actually ask or answer the questions necessary to understand how the law is used or abused. Thus, the reform that’s actually needed would involve improving the data-gathering mechanisms to allow for adequate review of the law’s effects and implementation.

Regardless of where one stands on the morality or legality of physician assisted suicide, the rashness of the proposed amendments should be obvious. The safeguards in place are meant to make assisted suicide a last resort and to protect against coercion or impulsive, ill-considered decisions. We know that suicide tends to be an impulsive act, and the person who takes his or her own life is often ambivalent and emotionally conflicted. Providing a minimum of 15 days between requests allows patients the opportunity for reflection, evaluation, and reconsideration.

But what proponents of assisted suicide touted as safeguards in 2015 are now being recast as “barriers” and “obstacles to access” by these same proponents.

During the first committee oversight hearing to extend the law, proponents actually announced the “need” to advertise assisted suicide to more minorities, reminding them of the law’s existence and lamenting the fact that minorities were not frequently availing themselves of assisted suicide.

Sadly, Medi-Cal still does not have sufficient palliative-care funding to ensure that recipients receive adequate end-of-life care (outpatient palliative care is available only for those with Stage 4 cancer, but not for other life-limiting conditions). The effect is to subtly encourage individuals with limited access to good end-of-life care to take their lives — which will always be the cheaper and more expedient “option.” 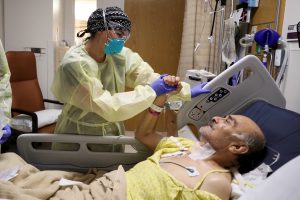 While the public’s attention remains fixated on COVID-19, lawmakers are trying to quietly push through this irresponsible piece of legislation. After a pandemic that has exacerbated mental health crises and physician burnout, while also exposing inadequate senior care and gross disparities in healthcare access, why would we now — indeed, ever — be looking to make suicide easier? To do so would be to abandon the communities we care about at their most vulnerable moments, and to make the very doctors we hail as heroes for saving lives complicit in the taking of lives.

The hypocrisy is palpable.

Arguments in favor of SB380 are advanced in the name of compassion, dignity, justice, end-of-life care, freedom, and consent—all good things. Yet making it easier for doctors to facilitate suicide is not a means to those laudable ends. At best, the authors of this bill distort our good aspirations to care for suffering individuals. At worst, they actively subvert this goal in the name of compassion and dignity.

Contrary to the law’s proponents, true respect for human dignity means helping people see themselves as worthy of life rather than candidates for death. Real justice requires providing all Californians the same access to quality end-of-life care, not promoting suicide as the cheapest and easiest option. Authentic freedom, choice, and consent require for more accountability, more safeguards, and more options for care, not fewer. And true compassion means steadfast care for the dying and suffering, not the promotion and hastening of death.

Aaron Kheriaty, MD, is professor of psychiatry and Director of the Medical Ethics Program at UCI School of Medicine.

Caitlyn Axe is a senior studying biochemistry and ethics at the University of Washington.