“Whoever saves one life saves the world” reads the Talmudic inscription on the ring offered by Jewish survivors to Oskar Schindler, the protagonist of Steven Spielberg’s 1993 Oscar-winning film. The Yad Vashem, Israel’s Holocaust memorial, honors as “Righteous Among the Nations” those who saved Jewish lives during the Holocaust.

The work of historians has revealed many more such “righteous” over the years. Among them are two little-known Catholic doctors in Rome. Their story, told in the riveting new 50-minute indie documentary, “Syndrome K,” narrated by acting legend Ray Liotta before his death earlier this year, involves an ancient Catholic hospital and the perhaps only mortal disease known to have saved lives.

The fascist regime in Italy, led by Benito Mussolini, was allied with Hitler’s Nazi Germany. In 1938, Mussolini proclaimed the so-called “Racial Laws”: While they were not deported as in other parts of Europe, Jews in Italy were stripped of their rights, lost their jobs, and saw their freedom severely limited in many ways.

Things changed dramatically a few years into World War II when the king of Italy, Vittorio Emanuele III, ousted Mussolini in 1943 and negotiated a unilateral surrender with the Allied forces. The battle to control the country resulted in the peninsula being split in two: the south went to the Allies, while the north and center were occupied by the Nazis. That included Rome, and the Vatican was hostage to the German army led by Gen. Albert Kesselring.

But besides being home to the Vatican, Rome was also the seat of one of the oldest and most populous Jewish communities in Italy, mostly concentrated in the area known as the “Ghetto,” on the southern bank of the river Tiber, right across from the Tiberina Island.

On this tiny island stood (and still stands) Fatebenefratelli Hospital, founded by disciples of St. John of God in the 16th century and administered by friars. At that time, the hospital was run by Catholic doctor Giovanni Borromeo. One of his collaborators was Adriano Ossicini, an antifascist Catholic doctor. Borromeo hired Vittorio Sacerdoti, a young Jewish doctor who had lost his job thanks to the “racial laws.”

In September 1943, the Nazis promised the city’s Jewish community their safety in return for more than 50 kilograms of gold. The people handed over the requested payment only to see the Ghetto raided by the Nazis, much to the horror and astonishment of the whole population of Rome.

Pope Pius XII summoned the German ambassador and pleaded with him for the Jewish community –– to no avail –– but he did not issue a formal condemnation of the raid, a decision that is still a source of criticism and controversy.

Yet the Vatican covertly encouraged religious orders, churches, and families to hide as many Jews as possible. Approximately 4,500 Jews found refuge in religious institutes, monasteries, and convents.

The Fatebenefratelli Hospital was just a few yards away from the Ghetto. In the chaos of Oct. 16, several members of the Jewish community crossed the bridge and sought refuge in the hospital.

When Borromeo asked about his ailments, one man jokingly replied that he was suffering from “Kesselring’s syndrome,” referencing the German general.

This gave Borromeo and his two collaborators, Sacerdoti and Ossicini, an idea. They began admitting Jewish patients, claiming they were affected by Syndrome K, a mysterious disease. K stood for Kesselring, but was also an allusion to Kappler, the German colonel who oversaw the rounding up of Roman Jews. 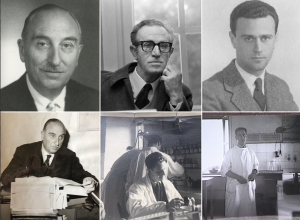 The three doctors created fake admission papers, forged charts and documents recording the symptoms and progression of this disease, and even established a dedicated ward in the hospital, a completely isolated unit kept with the highest anti-infection protocols.

The Nazi were terrified and investigated the matter from afar. Syndrome K was highly infectious, neurologically degenerative, and fatal, they were told. And since the Jews were destined to die anyway, they reasoned, it was not worth taking any chances.

Borromeo was friends with Giovanni Battista Montini, the future St. Pope Paul VI, who provided him with false documents that allowed him to move freely. With the help of the Vatican, Borromeo and his collaborators discharged their patients, provided them with fake identities, and proceeded to relocate them into convents and monasteries for protection.

The ruse of Syndrome K continued to hold until June 4, 1944, when the Allied forces entered Rome. Borromeo and his colleagues had saved more than 100 lives by then.

“Some people are predisposed to do good,” said one Jewish survivor in the documentary, echoing the words of St. Paul in the letter to the Ephesians: “We have been created in Jesus Christ to do good works, which God prepared in advance for us to do.”

Borromeo died in 1961. In 2004, the Yad Vashem recognized him as “Righteous Among the Nations.” Sacerdoti survived the Holocaust by working undercover as a Catholic doctor. After the end of the war, he continued to serve the Jewish community in the Ghetto.

Ossicini died in 2019. In the documentary he is interviewed a few months before his death, and the last words that he pronounces in front of the cameras are “Courage always wins.”

Borromeo and his collaborators felt that God had placed them in that moment to save those families. “I had to save those lives,” Borromeo said in the documentary, “it was my duty.”

“Syndrome K” tells the little-known story of men who answered God’s call in the dramatic circumstances of the times. But it also is a call to reflect on the good works God is preparing for us for the perilous times that may lie ahead.