Complying with restrictive San Francisco orders limiting worship services to 12 people and only outdoors, San Francisco Archbishop Salvatore J. Cordileone and four other priests brought the Mass to the people on the feast of the Assumption by celebrating multiple Masses on the cathedral plaza.

The Masses on the cathedral's patronal feast begin a new schedule of multiple outdoor Sunday Masses at the Cathedral of St. Mary of the Assumption, an unprecedented development and perhaps the first time Masses have been celebrated on the plaza during the cathedral's 50-year history.

"Worship is a First Amendment right," Archbishop Cordileone said in a video recorded Aug. 15, moments before celebrating 9 a.m. Mass in front of the cathedral's closed doors.

"Whenever a society or nation turns its back on God ... it always begins to corrupt and fall apart. We need to reclaim God at the center of our society," he said. "We see that in the way the health orders in certain parts of the state, including here in San Francisco, are being unequally applied."

"Religious activities are being more greatly restricted than other types of activities," such as shopping in retail and grocery stores, he said.

The archbishop and four other priests simultaneously but separately offered Mass in small groups outdoors, with the archbishop at the top of the steps of the cathedral and the priests offering Mass at temporary altars along the sides of the plaza. 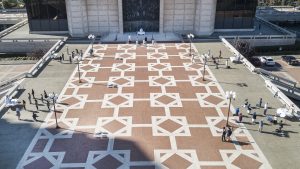 The weekend of Aug. 22-23, Archbishop Cordileone planned to celebrate the feast of Mary, Queen of the World, at 9 a.m. that Saturday and from that point forward at 9 a.m. on Sundays on the cathedral plaza until further notice or restrictions on Mass are lifted.

Those attending were required to wear masks and to sign contact tracing forms. The number of people at each Mass was monitored by cathedral and chancery staff, with X's made with blue painter's tape marking 11 spots before each of the temporary altars.

"As Catholics, we must first of all ask God for the grace to bear this patiently and with integrity. It would not be right to lash out," the archbishop said, noting it is important to obey the health orders for protection against the coronavirus. He said people also need to lobby government officials for equal treatment of religion.

The archbishop, in a July 30 letter, had urged all priests to celebrate multiple outdoor Masses and to respect all health directives from the state and the counties, as well as to follow the archdiocese's own protocols for safe celebration of the Mass.

The state of California requires houses of worship in counties on its watch list for increased cases of coronavirus to hold outdoor services but does not specify numbers of attendees. All three counties of the Archdiocese of San Francisco are on the state of California's watch list. San Francisco is the only county to impose the 12-person restriction.

"Praise God! This is what I have been waiting for," said Vivian Dudro, who attended the first Mass with her husband, with both wearing masks and carrying lawn chairs.

Another man, walking his dog along the street in front of the cathedral on Sunday, Aug. 16, the second day for the 9 a.m. Mass, said he would return for 11 a.m. Mass. "I haven't been to Mass in four months," he said, patting his golden retriever.

Beginning the weekend of Aug. 15-16, the Cathedral of St. Mary of the Assumption also resumed its full regular weekend Mass schedule but outdoors.

As of mid-August, California had recorded 622,000 cases of COVID-19 since the outbreak in March and nearly 12,000 people had died of the coronavirus statewide, according to the state department of public health.

Saying Mass on the plaza was an idea that came to the archbishop the week before and was quickly implemented with an announcement disseminated in a special edition of the archdiocesan communications email "The Bridge" Aug. 14, the eve of the feast of the Assumption.

"The idea came to my mind because we have a number of priests at the cathedral and other priests available at the chancery. We have a very large plaza. There is plenty of room to have multiple Masses at the same time," Archbishop Cordileone said. "They can worship together in small groups. This is a way we can publicly manifest our faith in greater numbers."