In his nearly nine years as auxiliary bishop in Chicago, people warned Bishop Alberto Rojas that something like this might happen.

“Somebody told me before, ‘You’re not very old, and you’re probably going to get a diocese of your own, so that I knew, but I wasn’t sure when or where,” he recalled in a recent interview.

In December 2019, Bishop Rojas found out “where.” Pope Francis tapped him to succeed Bishop Gerald Barnes as shepherd of San Bernardino, the nation’s sixth largest diocese.

On Feb. 24, more than 2,500 people packed inside St. Paul the Apostle Church in Chino Hills to welcome Bishop Rojas to his new home. Two cardinals and more than two dozen bishops were there for his welcome Mass, including Los Angeles Archbishop José H. Gomez and Archbishop Christophe Pierre, the pope’s apostolic nuncio to the United States. 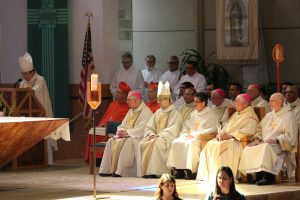 But while Bishop Rojas joked with the crowd about whether to call his transfer a move from the Midwest to the “very west” or the “wild west,” he is no stranger to Southern California.

Bishop Rojas was born in 1965, in Aguascalientes, Mexico, the sixth of eight children. He entered minor seminary in Mexico at 13, but eventually asked for time away to experience working life, according to the Chicago Catholic, the official newspaper of the Archdiocese of Chicago.

After immigrating to the U.S. from Mexico a few years later, he spent a short time in the LA area working before moving to Chicago and entering seminary.

In the 30 years since, the 55-year-old has called the Windy City home, first as a seminarian, then as a priest, ordained in 1997, and most recently as an auxiliary bishop, a post he was appointed to in 2011 by Pope Benedict XVI.

For Bishop Rojas’ niece, Norma Gallo of Ontario, the surprise news that her uncle was going to become her bishop was bittersweet.

“I felt so much joy, but also sad for him, thinking of all the time he’s been in Chicago,” she said. “It’s going to be a big change for him. But it’s a blessing from God to have him here so close.” 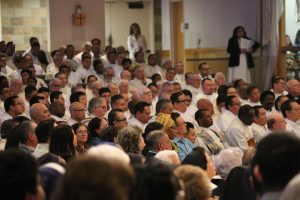 Hundreds of priests from San Bernardino County as well as Chicago were among the more than 2,500 in attendance for Bishop Rojas' Mass of Welcome at St. Paul the Apostle Church in Chino Hills. (Pablo Kay)

As a parish priest, Bishop Rojas had a reputation for being available and accessible, accepting dinner invitations from parishioners and ready to receive anyone, any time, in his home in the parish rectory. During his time on the staff at Mundelein Seminary, he was known to frequently help cover Masses in parishes around the archdiocese.

As auxiliary bishop, he helped minister to Chicago’s large, heavily Mexican Latino Catholic population. He was the only Latino bishop in the U.S. Church’s Region VII (Wisconsin, Illinois, and Indiana), making him the natural choice to serve as the region’s lead bishop representative during the V National Encuentro of Hispanic/Latino Ministry process, which culminated in 2018.

“He understands the everyday struggles of people, but he also is of the mind of Pope Francis, where he sees it’s important for people to encounter Christ,” Chicago’s Archbishop Cardinal Blase Cupich said in an interview at the Mass of Welcome. 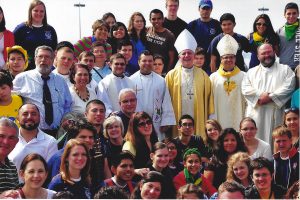 Cardinal Cupich said he relied on Bishop Rojas from the day he arrived in the Windy City in 2014. Bishop Rojas provided translation help and welcomed and introduced him to the archdiocese’s Latino community.

Cardinal Cupich has been Bishop  Rojas’ boss over the last five years and, as a member of the Vatican’s Congregation of Bishops, he was also involved in identifying candidates for Pope Francis to select from in sending a new bishop to San Bernardino.

“We had a wonderful opportunity as a congregation to look at all of the candidates that were eligible for this see, and he obviously won the attention of everybody, including the Holy Father,” Cardinal Cupich said. 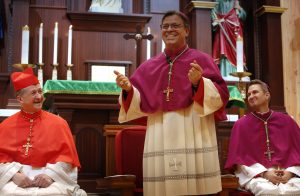 Cardinal Blase Cupich (left) joined other Chicago Auxiliary Bishops and Clergy from the Archdiocese of Chicago at an farewell evening vespers service for Bishop Alberto Rojas at the Shrine of Our Lady of Guadalupe in Des Plaines on Jan. 19, 2019. (Karen Callaway/Chicago Catholic)

In his welcoming Mass homily, Bishop Rojas laid out his vision for the Church’s mission in contemporary society. He recalled the answer Pope Francis gave him recently when he asked the Holy Father what he feared the most.

“Division comes from the devil, and unity comes from God,” Bishop Rojas quoted the pope as telling him and his brother bishops from Region VII in their “ad limina” visit in December.

“From the watering down of marriage, to the young adults going away, to the scandals in the Church, and so on, these are sources of division, sources of evil that seem to be taking the world over,” Bishop Rojas told the faithful.

In the face of divisions, he said, the Church needs “wisdom from above,” which comes from “the knowledge that we need to live in this life and to interact with our circumstances and with those around us united in the love of God.”

Bishop Rojas stressed that every Catholic has a duty to be a “missionary disciple,” using a favorite term of Pope Francis, and he said the Church’s mission is to bring Jesus Christ to “a world that is starving for God.”

“Our challenge as missionary disciples is to help the world distinguish between good and bad,” as well as to distinguish “good religion from bad religion.” To distinguish, he said, “and to listen to the voice that is coming from the Lord Jesus among the many other noisy and loud voices, and there are so many of them.”

To make his point, Bishop Rojas quoted a Bob Dylan song (“Gotta Serve Somebody”): “It may be the devil, or it may be the Lord, but you have to serve somebody.”

“Well, we want to serve the Lord. We are God’s children, we belong to him,” Bishop Rojas said. “The very day we were baptized the Lord Jesus said to us, you belong to me, you don’t belong to the devil.” 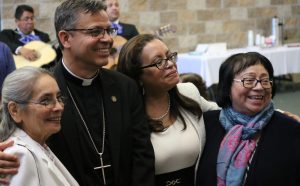 Mariachis serenaded Bishop Rojas as he posed for pictures at a reception after his Feb. 24 Mass of Welcome. (Pablo Kay)

At the reception after Mass, San Bernardino’s new coadjutor was greeted by a mariachi band, local Catholic students, tables with trays of Mexican “flautas” and Filipino “lumpia.” Dozens of families lined up for a blessing and a photo with their new shepherd.

Among those waiting in line for a blessing was 29-year-old Erika Regalado. She said Bishop Rojas’ words struck a chord in her own experience as a music coordinator in her parish, where she sees divisions even between younger and older music ministers.

Noting that Bishop Rojas appears to be “on the younger side,” she expressed hope that he will have “a good sense of how to bridge the different types of connections among people of different backgrounds.”

According to his family, from a young age the future bishop showed signs of a special vocation, in addition to talent as a musician and actor.

“He’s dedicated to helping people,” said Javier Luevano, who is married to Bishop Rojas’ niece and has known him since childhood in Aguascalientes. “Not to mix the political and the religious, but I would call him incorruptible. He’s just a good man.”

As he spoke, Bishop Rojas’ niece was sitting next to him, watching her uncle take pictures with relatives, friends, and even police officers. She had a simpler assessment: “Va a llegar muy lejos,” she said. “He’s going to go very far.”

Saint of the day: Nicodemus