If the bishops of California, Nevada, and Hawaii were hoping their recent trip to Rome would save the best for last, they were in for a disappointment.

The highlight of the “ad limina ad apostolorum” (“to the thresholds of the apostles”) trip to the Eternal City required of Catholic bishops every few years (officially five, but in the case of the U.S. bishops, it had been seven since the last one) is typically the audience with the successor of Peter himself.

Since Pope Francis became pope nearly seven years ago, pilgrim bishops have described the encounter as less formal and more freewheeling than in the past, with prelates encouraged to ask questions and speak their minds.

The meeting on Monday, Jan. 27, the first day of the tri-state Region XI bishops’ five-day visit, was no different.

“He’s such a free man,” remarked incoming San Bernardino Coadjutor Bishop Alberto Rojas after the meeting. “He answers all the questions and he doesn’t give you just a little answer. He gives you an answer that quotes the Bible, quotes the Fathers of the Church, it has personal experiences that he has lived. That in itself is really worth the whole trip.”

The 55-year-old Mexican native spoke from the peculiar place of having just made the same pilgrimage last month as an auxiliary bishop of the Archdiocese of Chicago, where he has served since 2011.

On Dec. 2, Pope Francis named him the next coadjutor bishop of San Bernardino. But until he is officially installed Feb. 24, his duties are split between Chicago and preparing for his move to the Inland Empire. 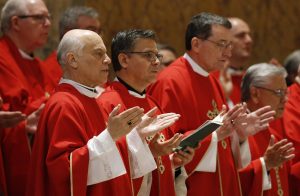 The papal audience can fall on any of the five days of the week, depending on the pope’s calendar. In the case of the Illinois bishops’ visit, it came on a Thursday. And while the December audience — held on the fourth day of the Illinois bishops’ visit, rather than the first —  was about two hours, 20 minutes, Bishop Rojas noted that this one clocked in at just over three hours, a fact that impressed the bishops.

“I was struck by how intensely he listened to us,” said Los Angeles Auxiliary Bishop Marc Trudeau. “In his responses, I think he was also thinking about questions that other [U.S. bishops] groups had made to him, so he gave us longer answers to our questions.”

“He told us we need to be close to four things: God, our priests, the people, and each other [bishops],” reported LA Auxiliary Bishop Alex Aclan, among the newest bishops of the Region XI group.

“I was even impressed in the very beginning by the fact that he said this is a conversation among brothers,” added Bishop David O’Connell during a group interview with four of LA's active auxiliaries at the Pontifical North American College in Rome, where the bishops stayed. “I can’t imagine me and him, being here. You’re a brother of the pope!”

Other bishops said the range of topics covered in the audience with Pope Francis included youth ministry, evangelization and proselytism, political engagement, the scandal of clerical sex abuse, the importance of sacramental life, and even troubling modern trends like suicide among young people. 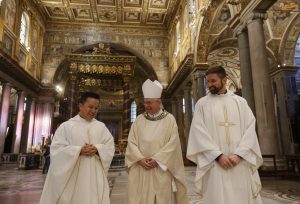 Archbishop José H. Gomez said migration was also an issue that discussed, with the pope telling them “how it's important for all of us in the church to be open and welcome immigrants.”

The pope, he said, “gave us some ideas on how to continue helping people to understand the reality of immigration,” but also spoke about how increasing polarization on the issue is found not only in the United States but in many parts of the world.

“He insisted to us that it is important to see the need for dialogue between people and to understand that we all are children of God,” Archbishop Gomez told Catholic News Service.

Throughout the long conversation, the bishops said, the 83-year-old pontiff’s energy never seemed to flag.

“He never seemed to get tired,” recalled LA Auxiliary Bishop Robert Barron. “His translator got tired, we were kind of uncomfortable in the chairs after a while, but he seemed to be completely at ease the whole time.” 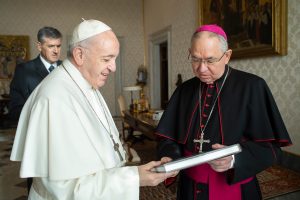 Archbishop José H. Gomez of Los Angeles presents Pope Francis with a copy of the book "The Spirit Within Saint Junipero," during a meeting with bishops from California, Hawaii and Nevada on their "ad limina" visit to the Vatican Jan. 27, 2020. The book is a collection of photographs that presents "close and detailed views of the places that formed" St. Junípero Serra, whom Francis canonized in 2015. (CNS photo/Vatican Media)

The audience with Pope Francis that morning came right after Mass at the Tomb of St. Peter beneath the main altar of St. Peter’s Basilica, the first of the four customary “ad limina” Masses celebrated at each of Rome’s papal basilicas.

In his homily, Archbishop Gomez of Los Angeles told his brother bishops that the tomb is a reminder that “the apostles were ordinary men.”

“As men, they had the privilege to know Jesus Christ and to be called personally by him, just in the same way we have been called to follow Jesus Christ, and we thank God for that grace today,” the archbishop said. “We come here to Peter, to be strengthened, to be supported, to renew our identity as apostles, as bishops and priests.”

The literal purpose of the “ad limina” visits is to pray at the tombs of Sts. Peter and Paul, the pillars of the Church of Rome. The Region XI bishops agreed the Masses celebrated at St. Peter’s and the Basilica of St. Paul Outside the Walls were the most moving and memorable for them.

“People keep talking about us here as the successors of the apostles, which is first of all pretty daunting,” Bishop O’Connell reflected. “But when you trace it back, Peter was so human in many ways. We can believe that the Scriptures are authentic because they don’t give an idealized picture of Peter. Filled with flaws, impetuous, his anger, his cowardice, and so you kind of get connected back to very human figures.”

Auxiliary Bishop Tim Freyer of the Diocese of Orange called the visits “a great consolation.”

“It’s still hard for me to imagine that God has chosen me,” Bishop Freyer said. “A couple of us bishops were talking that what gives us comfort and consolation is when you read the Gospels and realize that these men, when they were first called, weren’t saints either.

“That they had their disagreements, and their struggles, and their challenges. And God in his mercy has chosen them so that his glory can be manifested.” 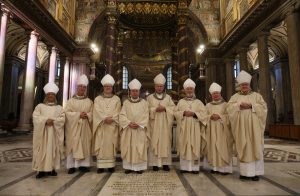 Bishops from Los Angeles gather for a group photo after concelebrating Mass at the Basilica of St. Mary Major while making their "ad limina" visits in Rome Jan. 30, 2020. (CNS photo/Paul Haring)

“For some reason, it grabbed me, to kneel there by the tomb of St. Paul,” said Bishop Barron. “The meetings were fine, but I found that very powerful and very rich, spiritually.”

Less exciting, Bishop Barron and his brothers agreed, were the visits to the different congregations and offices of the Roman Curia, intended to keep diocesan bishops and Vatican officials updated on one another’s efforts.

Like the audience with the Holy Father, the style of those meetings has also changed.

“You talk to the old-timers, the ones who’ve been through a number of these ‘ad liminas,’ and they often felt like they were just being lectured to at these meetings,” said Bishop Barron. “And we never felt that way.”

Bishop Barron described all of the meetings as “very positive” and recalled that the curial officials seemed interested in hearing from the West Coast bishops.

As a bishop for less than a year, Bishop Aclan said he was struck by the challenge the Holy See must face in trying to keep track of everything happening in the universal Church.

“We have enough trouble in LA, and that’s a small, small part of the United States!” 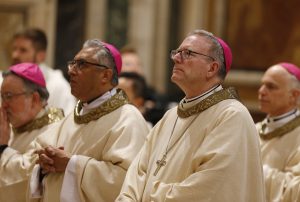 Bishops Trudeau and Barron said they were perhaps most “energized” by their meeting with officials at the Pontifical Council for Promoting New Evangelization.

“I found there was a real respect on their part for what we’re doing,” said Bishop Trudeau. “And a willingness and promise that they want to work with us for the betterment of the Church, for the advancement of the Gospel.”

As they prepared to head back to Southern California, the bishops said they were also grateful for the time spent together not only in meetings, but at Mass, in the bus, and in the dining room.

“It just cemented the bonds that we are supposed to have,” explained Bishop Aclan, who said that bishops he met for the first time on the trip made him feel like he’d known them for years.

“I think when you travel with somebody, you notice the fraternity when you’re on a pilgrimage,” said Bishop Trudeau. “This really was a pilgrimage.”

Fr. Jacques Hamel honored 5 years after he was killed at Mass in terrorist attack