Concerns mount over lack of COVID-19 protections for California farmworkers

José Ramos, a 41-year-old father of four from Honduras, works at a broccoli packing plant in Santa María, California. There he labors close to other workers who do the cutting and packing in a machine.

“There are three feet between us, at the most,” he said. “I try not to think about it, I concentrate on work and on moving fast.”

His employer did not offer any orientation about safety regarding the coronavirus (COVID-19), but he had purchased sanitizing gel and brought a made-at-home mask after hearing grim news reports from Spanish-language TV and radio.

It was mid-April when he was given a cloth “pañoleta” (neckerchief) by his boss with the directions to cover his nose and mouth. That was a month after California’s emergency measures started.

Francisco Machuca, on the other hand, works for a mid-size company in the strawberry fields in the same city. His employer has instituted a daily reminder of the prevention measures, disinfection of common areas, and a recommendation of keeping a distance of 6 feet between workers. Using masks when possible was also suggested, although they don't offer them.

“But it isn't always possible to keep the distance,” said the Mexican-born 45-year-old father of four. “Most farmworkers don't have a car and they carpool or use ‘raiteros,’ where four or five people travel in the same car.”

Agricultural workers are exempt from “stay-at-home” orders issued by many state and local governments to prevent the spread of the coronavirus because they are considered essential employees, but “social distancing” and other preventive measures, like the use of masks or repeated hand-washing, had not been implemented in all California farms for farmworkers as of mid-April.

The reach of basic coronavirus safety information in the fields for the hundreds of thousands of farmworkers in California has been uneven. In Santa Maria, where Father Rolando Sierra serves as associate pastor of two parishes (St. John Neumann and Our Lady of Guadalupe), “some employers have passed on safety information and practices, and others haven’t,” said the priest.

The fact that there were less than 100 reported cases in Santa Maria in mid-April, when Father Sierra spoke to Angelus, is a cause of concern for the Venezuelan-born priest.

“I feel that is one reason why there’s not enough consciousness about the pandemic. But we worry that when the new farmworkers with the visa program come in April and May for the season, that they will bring more infection with them. I wonder if they will be tested before arriving.”

The Church has been passing out masks to workers and partnering with the Foodbank of Santa Barbara County, delivering food to those who need it.

With the more labor-intensive farming season gearing up, many worry about what that means for the spread of the pandemic to agricultural areas, where numbers seem to be staying somewhat low by not having too many visitors from the outside, and probably due to a lack of widespread testing. 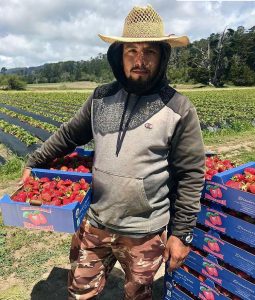 A farmworker in one of California's strawberry fields. (Courtesy: United Farm Workers)

Nearly 200 miles away in Fresno, smack in the middle of another of the state’s agricultural hubs, Genoveva Islas, director of public health advocacy for Cultiva la Salud worries that the farmworkers aren't safe and that if they are hit hard by the coronavirus, the food supply could be affected.

“In the Central Valley, we have 1% of the agricultural farmland and produce 25% of all the table food for America … anything that impairs our ability to do that will be catastrophic for California and the nation,” she said. “We don't have a lot of international flights or tourism here, but we need to protect our farmworkers’ safety.”

As a leading voice for immigrants and workers’ rights in California, Archbishop José H. Gomez of Los Angeles told Angelus that he is “deeply concerned about their health and safety and their working conditions during this pandemic.”

“Our nation’s farmworkers are absolutely essential to our economy,” the Mexican-born archbishop told Angelus in a statement. “This is a matter of human dignity and the security of our nation’s food system. I am urging government officials and farm employers to do everything they can to ensure to provide these men and women with adequate protections.” 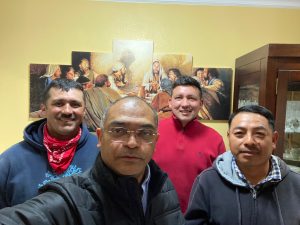 Farmworkers often work in conditions that make it very difficult for them to keep that safety, said Arcenio Lopez, director of the Organizing Project Mixteco/Indigena (MICOP) in Oxnard, Ventura County, where 60% of the workforce is indigenous. “We are 24,000 indigenous Mixtecos, Zapotecos, Otomí, Nahuatl, Purépecha, Amuzgos, among others,” he said.

“We continue going to work right now, primarily to the strawberry fields,” he said. “It's hard to keep a safe distance, there aren't enough masks. MICOP distributed many but we ran out. Schools are closed, so usually the mother has to stop working to take care of the kids.”

Some farmers are doing the right thing, providing protective gear and information, he added, but many independent contractors or small companies are balking at any new expense and ignoring the issue, he said.

Armando Elenes, the United Farm Workers (UFW) secretary treasurer, said the union conducted a survey among farmworkers and 77% told them their employer had not informed them or implemented practices to prevent infection.

That prompted the union to send out a letter to farmers. “Many told us that, at the most, they were told to sign a piece of paper that they had been educated about the measures and that was it,” said Elenes. “Farmworkers are used to working in any kind of condition; they risk it because most don't have any choice or benefits.”

In an April 14 op-ed in the Los Angeles Times, Marcela Celorio, consul general of Mexico in Los Angeles, called on these essential workers to have more protective gear and “to be considered a priority group to test for the coronavirus.”

In an interview after the op-ed was published, Celorio told Angelus that her office has been working to inform and educate the large community of Mexican farmworkers under her jurisdiction, which includes a consulate in the farming community of Oxnard, one hour northwest from Los Angeles.

Most farmworkers who are immigrants in California are Mexican-born, she said. “The consulate works to build bridges and alliances; we do so with public officials, the private sector, farmers, ranchers, agricultural federations so that they can facilitate our supervision of the conditions of farmworkers and allow us to hold workshops and conversations, in which we bring workers together to inform them of their rights.

“Our main concern at the moment, aside from using the mobile consulate to go to the farm areas and offer documentation, passports, etc., is how we can contribute to educate these workers and ensure they are safe and healthy,” she said.

“It’s also good to remember that our embassy in Washington lobbies the U.S. Congress to recognize the work of agricultural workers, and we do the same with the California legislature here in Sacramento.” 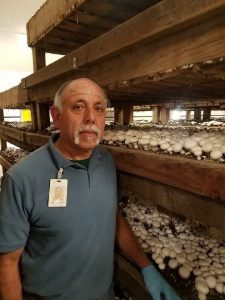 A California field worker in an undated photo provided by United Farm Workers.

Many see this as a reminder of the need to include farmworkers in any future legislation in response to the coronavirus pandemic and immigration reform. The Congressional Hispanic Caucus wrote a letter in April to the leadership of both chambers of Congress, reminding them that “Farmworkers need our support. They should not live in fear.”

“Our nation’s food security depends on the ability of farmworkers to continue to work safely to produce our nation's food,” reads the letter, signed by the 36 Latino members of Congress, who recommended financial assistance, support of child care needs, and additional funding for community health centers, as well as direct financial assistance to agricultural workers.

Experts, including the World Health Organization (WHO) and the U.S. Food and Drug Administration (FDA), have officially said that there is so far no evidence of food or food packaging being associated with transmission of the coronavirus.

A virologist specializing in community food safety at UC Davis, Dr. Erin DiCaprio, has pointed out that the virus isn’t foodborne but airborne, and simply washing the produce and washing hands when handling it is generally enough.

Estimates indicate that half of the agricultural workers in the nation are undocumented, and they are ineligible for many benefits, including unemployment assistance as well as the $1,200 stimulus check.

But the Trump administration has shown more willingness to help farmers than farmworkers. On April 15, the federal government announced temporary rules making it easier to hire migrant workers already in the U.S. working in different farms if their H-2A visas were set to expire. They make up about 10% of crop farmworkers and are brought in as work increases in April thru July.

The same week, a plan to allow a wage change that would reduce the minimum wage for farmworkers was leaked to the press, and although not yet implemented, advocates said some employers in the fields are already lowering wages. Farms argue they have economic trouble as the market for certain products gets disrupted.

On April 22, President Trump signed an executive order halting the issuance of green cards for people seeking to migrate into the U.S., but that doesn't include temporary workers, spouses, and minor children of U.S. citizens or health care professionals among other exceptions. A civil rights coalition has filed a lawsuit for a temporary restraining order on the ban.