Why we need the feminine genius

The COVID-19 pandemic, it seems, has spared no one.

Sure, some have been blessed to remain largely untouched physically or financially by the coronavirus pandemic. But the anxiety of these uncertain last few months, and the consequences of isolation and loneliness, seem to have found us all in some way.

As a result, the larger questions about destiny and meaning — ones that were dismissed more easily before — today ask to be revisited in a totally new context. After the bruising year that was 2020, those questions invite Catholics to reflect deeply about our place in the post-COVID world.

St. Augustine of Hippo lived in a time of chaos and civilizational collapse, marked by plague and political strife. His advice for times like these? Stay rooted in reality.

“Bad times, hard times, this is what people keep saying; but let us live well, and times shall be good,” he wrote in the year 410. “We are the times: Such as we are, such are the times.”

Such as we are, such are the times.

The great 20th-century philosopher Simone Weil described being rooted as the least recognized and yet most important need of the human soul. But what can help us fulfill this need?

Ironically, it was one of Weil’s admirers, St. Pope John Paul II, who argued that modern man’s loss of its own sense of humanity called for a “manifestation of that ‘genius’ which belongs to women.”

“It is commonly thought,” the Polish pontiff wrote in his 1988 letter “Mulieris Dignitatem” (“The Dignity of a Woman”), that “women are more capable than men of paying attention to another person, and that motherhood develops this predisposition even more.”

Throughout history, it is the genius of women that God has designed to continually root mankind in reality.

And this is reality: Because of Jesus Christ we are not victims of our circumstances. We are being found, cherished, healed, and saved. 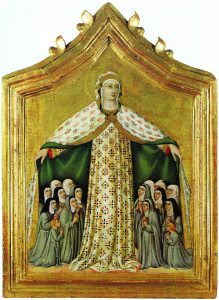 This is what women represent and do — find, cherish, heal, and save. Why? Because as German writer Gertrude von le Fort observed, “Wherever a woman is most profoundly herself, there she is also bride and mother.”

One of the greatest spiritual mothers is St. Mary Magdalene, celebrated liturgically as “the Apostle to the Apostles.” While the apostles were behind closed doors because of fear after Jesus’ execution, Mary “stood weeping outside the tomb” of Jesus. (John 20:11)

We perceive in her not so much fear or anxiety, but a solitude born from her affection for Jesus and the knowledge that only he could adequately respond to her insecurity. When her love and tears are rewarded, she becomes the first “testis divinae misericordiae” (“witness of divine mercy”), and then immediately evangelizes the apostles: “I have seen the Lord!”

This particular receptivity of women is why women have always been and will continue to be the engines of the Church in their capacity to generate something new by creating a space for the other.

It is always the temptation of the Christian to become self-absorbed, to focus on one’s weakness, to become angry at one’s limitations, and therefore behave negatively or reactively. Especially in times of crisis it is very easy to fall into obsessions with external solutions or placing one’s hope or certainty into politics or ideology. And since politics are ultimately worldly solutions to spiritual problems — wherever you happen to land in the public landscape — the Christian will always be dissatisfied.

At the end of the day, when all our ideologies and formulations fail, we are reminded that the other demands to be engaged on an emotional and spiritual plane.

And this is precisely the place where women are experts.

Women ground us and keep us in the right state of mind because they remind us of God when we have forgotten him in one another.

Consider the witness of Christian women in the early Church. Jesus treated women with the dignity their nature deserved and women ran with it and transformed the Church, the world, and the very empire that was crumbling before their eyes. They embraced their dignity and then generated a dignified civilization because of it.

This historical reality is why Archbishop Fulton J. Sheen noted that “to a great extent the level of any civilization is the level of its womanhood.”

The first Christians lived in a time of systematic persecution, plagues, famines, economic hardship, a culture of death with soaring rates of abortion and infanticide (of largely baby girls), and zero legal rights for women.

And yet, the Christian faith did not just survive — it flourished.

In the ancient world, a woman’s testimony meant nothing culturally or politically. So paradoxically, it was the witness and testimony of women that brought forth the newness of Christianity. The majority of converts and therefore evangelizers were initially women.

The witness of happy marriages and families attracted pagans to this strange new monotheistic faith, as did their often fearless charity in the face of deadly plagues. Infected pagans were often abandoned by their own families and ended up being cared for by Christians.

It seems in our own day, it will once again be the transcendental of the Good and not primarily the True or the Beautiful that will be most needed and persuasive for an unbelieving world.

The feminine genius is subtle in expression but phenomenal in consequence. It is impossible to recount all its manifestations throughout history, but for those who have eyes to see and ears to hear, the presence and prophetic power of women will always serve as a reminder that spiritual power is the only power and that faith is the victory that overcomes the world (1 John 5:4).

For this reason, we can rejoice at what God has done for us and what he is doing here and now, even in this. This particularly feminine perception and communication is a “vocation to the other” in a world in desperate need of motherhood.

Simone Rizkallah is the director of Program Growth for Endow. She blogs at www.culturalgypsy.com.