Why ‘San Martin Caballero’ is the saint we need this November

You may have noticed the picture of “San Martin Caballero.” It hangs in small businesses in Los Angeles and places further south, all the way through Latin America. In restaurants, groceries, and hardware stores it often occupies a space beside the image of Our Lady of Guadalupe.

St. Martin of Tours sits on horseback. He is a soldier dressed in armor, and he is using his sword to cut his cloak in half. A beggar, naked and cold, sits at his feet.

Not long ago I stood in line at a Mexican restaurant, and the man in front of me asked the meaning of the image. The owner told him the story in the same terms set down in the fourth century by St. Martin’s friend and disciple, Sulpicius Severus.

It took place at the city gates in Amiens, France, where St. Martin’s cavalry regiment was stationed. A poor man dressed in rags begged all passersby to have pity on him, but no one bothered to look at him, never mind give him anything.

St. Martin approached and saw the man shivering. A young soldier, he had no money and nothing else to share. So he took off his uniform cloak and used his weapon to slice it down the middle. Half he gave to the poor man, and half he wore back to his barracks.

Asleep that night, St. Martin dreamed that he saw Christ wearing the half-cloak with which he had clothed the poor man.

The meaning of the story is clear and bound up in the parable of judgment Jesus tells in St. Matthew’s Gospel: “Then the righteous will answer him and say, ‘Lord, when did we see you … naked and clothe you?’ … And the king will say to them in reply, ‘Amen, I say to you, whatever you did for one of these least brothers of mine, you did for me’ ” (Matthew 25:37–40).

It’s edifying, of course. But what does this story and this man have to do with small businesses in cities and barrios throughout our part of the world? It’s good for us to ask as his feast day, Nov. 11, approaches.

The answer takes us through the story of St. Martin’s adventurous life, and his even more adventurous afterlife. 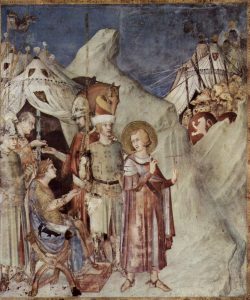 "St. Martin Leaves the Life of Chivalry and Renounces the Army," by Simone Martini. (Wikimedia Commons)

St. Martin was born in 316 in the city of Savaria (now called Szombathely in western Hungary). Savaria was the capital of the Roman province of Pannonia, and St. Martin’s father was a high-ranking military officer there. Both parents had aristocratic pedigrees.

The world was changing in 316. The new emperor, Constantine, had legalized Christianity and identified himself with the newly liberated Church. But St. Martin’s family still observed the old religion. They worshipped the many gods of the Roman pantheon.

As a young child, St. Martin encountered the Christian faith. We don’t know how or where, but by age 10 — much to the alarm of his parents — he decided he wanted to be baptized. So he went to the nearest church and begged to be enrolled.

While he was still a catechumen, he made the further decision to become a hermit. He was impeded only by the Church’s refusal — much to the relief of his parents — to permit such a young child to take vows. Still, they were put on notice. It was only a matter of time before their son would abandon them and their Roman traditions.

As St. Martin turned 12, the emperor issued an edict requiring the sons of veterans to be enrolled for military service. St. Martin’s pagan father seized the moment as his chance to sever his son’s contact with the Church. He informed on St. Martin, and at 15 the boy was taken away in chains and compelled to take the oath of a soldier.

The army had great expectations for him, coming as he did from such a distinguished martial family, and he was enrolled in the imperial guard under Emperor Constantine.

He served faithfully, and he went where he was sent. It was during one of his troop movements that he encountered the beggar at Amiens. After that incident, however, he knew his days of soldiering were numbered. His commanding officer was nearing retirement and asked St. Martin to stay at least till then.

St. Martin agreed and continued in the saddle for another two years. Once he had fulfilled that obligation of loyalty, he made a decisive break, saying, “I am the soldier of Christ. It is not lawful for me to fight.” 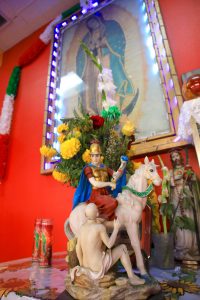 Our Lady of Guadalupe watches over a traditional figurine of St. Martin of Tours at "Los Compadres," a Mexican restaurant near LA's Placita Olvera. (David Amador Rivera)

He sought a Christian master and found one in St. Hilary of Poitiers, a bishop and one of the most brilliant theologians of his time. Under St. Hilary’s direction, St. Martin, now 40 years old, made missionary trips to convert Arian heretics to the true faith.

In time he fulfilled the vocation he had discerned as a child. He took up the ascetical life in a monastery in southeastern France. This is the earliest monastic community in Europe that can be dated with certainty. St. Martin was soon chosen as its superior.

Word spread of his holiness, his wisdom, and his love for the poor. Eyewitnesses testified also that he was a worker of miracles. His kiss once cured a leper. Once a mere letter from St. Martin cured a leper!

Though he wished to finish his days as a monk, he was inevitably named bishop of Tours.

It could have been a cushy job. Christianity was now the favored religion of the empire, and the clergy were prime beneficiaries. The days of persecution were long past; they now enjoyed status, comfort, and a hefty stipend.

But St. Martin would have none of it. He continued to live a rigorously ascetical life, practicing voluntary poverty and placing himself at the service of those who were involuntarily poor. He also committed himself and his Church to the work of evangelization.

He pressed into the rural areas nearby, where people still had not heard the gospel. The ex-military man was now an avowed pacifist, but he didn’t hesitate to take up a hammer to destroy pagan shrines that were leading ignorant people to bad morals.

Yet he was willing to argue for the right to life, even for his enemies. In vain he urged the Spanish bishops not to turn the heretic Priscillian over for execution.

All of this roused his people to love St. Martin, and his clergy to envy and resent him. He died in the year 397, and his tomb soon became a destination for pilgrims. Aside from the Virgin Mary, he was the first saint not a martyr to attract such a large following.

Many people claimed miracles through his intercession or through contact with his relics. His friend Severus wrote a biography, and later St. Gregory of Tours made a catalog of the miracles attributed to St. Martin.

The first French dynasty of kings, the Merovingians, chose St. Martin as a patron. The Irish claimed that their own St. Patrick was St. Martin’s nephew.

In the Middle Ages, as the Church sought to convert the warrior tribes of barbarian Europe, preachers pointed to St. Martin as the model Christian knight: morally upstanding, merciful to enemies, and kind to the poor. 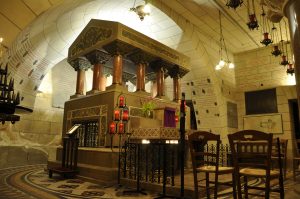 To the French he was always beloved. But there was a surge in his devotion in the middle of the 19th century, when his tomb was dramatically rediscovered. Once again he emerged as the patron of the military, the very model of a modern Gallic soldiery. Troops were taught to say a litany of St. Martin that addressed him as “generous soldier of Jesus Christ” and “perfect model of fighters.”

In Tours during the Franco-Prussian War, there were weekly Masses in honor of St. Martin. After the war it was common for veterans to make pilgrimage to Tours and leave a token of their survival at St. Martin’s shrine.

This martial devotion developed into an unofficial Catholic men’s movement in France. St. Martin seemed to embody many masculine virtues. The French continued to honor the saint during the later, more brutal World War I, and they took it as a sign when the war-ending armistice was signed on his feast day, Nov. 11, 1918.

Marshal Foch, commander-in-chief of the allied forces during World War I, asked for a memorial to be placed at St. Martin’s Basilica in Tours.

Through centuries when men were the breadwinners in most families, St. Martin stood as a patron for laborers, merchants, and people who were looking for professional opportunities. He became their intercessor, their model, their protector, and their guide.

And so he remains today. He was a man completely invested in the betterment of his community. He cared for the poor in heroic ways. In short, he constantly witnessed the Gospel.

He’s just the kind of patron a business needs as it emerges from a pandemic lockdown.

And if he could bring an end to a world war — as the French believed he did — perhaps he can also bring peace to a divided people.

Now, next time you see his image above a cash register, you’ll know why it’s there.