No coincidences: What Christians can learn from the land that raised Jesus

During his time on Earth, Jesus of Nazareth grew up, worked, and preached throughout a region in the Middle East that we today call the “Holy Land.”

But another name sometimes given for present-day Israel is the “Fifth Gospel.” As any Christian who has made a pilgrimage to Israel will tell you, the land of Jesus itself speaks almost as eloquently about him as the other four Gospels. Its ancient cities, ruins, shrines, and landmarks all help us know Jesus as a person better: his Jewish faith and culture, his miracles, and his own words.

One of those places is the Mount of Beatitudes overlooking the Sea of Galilee. Today, the site is home to the Redemptoris Mater Seminary of Galilee, where the next generation of Catholic priests for the Holy Land are formed and educated.

If there’s anyone who knows the Fifth Gospel, it’s the seminary’s rector, Father Francesco Voltaggio. Originally from Rome, Father Voltaggio is the author of several books on the Jewish culture of the time of Jesus.

Father, you’ve lived in Israel for more than 20 years now and written a lot about the Jewish roots of our faith. What has been the biggest discovery or revelation for you personally that has come from living and studying there?

How much does geography matter in understanding Jesus and his mission?

Almost all the events in the life of Jesus cannot be fully understood without a knowledge of the places where they occurred.

A good example is Jesus’ baptism. The Jordan River is located at the bottom of the Rift Valley, considered the deepest cut, the deepest “wound” on the Earth’s surface. This is where Jesus is hailed by John as the one who takes away the sins of the world. It is no coincidence: Christ descended all the way to our deepest wounds, penetrating into the folds of humanity, where he takes upon himself the sins of the world.

Another example is the episode of Zacchaeus, which takes place in Jericho, the lowest and very possibly the oldest town on Earth. Here Jesus meets a man, Zacchaeus, who was short and had spent his life trying to climb up the social ladder, becoming a chief tax collector.

Jesus meets this man at this low point, both literally and figuratively, and yet even there he manages to put himself underneath him. Zacchaeus had climbed a tree to see Jesus, so Jesus must literally look up to him to meet Zacchaeus’ eyes. Jesus, who is God, descends to the lowest point on Earth to meet a sinner, Zacchaeus, and he conquers him not only by not judging him, but by loving him to the point of making himself smaller than him.

The geographical setting enhances our understanding of this episode, but most of the details are lost on those who ignore the geography of the Holy Land. 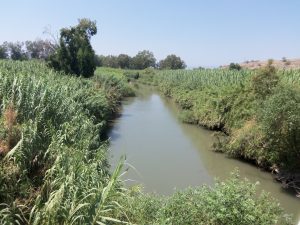 An area of the Jordan River near where tradition holds that Jesus was baptized. (Fr. Davide Meli)

What about Jesus’ Jewish background? How important is it?

Very. Scholars have tended to pay more attention to the Greco-Roman context, and for good reason, at the expense of the Jewish background. But research on the “second temple” era of Judaism (from 538 B.C. to A.D. 70) has made a lot of progress lately, thanks to major discoveries such as the Dead Sea scrolls, but also thanks to a renewed interest in Rabbinic literature, which, although compiled at a much later date, still likely reflects debates and discussions going on at the time of Jesus.

We cannot ignore that the authors of the Gospels and their early audiences not only had a profound knowledge of the ancient testament and of the Jewish liturgy, but they were also acquainted with the interpretation of the Old Testament propagated in the oral tradition. Jesus constantly engaged these oral traditions, which would have been familiar to his disciples and are therefore crucial for a full understanding of his words.

Can you give an example?

Take the Sermon on the Mount. There is a very close relationship between Mount Sinai, where the people of Israel receive the Law, and the Mount of Beatitudes, where Jesus reveals the ultimate interpretation of the Torah. This is visible at every step in the Gospel accounts.

There is a somewhat odd turn of phrase at the beginning of the episode in Matthew. In the Greek original it reads: “He went up the mountain and sat down … and having opened his mouth he taught them saying.”

In most translations the sentence is abridged into “he sat down and taught them.” Why is the mouth of Jesus mentioned, though? And why the emphasis on going up the mountain? Well, a Jew would have understood immediately. The Jews had been taught that on Mount Sinai, God gave Moses not only the written Torah, but also its interpretation, the oral Torah, which they believed had been transmitted to him “from mouth to mouth,” from the mouth of God to that of Moses. Moses in turn transmitted this teaching to Joshua, who then passed it to the greater assembly, and from there down the line from rabbi to rabbi.

Many Jews believe that at the end of this chain stands the Messiah, the ultimate rabbi, the one who will come and provide the definitive interpretation of the Torah. And some Jewish commentators say that this final interpretation will be so beautiful that it will be called a New Torah, a new Law.

And yet the Sermon of the Mount seems very different from what God taught Moses on Sinai. The beatitudes do not look like commandments at all.

On the contrary, when Jesus says “blessed are you,” he is saying something that is deeply consistent with Jewish ideas about the Torah.

We tend to understand the commandments, and the Torah more generally, as a set of rules, a list of prescriptions. And yet the first and most important commandment recites: I am the Lord your God, the one who freed you from Egypt.

It is not a prescription at all. Then why is it referred to as the first commandment? The rabbis answer that the first step is for God to reveal himself, to save us from our slaveries, just as he freed the people of Israel. In a word: to make us happy. Only when God has revealed himself to us and freed us from our slaveries, after he has made us “blessed,” are we able to fulfill the commandments.

That is why Jesus begins by saying “blessed are you.” He is the one who comes to free us from our slaveries, he is the ultimate manifestation of the God of Sinai, who makes us “blessed.” Only once he’s done this will we be able to fulfill his new commandments.

When you look at the Sermon of the Mount in the light of the rabbinic tradition, Jesus doesn’t come across as a moralizer or a legislator. He appears as the Son of God, who was made man so he could give us his Holy Spirit and could write this law on our hearts of stone. 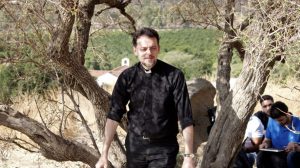 The way you read the Sermon of the Mount in continuity with the Old Testament is surprising. Many people tend to understand this passage as positing a number of antitheses between Jesus’ teaching and the Jewish Law. “You have heard … but I tell you. …”

That is again because we misunderstand what the Torah is. The Torah in Hebrew is a teaching, which contains first the history of salvation, and then the Law.

Of course, both for Jews and Christians alike the temptation always existed of reducing the Torah to a set of laws, to a code. But St. Paul never taught that the Torah and Grace are in contradiction. On the contrary, he writes that Christ is the fulfillment of the Law. St. Paul opposes the idea that we can be justified by fulfilling the prescriptions of the Law, because he believes that no one can truly fulfill the Law relying on their own strength.

When it comes to the Law, the difference between Judaism and Christianity has more to do with what allows humans to really fulfill the Law, rather than with the actual prescriptions. Great Jewish scholars such as A.J. Heschel said that man has to become an incarnation of the Torah. This is true in a more profound sense for us Christians, because the spirit of sanctity that animated the Torah in the Pentecost descended in the hearts of the disciples.

Today, this same Spirit, through the word of God and the sacraments, descends in our hearts and we become a temple of the Holy Spirit. Jesus Christ has made out of us living temples, we become the “sancta sanctorum.” In other words, you could say that the difference between Judaism and Christianity lies in the paschal mystery, provided that we do not forget the final accomplishment of the paschal mystery: the descent of the Holy Spirit.

What can the Church today learn from an encounter with the Jewish tradition?

I think the most important gain would be to rediscover the idea of initiation, which was crucial both for Judaism and for the early Church.

For the Jews, Moses’ 40-day long encounter with God was difficult to communicate in its entirety and depth. It took time and a gradual process. In the New Testament Jesus initiates the apostles, who in turn do an initiation to their disciples and this will eventually develop into the catechumenate, the path of initiation through which people were prepared to receive baptism and were initiated to the mysteries.

I think recovering the idea of Christian initiation would go a long way in settling some of the current disagreements between so-called liberals and conservatives within the Church.