ROME — From a journalistic point of view, a consistory, meaning the ceremony in which a pope creates new cardinals, almost by definition is anti-climactic. The news comes a month or so earlier when the names are announced, setting off the inevitable cycles of “Why this guy and not that one?” and “Who here could be the next pope?”

By the time the red hats actually get distributed such talk largely has run its course, and sometimes even seasoned Church-watchers are tempted to tune out.

This is the Pope Francis era, however, which means you’ve always got to stay on your toes. So it was last week with the pontiff’s eighth consistory, which managed to generate a striking degree of interest — mostly, as it turns out, for what didn’t happen rather than what did.

To begin with, this wasn’t your ordinary consistory.

Pope Francis combined the ceremony with two other events, first a day trip on Aug. 28 to the central Italian city of L’Aquila — noteworthy as the final resting place of Pope Celestine V, the last pope to voluntarily resign the papacy before Pope Benedict XVI — and two days of meetings Aug. 29-30 with most of the world’s cardinals, some 200 in all, to discuss Vatican reform.

Along with his age and increasing physical limits, the outing to L’Aquila originally sparked speculation that Pope Francis might use the gathering of cardinals to announce his own resignation. By the time it actually happened, however, he’d batted down that idea in a series of media interviews — and, in fact, he went to L’Aquila and came back without any talk of stepping aside.

By that point, however, the idea that something big must be in the works had taken hold, leading to considerable guesswork in the Italian media and elsewhere about an “August surprise.”

In part, that’s due to the fact that consistories traditionally are held either in late February, around the feast of the Chair of Peter, or late June, to coincide with the feast of Sts. Peter and Paul. On other occasions they might be in October, especially if there’s a Synod of Bishops going on that requires many of the cardinals to be in Rome anyway. 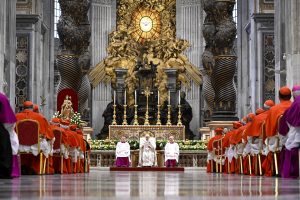 Pope Francis leads a consistory for the creation of 20 new cardinals in St. Peter's Basilica at the Vatican Aug. 27, 2022. (CNS photo/Vatican Media)

Late August thus is an odd moment, particularly in light of the deeply rooted Italian tradition that August is vacation month when few natives are actually left in Rome.

(Fun fact: The last August consistory was 215 years ago, under Pope Pius VII in 1807, and that was a private ceremony to create just one cardinal “in pectore,” meaning secretly. The choice fell to Francesco Cavalchini, who effectively ran the city of Rome in the name of the pope and who couldn’t be named publicly because he was enormously controversial. One observer at the time described Cavalchini as “deranged” and a “madman” who “had people chained, beaten, and whipped on a whim, for even just a word or a gesture.”)

Given the unusual moment for a consistory, many pundits surmised Pope Francis must have something up his sleeve.

What might that be? Some thought he might be preparing a major shakeup of his Vatican team, others that he might finally be ready to pull the trigger on some doctrinal innovation — ordaining women deacons, perhaps, or the sweeping rethink of “Humanae Vitae” (“Of Human Life”) that’s long been a staple of the Roman rumor mill.

Still others wondered if this would be the moment for Pope Francis to decree new rules for the office of emeritus pope. In a recent television interview he seemed to hint at that possibility, praising Pope Benedict but adding, “In the future, things should be delineated more, or things should be made more explicit.”

In the end, the biggest “August surprise” has turned out to be the absence of a surprise, as none of those rumored earthquakes materialized.

In terms of what did happen while the Princes of the Church gathered, reports suggest they largely stuck to their brief of discussing “Praedicate evangelium” (“Preach the gospel”), the pope’s March 19 document outlining his reform of the Vatican.

To the extent there was any tension, it centered around provisions of “Praedicate evangelium” allowing laity to head Vatican departments. More traditionally-minded prelates argued that since some of these departments exercise vicarious authority in the name of the pope, the prefect should be part of apostolic succession and in holy orders. Others made the more practical point that it might be a bit awkward to have visiting cardinals effectively taking instructions from lay people.

In the end, a majority seemed to support the idea that while certain key departments perhaps still should be led by a cardinal — the Dicastery for Bishops, for instance, or Clergy, or Divine Worship — other offices, such as the Secretariat for the Economy or the Dicastery for the Family, easily could be, and perhaps even should be, run by laity.

But while there was discussion along those lines, reports suggest no major ruptures. 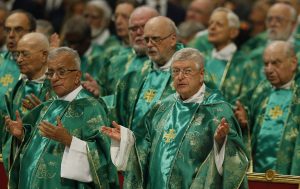 A couple of cardinals did make more controversial suggestions. German Cardinal Walter Brandmüller, for instance, proposed that only cardinals living in Rome should be allowed to vote in the next conclave, suggesting that because so many of Pope Francis’ picks come from faraway places with little experience of the Vatican, they could be easily manipulated by unnamed “lobbies.”

One certainly has to give the 93-year-old Cardinal Brandmüller credit for chutzpah, effectively telling a broad swath of his fellow cardinals, to their face, that he doesn’t trust them to pick the next pope. Yet while they heard him out respectfully, there’s no indication his proposal had much traction.

In other words, there just weren’t many fireworks. The real question, therefore, is how to read the relative calm.

Does it reflect a College of Cardinals largely content with the status quo, with their silence signifying consent? Or are at least some prelates simply laying low, awaiting a different moment to tip their hands?

That, alas, is a question to which late August 2022 didn’t actually provide an answer — but time, inevitably, will tell.