The word ‘Eucharist’ and the ultimate thanksgiving

The U.S. bishops are encouraging Catholics to deepen their love for the Eucharist as part of the ongoing National Eucharistic Revival initiative. In light of that effort, the following is the second in a series from Angelus contributing editor Mike Aquilina on the meaning and makeup of the Eucharistic Prayers.

“Eucharist” is a strange word in English. It doesn’t follow the usual rules of pronunciation. It has clearly been borrowed from another language. If it seems ordinary to Catholics, it is only because we have heard it, spoken it, and seen it in print since childhood.

Its origin, in fact, is Greek, and its Greek meaning is very simple: thanksgiving.

But in the ancient world it had other shades of meaning, especially when it was used to denote thanksgiving directed to God.

Jews living outside the Holy Land used the word to speak of the ritual sacrifices offered to God in the Jerusalem Temple. It was a favorite term of Philo of Alexandria, an Egyptian Jew of the first century. For Philo, “eucharistia” could refer to animal sacrifices, offerings of incense, or even offerings of vocal prayers.

But he found it especially applicable to the sacrifice known in Hebrew as the “todah.”

Temple sacrifices generally fell into two categories: “sin offering” and “thank offering.” The “todah” was the greatest thank offering, and it was the sacrifice most characteristic of the religion of Israel during and after the reign of King David.

The “todah,” however, consisted of an offering of bread and wine, presented at the Temple along with a “new song” composed for the occasion — usually a healing from sickness or deliverance from danger. The Old Testament speaks of these sacrifices (see, for example, Amos 4:5), and they appear often in Jewish literature outside the Bible. Some Jewish translations of the Bible into Greek use the word “eucharistia” primarily to render the Hebrew “todah.”

So what happened to the “todah” sacrifice? The French historian Jean LaPorte explained: “The destruction of the Temple … put an end to the role of todah in the Jewish community.” The invading Romans leveled the central sanctuary of Judaism in A.D. 70. “But todah was welcomed in the Christian community, for which the true Temple was the body of Christ.”

Already by that time, the first generation of Christians — most of whom were Greek-speaking Jews — were using “eucharistia” to describe the essential rite of their assembly. The “Didache” is a text whose ritual elements were probably set down no later than A.D. 50, and it uses “eucharistia” in its account of the bread and wine offered at Mass. 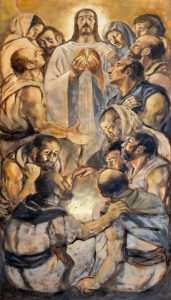 "The Last Supper," by Onofrio Bramante, in the Basilica del Sacro Cuore in Paris, France. (Shutterstock)

All the language of “thanks” requires various forms of the word “eucharistia.”

The earliest Christian generations are consistent in their use of the term. St. Ignatius of Antioch, writing in A.D. 107, speaks of the “eucharistia” as the essential act of the Christian assembly. For him the very mark of heresy was disregard for the Eucharist.

“Now note well,” he said, “those who hold heretical opinions about the grace of Jesus Christ that came to us, note how contrary they are to the mind of God … They abstain from the Eucharist and prayer, because they refuse to acknowledge that the Eucharist is the flesh of our Savior Jesus Christ, which suffered for our sins and which the Father by his goodness raised up.”

The same words bear the same meaning in the majority of Christian writers from that time: St. Justin Martyr, St. Irenaeus of Lyon, Tertullian in North Africa, St. Hippolytus in Rome. St. Justin even coined a new Greek adjective to describe the bread and wine used in the Mass. He called them “the eucharisted elements.”

The usage is consistent through generations and throughout the Christian world. It is not a local eccentricity or passing fad. It is simply what Christians have always done. They offer the Mass as their thanksgiving, and so the word “eucharistia” comes to define this most characteristic action.

Still today, gratitude is a hallmark of the Church’s Eucharistic Prayers. They begin with a dialogue in which the congregation says, “Let us give thanks to the Lord our God.” The priest proceeds from the dialogue to a preface that proclaims, “It is truly right and just, our duty and salvation, always and everywhere to give you thanks, Father most holy, through your beloved Son, Jesus Christ.”

In the long Eucharistic Prayers that follow, the priest offers thanks for many things: creation, salvation, and even for God’s mercy in counting “us worthy to be in your presence and minister to you.”

Thus, the Church joins the great thanksgiving of Christ, the Son, to his eternal Father. St. Paul could do no better. On a ship in danger of capsizing, “he took bread, and giving thanks to God in the presence of all he broke it and began to eat” (Acts 27:35).