The promise of Easter after my family's long Lent

As the coronavirus (COVID-19) continues spreading, infecting, and killing thousands of people all over the world, many have taken to assuring themselves, and one another, saying things like “It will be OK,” and “We’re going to get through this.”

But with thousands, perhaps hundreds of thousands, expected to die before civilization turns the metaphorical corner in combating this plague, what does “OK” really mean? Is this something that we human beings blindly tell ourselves to avoid falling into despair? Or do we really believe that no amount of physical death — especially involving the loss of loved ones — can get in the way of things someday being OK?

For a Christian with faith, the final outcome is assured. And it will be far greater than OK. We have the certainty of the resurrection, the victory of Christ over death, the pledge of eternal life in heaven with God himself.

These things have been on my mind over the last several weeks, since I saw a picture of a sign posted outside a house in pandemic-ravaged Italy that read, “Andrà tutto bene,” which translates roughly to “Everything’s going to be OK.”

As editor-in-chief of Angelus, the last thing I would have planned for the Easter issue was a first-person essay with details of my personal life. But planning, it seems, is a pretty useless venture in 2020.

As every day brings more stories of tragedy, unimaginable suffering, and prayers that seem unanswered, I can say that my experience has been one of hope, even though I’ve experienced my own share of tragedy and loss.

For me, this difficult year started before the arrival of the coronavirus.

The day before New Year’s Eve, my sister delivered her second child, a beautiful girl named Maria de los Ángeles, stillborn at 38 weeks. It was a shock to everyone. No health problems were detected during pregnancy and, to this day, after a battery of tests, we don’t know why Maria’s heart stopped beating in the womb two days earlier on Dec. 28, the day the Catholic Church celebrates the feast of the Holy Innocents.

I was blessed to hold little Maria for the few hours we got to spend with her that night at the hospital, to kiss her, to laugh and cry with her parents and grandparents. We proclaimed the Scriptures and prayed the prayers the Church provides for cases when children do not live outside the womb, and thus are unable to be baptized.

Several days later, we celebrated a funeral Mass for Maria at Holy Cross Cemetery in Culver City, not so much to pray for her soul — which we are assured is in heaven — but to ask for the strength to truly offer her back to God, to thank him for sending her, and to accept the painfully short duration of the earthly mission that God entrusted to her. Guests remarked to me afterward how moved they were to see the chapel filled with families, young and old, singing and celebrating the gift of little Maria’s brief life.

My boss, Archbishop José H. Gomez, just happened to be celebrating a funeral for a priest in the same mortuary chapel immediately before our service for Maria. He greeted our family, encouraged us, and gave us a blessing. “She’s an angel!” he reminded us. 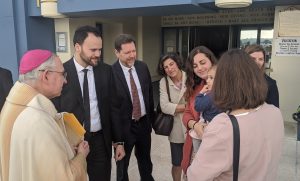 For my family, Maria’s death was the first call to “wake up,” to invoke the image Pope Francis used in his March 27 “urbi et orbi” reflection, praying for an end to this pandemic.

Reflecting on the passage in Mark’s Gospel of the disciples panicking in the boat while Jesus slept during a dangerous storm, the Holy Father said, “Like the disciples, we will experience that with him on board there will be no shipwreck. Because this is God’s strength: turning to the good everything that happens to us, even the bad things. He brings serenity into our storms, because with God life never dies.”

After all the tears and “what ifs,” especially for my sister and brother-in-law, whose excited anticipation for a new baby have faded to the reality of missing their daughter every day, the Holy Father’s words rang true to me.

As I watched the prayer service in Rome from my couch in Los Angeles, I thought: This is faith. It does not mean knowing every detail of doctrine, or following a long list of rules, or saying the right prayers.

Rather, it is the certainty that with God, life truly never dies, that he wants to take human tragedies like Maria’s death and everything that happens in our lives and use them for our good and the good of others, even if we have to wait years to understand the “why.” It is giving a "thumbs up" to God in every moment, including when the cross comes.

Little did we know that the Lord was preparing still another cross for my family to carry.

In early March, as cases of the coronavirus began to spread in Europe, we learned that the virus had entered the house of my aunt and uncle in Madrid, where their five daughters and grandmother also lived. The whole household experienced the symptoms associated with the virus, but my abuela Amparo and tío Pedro were most affected. They were taken to separate hospitals, both with respiratory problems.

Here in LA, waiting for the next Whatsapp message, the next phone call, was agonizing. It was unthinkably harder for my aunt and cousins quarantined in their house back in Spain. Under hospital protocol, my grandmother and uncle were not allowed visitors, under any circumstance. News on their respective conditions was delivered once a day via a phone call from hospital staff. Depending on the day, we received messages that gave us hope, or indicators of grave concern, and requests for more urgent prayers. The lack of personal contact, the long delays between updates, all made it impossible to know how either was really doing. 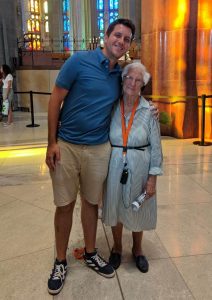 Pablo Kay with his grandmother Amparo during a visit to the Basílica de la Sagrada Família in Barcelona, Spain, in August 2019. (Pablo Kay)

While we mourned her passing, we spent that weekend praying more intensely for my 61-year-old tío Pedro, a retired military officer, father of six, with his first grandson on the way, a man with a faith even stronger than his no-nonsense personality.

We were consoled to learn that a priest had been allowed to visit Pedro in the hospital and give him the anointing of the sick. But we also knew that didn’t bode well for his chances of survival. On the morning of March 23, as my aunt and her children were returning from burying my grandmother — she was laid to rest with my grandfather, who died 20 years ago — they received the call that Pedro had died.

The days that followed involved a lot of tears. Two people who had taught us what true love and true faith looked like, were suddenly gone. And here we were, stuck in our homes in different parts of the world. We never got to say goodbye and now we could not even console one another in person.

These days also involved some laughter, memories we shared with them, funny things they said, and so many long conversations, the best of which always lasted late into the night (in true Spanish fashion). But there was one thing I didn’t expect in these days following their deaths: an overwhelming sense of peace.

Where did this tremendous consolation and serenity come from, not only for me but for my entire family? Certainly, we were helped by the flood of prayers from so many, including people we’d never met, including entire convents of cloistered women religious around Spain who’d benefitted from my uncle’s quiet generosity. We received letters, messages, and phone calls from friends who’d heard the news. There were Masses offered for my uncle and grandmother by priests, bishops, and cardinals that my extended family has come to know through their missionary work in various parts of the world. Even the Denver Broncos — my uncle and his only son were dedicated fans — sent condolences.

I write this to give thanks to God for his faithfulness to my family, in spite of my sins and all the imperfections in my family. I also write because I know that tragedies like what we suffered may well befall some of our readers and their families in the weeks and months to come, as the coronavirus continues to ravage the world.

Looking back on our experience of this trying year, all the prayers and encouraging words surely helped. But all this hope has a source, an event that has changed human history and every year comes with strength to change our individual lives: Easter. 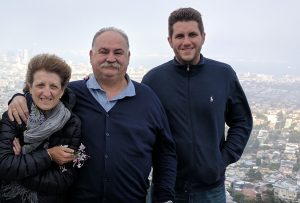 On the day of Pedro’s death, my uncle’s pastor remarked in his homily that the faith that Pedro had — the faith of the Church — was not some “consolation that’s the only thing left to us after his departure.”

“It is,” he said, “the deep certainty that illuminates all the situations in our lives, especially the dark tunnel of death.”

The night of Easter, the much-awaited fourth night of faith in the ancient Jewish tradition, doesn't mark some kind of mere memorial. It testifies that there is One who has entered death for us and come out victorious. And his victory reveals to us that our lives are far more than the flat, terrestrial spectrum we make of them, with our fleeting plans, ideas, and dreams. The resurrection tells us that we don’t have to be slaves to sin, that there is One who passes on this night with power to offer us new life with him, not only after our passing from this world, but before it, too, through the help of the sacraments and of his word.

Without the experiences of these last three months, this would sound like so much pious babble to me, as it may sound to you. These deaths came into my life as “mini-crosses” that I knew I was free to carry or reject. And what do they tell me? That life doesn’t end on the cross. As Pope Francis said, if we have Jesus on board the boat of our life, we know “there will be no shipwreck,” that the “bad” can be turned to “good,” and if we stay close to him in his Church, which is his living body and family, things will always be much more than OK.