The story of ‘The Four Nights’ of Passover

“We overcame Pharaoh … we will overcome the coronavirus with God’s help.” So said Israeli Prime Minister Benjamin Netanyahu at a press conference in Tel Aviv March 25.

“Remember the marvels the Lord has done!” (Psalm 105:5). So we say in our responsorial psalm, as we recall the events of the Passover and Exodus, Israel’s liberation from slavery in Egypt. So have our spiritual ancestors done for millennia. It is what Jesus learned to do as a child.

We remember not because we are stuck in the past, but because memory gives us wisdom and strength for facing the future. When we remember the extraordinary manifestations of God’s power, we go forward with confidence, even in weakness and fear.

English is one of the few languages that assign different names to the Jewish Passover and the Christian Easter. In Albanian, Danish, Dutch, Finnish, Greek, Icelandic, Italian, Kazakh, Spanish, Swahili, Tajik, and Uzbek, the word for both is the same. It is some derivation of the Hebrew “Pesach” (for example: “Pascua” in Spanish, “Pasqua” in Italian).

For the first Christians the feast was the same. They were Jews, like Jesus. The holiday they had celebrated as children was now transfigured and fulfilled. The mystery of Jesus was the mystery of Passover, completely revealed in the Messiah’s suffering, death, resurrection, and ascension into glory. Even today we refer to this core of our faith as “the Paschal Mystery.”

The Jews of Jesus’ time saw the mystery not only as a national holiday. It was something woven into the fabric of the universe. It had been there, hidden in plain sight, since the Big Bang. And God had marked the Passover twice, even before the Exodus.

On Passover in the first century, the Jews in Palestine commemorated the Exodus, but not only the Exodus. They praised God for his power evident in “The Four Nights,” four distinct events separated by hundreds and even thousands of years.

“The Poem of the Four Nights” appears in the first-century books known as the Targums. These were paraphrases of the Hebrew Bible, rendered in the Aramaic language in those years when few Jews could speak or read classical Hebrew. The Targums were the way ordinary people kept memory alive, the way they remembered the marvels the Lord had done.

The “Poem” first appears as an insertion in the text of the Book of Exodus. It intrudes in the midst of the instructions for the celebration of Passover (12:42). The biblical text reports: “This was a night of vigil for the LORD, when he brought them out of the land of Egypt; so on this night all Israelites must keep a vigil for the LORD throughout their generations.”

And then comes the “Poem.”

There are, it states, “four nights that are written in the Book of Memories.” There are four key turns in God’s story, states the poem, and each takes place on the date of the Passover, the 14th day in the Hebrew month of Nisan.

“The First Night” is the night of creation, when God revealed himself as hovering over the darkness of the waters. Thus, the event of Passover began at the beginning of everything.

“The Second Night” is the night of Abraham’s testing at Mount Moriah, when he bound his son Isaac and offered him as a sacrifice.

“The Third Night” is the night of Israel’s deliverance from Egypt, the moment traditionally associated with Passover.

And “The Fourth Night” was — in the early first century, when the Targums were written — still to come. It was the night of the Messiah, “When the world will reach its fixed time to be redeemed; the iron yokes will be broken, and the evil generations will be destroyed.” 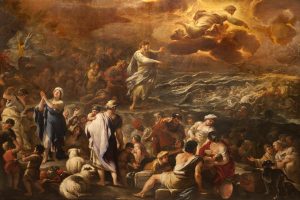 The Christians of the first generation bore witness to that moment, and it took place, as predicted, on Passover, the 14th of Nisan. It was as if they had been rehearsing for it all their lives. It was as if their families had been expecting it for centuries. And then it came, exactly according to plan.

The newborn Church continued to keep its Passover in Jerusalem. But now the people of God saw the moment fulfilled in new signs: the bread and wine offered by Jesus as his body and blood. They observed the meal, as before, by telling the story of their salvation. But now the narrative, the Haggadah, reached its climax in the Gospel — as did each of the “Nights” in the poem.

Then came the binding of Isaac, which the early Christians unanimously saw as a foreshadowing of the crucifixion of Jesus. Both were “only sons” offered in sacrifice on the hill of Moriah; both carried the wood to the place of sacrifice; both were willing victims; and both were given back to their fathers.

Third came the deliverance from slavery. Throughout the New Testament, but especially in St. Matthew’s Gospel, Jesus is presented as the fulfillment of Moses’ prophecy: “The LORD your God will raise up for you a prophet like me from among you” (Deuteronomy 18:15).

Indeed, Jesus is greater than Moses (Hebrews 3:3). Both were pursued by a wicked king, and both went into hiding. Both left Egypt for the Promised Land. Both fasted for 40 days before giving the law. Both redeemed their people, Moses from slavery, Jesus from sin.

Finally came the night of the Messiah. Jesus fulfilled this as he instituted the Eucharist at the Last Supper, which was a Passover Seder meal. This would be his perpetual memorial (Luke 22:19), established “for the forgiveness of sins” (Matthew 26:28). At every Passover, the primitive Church presented the night of the Messiah as the culmination of all sacred history.

The ancient sources suggest that the Church’s first paschal liturgy developed directly from the common paschal Haggadah of the Jews.

The Jerusalem Easter Vigil is preserved in an Armenian translation from the first millennium, and in it we find “The Four Nights” unfolding pretty much as they did in the Targums.

In the paschal liturgy of St. Melito of Sardis, composed around A.D. 160, we also find the same sequence of events. Like St. Paul, St. Melito understands Jesus to be “our paschal lamb,” who “has been sacrificed” (1 Corinthians 5:7). 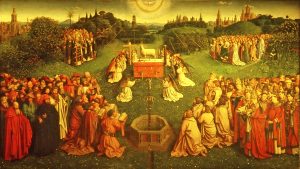 The development of the Easter Vigil has continued through the ages, and it underwent a great revival during the 20th century. But the core of it is the same now as it was in the early Church, the same today as it was in Jerusalem during Jesus’ boyhood.

In those days, the Jews kept Passover as one of the three “pilgrim feasts,” the holy days that all adult males were required by law to observe in Jerusalem. In the year A.D. 70, however, the temple was destroyed and the Jews dispersed into foreign lands. Afterward, in their exile, they still anticipated the restoration of all Israel, which would take place on the night of Passover. So they ended their observance (and still do) with the hope: “Next year in Jerusalem.”

Christians, however, believe that the gathering of the scattered has taken place in the Church of Jesus Christ.

So what are we to do this year, when we cannot gather for an Easter Vigil liturgy? What can Passover mean for us who are separated from our own holy city, which is embodied in the Eucharist?

It must mean what it has always meant. And we must keep the vigil as so many saints, throughout history, have kept it in times of stress, and danger, and persecution, and isolation, and banishment.

We must remember the marvels the Lord has done. We must never forget, for God’s arm has not been shortened since the dawn of creation. He seeks the redemption we desire, and the evidence is in the readings of the Easter Vigil, which we can read in our home (or watch on a screen).

The first three of those readings, in fact, are the first three “Nights” of God’s poem, and the Easter Vigil Mass itself is the fourth.

The Lord God has come to meet us again and again. Let us go to meet him, then, at the appointed hour.