In his long reign as Roman emperor, he unified lands and peoples stretching from Britain to Egypt. He eradicated piracy on the sea. He developed a system of roads and a postal service for worldwide communication. He inaugurated a period of relative peace in the world, and commerce thrived.

Yet, at age 70, Caesar saw that all his achievements were doomed. The reason was simple: Romans were not reproducing. They weren’t even marrying. Over decades of ease, they had come to enjoy a leisurely lifestyle, drifting from pleasure to pleasure without the encumbrance of children. Now, in the year we call A.D. 9, Caesar observed that there was not much that he could call a younger generation.

Rome was heading for demographic winter. So who, now, would man the armies? Who would run the institutions?

That year, a new law went into effect to promote marriage. It outlawed bachelorhood and spinsterhood, punishing both by fines and taxation. It criminalized adultery and homosexual acts, prescribing penalties as severe as flogging and death. Childbearing, on the other hand, was rewarded by state grants and subsidies.

Yet the law seemed doomed from the get-go. The nobles who could afford it paid the fines and went on living as they wished, even if they complained bitterly at every opportunity.

The historian Cassius Dio tells us of a strange and pathetic moment in the spring of that year, when Caesar attended a public gathering for ceremonies and games. The equestrians there made known their bitterness about the new taxes, so Caesar pulled a truly Solomonic stunt.

He asked the men to divide into two camps: the married on one side, and unmarried on the other. The scene, Dio tells us, was ridiculously lopsided, with the singles vastly outnumbering the marrieds. Caesar was “filled with grief” at the sight.

From his heart he delivered two speeches — and left us a kind of pagan “theology of the body.”

He began by praising the married men because, he said, “you have shown yourselves obedient and are helping to replenish the fatherland.” They were fulfilling a divine purpose.

“It was for this cause most of all that that first and greatest god, who fashioned us, divided the race of mortals in twain, making one half of it male and the other half female, and implanted in them love and compulsion to mutual intercourse, making their association fruitful, that by the young continually born he might in a way render even mortality immortal.”

He told the married men that they had “done right, therefore, to imitate the gods and right to emulate your fathers, so that, just as they begot you, you also may bring others into the world.”

But then Caesar turned toward the single men, and all he had for them was contempt.

“[W]hat shall I call you? Men? But you are not performing any of the offices of men. Citizens? But for all that you are doing, the city is perishing. Romans? But you are undertaking to blot out this name altogether. … For what seed of human beings would be left, if all the rest of mankind should do what you are doing?”

But it didn’t matter. No one listened.

Three generations later the historian Tacitus observed that — in spite of the penalties and incentives — “marriages and the rearing of children did not become more frequent, so powerful were the attractions of childlessness.”

The empire, for all its marvelous achievements, could not compel hope. Romans didn’t want children, and so they didn’t have them.

What they had instead was electively sterile sex. They used contraceptives. They practiced perversions. If they happened to conceive, they procured abortion. The Roman poet Juvenal observed that childbearing was an occupation for the lower classes. The rich relied instead on the skill of abortionists.

Failing to abort, a woman could commit infanticide — having the midwife drown the baby at birth or abandon it at the town dump. Most of the infants drowned or exposed were female, because girls were seen as a drag on the household economy. The practice of infanticide was common, and it was almost universal.

Almost. Jews, throughout antiquity, had set themselves apart in many ways, and one was their condemnation of infanticide. And in the ancestral land of the Jews, in the first century, there was a religious movement sprouting up in different parts of the empire that would come to be known as “Christianity.” 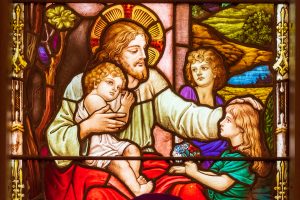 At the heart of Christian life was a Savior far different from Caesar. Caesar penalized celibacy, for example, while Jesus praised it. Caesar absolutized national and family bonds, while Jesus relativized them. In Christianity, all familial and social relationships were reordered, subordinate to the relationship with Jesus.

He said, ”If anyone comes to me and does not hate his own father and mother and wife and children and brothers and sisters … he cannot be my disciple.”

For Christians, the relationship with Christ was itself cast in familial terms, and it carried strong implications for family life.

“Husbands, love your wives, as Christ loved the church and gave himself up for her,” (Ephesians 5:25). That was a radical statement in the Roman world, where playwrights referred to females as “odious daughters,” and where women were not permitted to give testimony in courts of law — indeed, where female offspring were often drowned at birth.

Still more radical were Christian statements about children. The Roman upper classes did everything in their power to ward away the little ones. But Jesus said, “Let the children come to me, and do not hinder them; for to such belongs the kingdom of heaven” (Matthew 19:14).

Conversion to Christianity, from the Greek and Roman religious traditions, certainly involved a revaluation of children, women, and the marriage bond.

In Christianity, we see immediately a more welcoming attitude toward children. Clear condemnations — of contraception, abortion, and infanticide — are found in some of the earliest documents from the first century and continued from many Christian authors in different parts of the empire in the second and third centuries.

The second-century Letter to Diognetus puts the matter in positive terms. It speaks of the Christians’ “wonderful and striking way of life.” They were set apart, he said, by their refusal to commit infanticide or adultery.

If these were indeed peculiarly Christian characteristics, then it’s not a great leap for us to assume a higher level of satisfaction in Christian home life. If you eliminate infidelity and the murdering of children, you’ve removed two major stressors from a marriage.

Christian doctrine on family life appears to have worked. Sociologist Rodney Stark argues that the Christian population increased steadily during this period, in spite of persecution and other challenges. He concludes that the Church grew at a rate of 49% per decade over the course of its first 300 years — and that this growth is attributable, in part, to the Christian view of marriage.

Christianity held more appeal for women, because it respected their dignity and freedom; and so women made up an outsized share of converts. The outsized number of women, then, made Christianity more attractive to men who wanted marriage. Moreover, since Christianity emphasized mutual respect and service, Christians who married were probably much more likely to find themselves in a happy spousal relationship, which would itself, in many cases, lead to increased fecundity.

Outside the Church, however, the Roman population remained in free fall. As the second century turned to the third, the emperors were still alarmed by the population implosion, but still powerless to change the situation.

Among the Romans, patterns of vice had settled into custom, making individuals unhappy, families brittle, and society sick unto death.

The dignity of both had been recognized and revealed by Jesus Christ, and that dignity made an enormous difference. Plato had considered kids to be like animals, only worse because they were more intractable. Aristotle had taught that young people, like women and slaves, lacked sufficient reason to participate in society. Roman law treated minors as property, to be disposed of as their fathers wished.

Christian youth, however, were prized not for their usefulness or their physical beauty, but because they were people, created in God’s image and likeness. As such, they were children of God and not the property of men.

This had practical consequences. Children and adolescents were full members of the Church, and they could participate in Christian society in ways unimaginable in old Rome. An adolescent named Origen taught adults in the intellectual capital of the empire, Alexandria. St. Agnes exercised more influence in the Roman Church than even adult females could muster in sexist Roman society. 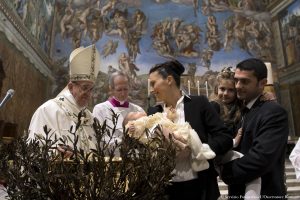 Pope Francis baptizes one of 28 babies in the Sistine Chapel at the Vatican Jan. 8. (CNS/L'Osservatore Romano)

Ordinary young people, even the poor, were welcome to participate in the central mysteries of the Christian faith. The Church encouraged parents to baptize their sons and daughters as babies, and some churches even admitted infants to holy Communion. Teens could choose to die heroically as martyrs, and many did.

There is a recent study that speaks of the Christian difference in the strongest terms. The book’s title sums it up: “When Children Became People: The Birth of Childhood in Early Christianity” (Fortress Press, $19). Another recent study tells us:

“We should not underestimate the advances in the lives of children which Christianity brought: the opportunity to share in life itself and the opportunity to be free of sexual violence. Nor can we omit the most significant spiritual reality: that children as children were seen to be valid partakers of the kingdom of heaven.”

Without the coercion of laws, Christianity achieved what the empire found perpetually elusive: population increase, with its attendant advances in economy and culture and happiness. Beginning with homes that welcomed children, Christians established societies more welcoming for children. Grace began its work of healing nature, building upon it, and perfecting it.