The life and lessons of St. Elizabeth Ann Seton, the first native-born American saint, are coming to video as part of a monthly series exploring her spiritual legacy.

The "Seeker to Saint" series, produced by the National Shrine of St. Elizabeth Ann Seton, is part of a yearlong commemoration of the 200th anniversary of her death. She died at age 46 Jan. 4, 1821.

Mother Seton "embodies what it is to be a wife, mother, friend, teacher, spiritual seeker and servant of the poor in ways that people can identify with today," said a news release announcing the series. "Everyday people see an ordinariness in how she lived and an extraordinariness in her response to these roles and the challenges she faced."

The first video in the series, "I Am a Mother," appears on the shrine's website at https://setonshrine.org/seeker-to-saint and its social media channels. Each video will be accompanied by a written story, which will be carried by Catholic News Service.

The first story, appearing June 2, is an interview with Luci Baines Johnson, the youngest daughter of President Lyndon Baines Johnson. She became a Catholic at age 18 and has a deep devotion to Mother Seton. As a wife, mother, businesswoman and philanthropist, Johnson said she feels her life's journey has been marked with connections to the saint.

"Mother Seton's life is filled with stories that people at all stages of their lives can relate to," said Rob Judge, executive director of the National Shrine of St. Elizabeth Ann Seton. "The videos bring these stories to life for a new generation seeking spiritual heroes and the healing power of love and service that she represents."

Raised Episcopalian in colonial New York City, Elizabeth Bayley married William Magee Seton, a wealthy shipping magnate. The couple had five children. William died in 1803 in Italy, where Elizabeth learned about Catholicism from the family who gave her hospitality. Wars had bankrupted the family’s shipping business.

After becoming a Catholic in New York in 1805, the now-poor Elizabeth was abandoned by old friends, but accepted the offer of a Baltimore priest to open a school for girls there.

After a year or so, she was invited to Emmitsburg, where in 1809 she founded the U.S. Sisters of Charity. She and members of her religious order began St. Joseph's Academy and Free School there in 1810. It was the first free Catholic school in America.

Her legacy includes several religious communities with thousands of sisters, who serve in schools, social service centers and hospitals throughout the world. Mother Seton is considered the patron saint of Catholic schools.

The shrine's yearlong celebration honoring Mother Seton began with a Mass celebrated by Archbishop William E. Lori of Baltimore. Emmitsburg is in the Baltimore Archdiocese. 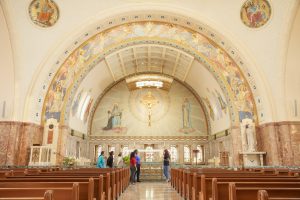 In July, the shrine will debut "The Seton Family Treasures," a special exhibit featuring rarely seen artifacts from the saint's life.

These include the iconic bonnet she wore, her writing table and a christening dress worn by her daughter. Many of these artifacts were donated to the national shrine earlier this year by the Sisters of Charity of New York, which traces its lineage to the order of sisters that Mother Seton founded.

Editor's Note: More information about the National Shrine of St. Elizabeth Ann Seton can be found at https://setonshrine.org.