Will pro-lifers change the future of feminism?

The art collection proclaims itself an “EMERGENCY exhibition” in response to the heavy abortion restrictions that 43 states passed last year, beginning with Alabama’s near-total ban passed in May 2019.

One piece, Tatyana Fazlalizadeh’s “To Be Without Choice,” features two sketches of African American women staring solemnly at the viewer. Next to them is a polaroid photo of a woman holding a baby in her lap.

Below the images are several lines of text from a 1989 brochure: “Somebody’s saying that we must have babies whether we choose to or not,” the text reads. “Doesn’t matter what we say, doesn’t matter how we feel. Meanwhile, those somebodies who claim they’re ‘pro-life’ aren’t moved to help the living.”

“Abortion is Normal” is not the only place voicing concerns about abortion restrictions. In a New York Times op-ed published on the 47th anniversary of Roe v. Wade, Ylonda Gault echoed the sentiment that limiting abortion means limiting women.

This year’s anniversary of the pivotal Supreme Court decision, Gault wrote, is “a call for deliberate action to safeguard the most basic and ordinary right of all: to control your own body.”

Arguments in favor of abortion range from denying the unborn child’s identity (“it’s just a clump of cells”) to justifying a necessary evil (“safe, legal, rare.”) Now, the mainstream argument preaches women’s empowerment, which must entail giving them total control over their bodies — and whatever resides in it.

While the crowd waved several signs that read “Save the baby humans” and “A person’s a person, no matter how small,” a host of women-focused messages permeated the streets: “I am a pro-life feminist.” “Pro-life, pro-health, pro-woman.”

At the front of the line, a group of young women, all students at Oakcrest School for girls, carried the March for Life banner to lead the way.

“Being pro-life is supporting women at all stages, no matter what the circumstances,” said Laura Cermak, an Oakcrest alum who attended the March.

Both the pro-choice and pro-life narratives profess to be adamantly “pro-woman,” but their vision for empowering women couldn’t be more different. Where’s the dividing line, and how did it get there?

As the March for Life crowd on Jan. 24 passed by the National Archives, which houses the U.S. Declaration of Independence and the Constitution, a large banner stating “Rightfully Hers” hung from the front of the building, in celebration of the 100th anniversary of the 19th Amendment, which granted women the right to vote.

Although the 19th Amendment passed in 1920, the suffragist movement had begun decades earlier, at the Seneca Falls Convention in 1848. This gathering focused on a range of women’s rights, and its Declaration of Sentiments summarizes several issues that still motivate the feminist movement today.

Besides the right to vote, the declaration included the assertion that men and women are equal, that women have a right to equal educational and professional opportunities, that men and women should be held to the same behavioral standards, and that women’s role in society should not be confined to the “circumscribed limits” of “corrupt customs.”

For the next 60 years, women would fight to assert their equal place in society through the suffragist movement, led by ardent leaders like Susan B. Anthony and Elizabeth Cady Stanton.

But among the rights that these women fought for, “reproductive rights” was not one of them.

Although modern-day abortion was a far-off phenomenon, abortion was not uncommon. Many original feminists saw the practice as a crime against women. Elizabeth Cady Stanton, who helped organize the Seneca Falls Convention, wrote, “When we consider that women are treated as property, it is degrading to women that we should treat our children as property to be disposed of as we see fit.”

Alice Paul, who drafted the original Equal Rights Amendment, called abortion “the ultimate exploitation of women.” And Victoria Woodhull, the first woman to run for president, declared, “Every woman knows that if she were free, she would never bear an unwished-for child, nor think of murdering one before its birth.”

So, what happened? Why is a nation so united in honoring the suffragists so divided on something they stood for? 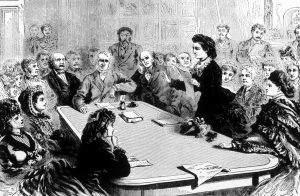 In her book “Who Stole Feminism? How Women Have Betrayed Women” (Simon & Schuster, $19.99), philosopher and scholar Christina Hoff Sommers outlined the evolution of the feminist movement, and how its modern ideology has taken many steps back from the Seneca Falls Convention. Sommers herself is pro-choice, but her evaluation still identifies the radical changes in feminist values that have made abortion one of its token crusades.

According to Sommers, the shift partly had to do with women getting a little too zealous about their collective resentment toward society, building a groupthink that touts female power over universal human dignity.

“The aims of the Seneca Falls activists were clearly stated, finite, and practicable,” wrote Sommers. “They would eventually be realized because they were grounded in principles  — recognized constitutional principles — that were squarely in the tradition of equity, fairness, and individual liberty.”

Over time, however, some women drew motivation precisely from their anger against society, and particularly against patriarchy.

“Most of those [people today] who publicly bemoan the plight of women in America are moved by more dubious passions and interests,” Sommers observed.

“Theirs is a feminism of resentment that rationalizes and fosters a wholesale rancor in women that has little to do with moral indignation.”

This “wholesale rancor” has fueled demands within the feminist movement that are not grounded in principles of equity, fairness, and individual liberty, but mainly with power. Gradually, many feminists held as their goal not so much to place women on equal footing with men, but to assert a position of control over what they saw as a misogynistic society.

As potent as modern feminism is today, it has not won over all feminists.

In 1972, a group of women decided to launch a “renaissance to the original American feminism” and founded Feminists for Life (FFL). Since then, the organization has provided support programs and educational resources for women experiencing crisis pregnancies, with the goal of “eliminating the root causes that drive women to abortion.”

At the March for Life, FFL Board Secretary Sharon Serratore described how the organization upholds true feminism. “The feminist principles of justice, of nondiscrimination, of nonviolence, are completely contrary to abortion,” she said. “Women deserve better, [but they] too often feel that they don’t have choices [and] have to resort to an abortion.”

The numbers tell the same story: About half of the women who get an abortion live below the federal poverty line. Already desperate, an unexpected pregnancy could further aggravate their lives and intensify the idea that abortion is necessary.

But like the suffragists, Feminists for Life believe that what really oppresses women is not abortion restrictions but abortion itself. A pro-abortion mindset, they argue, tells a woman that the only way for her to climb out of a crisis pregnancy is to reject her unborn child. In other words, there is no room for turning a crisis pregnancy into a normal pregnancy.

“To support women means to support not just choice but choices,” Serratore continued, “so that women can keep their babies while they work, while they’re in school.”

In an effort to help women discover that range of choices, Women’s Care Center, the largest national network of pregnancy support facilities, employs the same pro-woman, pro-life philosophy in its daily work.

“Our work is really woman-centered,” vice president Jenny Hunsberger said. Founded in 1984, Women’s Care Center’s goal is to accompany each woman throughout her pregnancy, giving her the resources and support she needs to have and care for her child. 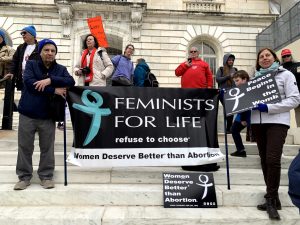 Members of Feminists for Life, including FFL Board Secretary Sharon Serratore (right), stand on the steps of the National Archives in Washington, D.C., during the 2020 March for Life. (Courtesy Sophia Martinson)

Admittedly, many women face very difficult situations that make the prospect of having a child overwhelming, if not terrifying. One client, Hunsberger noted, had been in an accident that led her to get her arm amputated. Soon after, she got pregnant.

In response, the Women’s Care Center team researched information about caring for a child with one arm. But even more importantly, said Hunsberger, the client’s counselor affirmed her courage against all odds.

“Our counseling model is strengths-based,” said Hunsberger. “Each woman, no matter how challenging her situation is, is gifted with deep and abiding strengths. … Our work focuses on uncovering those incredible gifts and letting her see them.”

Rather than sending the message that pregnant women “must have babies whether we choose to or not,” Women’s Care Center prioritizes empowering women to feel truly free and build a thriving future for themselves and their families. That approach has attracted nearly 30,000 women annually to its 32 sites. Last year, 16,246 babies were born to Women’s Care Center clients.

Liberty, justice for all (moms)

The day after the March for Life, Charlotte Pence, daughter of Vice President Mike Pence, gave a keynote address at the Pro-Life Summit in Washington, D.C. In it, she reminded her audience that women are stronger than abortion advocates make them out to be.

“The pro-choice argument ultimately tells a woman that if she’s met with an unforeseen circumstance, an unplanned pregnancy … she can’t rise above those unforeseen circumstances,” said Pence. “She can’t have the best life that she wants if she chooses to keep this child. And that’s a lie. And it’s a message of defeat. Our message, the pro-life message of a post-Roe America, has to be one of victory.”

The pro-life movement is often criticized for valuing the life of an unborn child over the life of a struggling woman. But as this growing movement stresses, being pro-life must be pro-woman.

Despite the fact that abortion is still prevalent in our society, Hunsberger sees the tides turning.

“There is so much more to be hopeful about than there is to be discouraged about,” she said. “Life is winning.”