On a recent Sunday drive home after Mass, my husband selected Johnny Cash’s album, “My Mother’s Hymn Book,” for our listening. Although I am familiar with Cash’s chart-topping hits and albums, I had never heard this one, released a few months after his death.

Tracks include “I’ll Fly Away,” “If We Never Meet Again This Side of Heaven,” and “In the Garden,” among other Gospel standards.

The stripped-down album features Cash, alone with his guitar, performing hymns that his mother taught him as a child. While Cash’s paternal grandfather was a preacher, biographers attest that it was his mother, Carrie Cloveree, who passed on the faith to Johnny and his six siblings.

She even managed to convince her son to record himself reading the entire New Testament. (It’s about 19 hours, if you have the time. I got chills listening to his recitation of the prologue to St. John’s Gospel).

It was his mother, along with June Carter, who greeted Johnny as he emerged from the Nickajack Cave in Tennessee where he had intended to take his life, a result of the havoc his drug addiction wreaked on his well-being, relationships, and career. 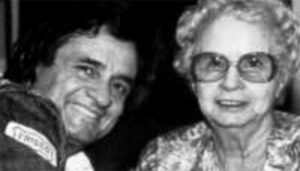 Like several religious figures and philosophers, he’d had an epiphany inside of a cave. “I thought I’d left him, but he hadn’t left me,” he realized.

Cash’s Christian commitments, marked by years of sin and sorrow as well as grace and redemption, are well-documented in his music.

What I find most compelling about his final album is the sweetness and simplicity of a man singing hymns once sung to him by his mother, and his choice to release them as he approached his death.

My own grandfather called out for his mother shortly before he passed away. It’s an image that has always stayed with me: a grown man, nearing his end, seeking the security of his mother’s arms.

I’m nine months into mothering a son; our relationship has only just begun. “My Mother’s Hymn Book” has me contemplating what role I might play in shaping his character, aiding in his self-discovery, and providing that sure support he needs in moments of vulnerability and weakness.

In other words, I have been wondering how I can help him become a good man, and God willing, a saint.

While I was pregnant, my aunt offered me some advice toward this end: “If it’s a boy, don’t clip his wings.”

As someone who is naturally risk-averse and clings to control, even if illusory, I initially dismissed her comment. But I’ve come to see the wisdom in her adage about letting boys fly. The proof is in the pudding: her sons’ stable, fruitful lives are testaments to the efficacy of her approach.

Boys and men are hardwired to seek, search, and — often against the odds — survive. I see these traits appearing in my little one already. 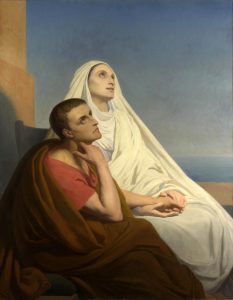 During the month of August, the Church gives us another mother-son duo to contemplate: St. Monica and St. Augustine, the latter who makes Johnny Cash’s worst days look mild. St. Monica is known for her prayerful and tearful supplication on St. Augustine’s behalf as he searched in all the wrong places for God.

“How intensely she loved me: with far more anxious solicitude did she give birth to me in the spirit than … in the flesh,” St. Augustine writes of his mother in “Confessions.”

In what must have been the most sweet reward for a persevering mother, St. Monica shared a mystical vision with St. Augustine near the end of her life, a foretaste of what they would share in heaven.

Raising strong and saintly boys is a challenging task for today’s Christian mothers. St. Pope John Paul II wrote that the best societies are those which make it easier for citizens to be good. We don’t live in such a society.

The path to mature manhood is no less difficult, with mixed messages being broadcast about the nature of masculinity and what makes for virtue or vice.

Letting boys fly — trusting that they learned enough in the nest to find their way — takes a lot of grace and grit. Cloveree and St. Monica are two good guides for those of us working this out.

In the final track from “My Mother’s Hymn Book,” “Just As I Am,” Cash humbly croons:

“Just as I am, Thou wilt receive,

Because Thy promise I believe,

It was St. Augustine, in an exposition on Psalm 72, who wrote the now oft-quoted line, “He who sings, prays twice.”

What more could a mother ask for than for her son to sing — nay, pray — such words?

As for me and my son, we’ll start with Mass, Sunday drives, and Johnny Cash albums. Grace can build on what comes after.