My racism epiphany on K Street

My mother and father are first-generation Americans. Both sides of my family came to the United States from Mexico. I was born in Los Angeles, grew up in Phoenix, and have lived in California most of my adult life. This means that I’ve spent a large part of my life in places where the dominant culture is Hispanic.

I grew up surrounded by a large extended family: my mother’s maiden name is Garcia, so I like to joke that I am related to about half of the people who live in the Southwest.

Still, I grew up listening to stories of how my parents and grandparents were discriminated against during World War II. I myself was called a “wetback” to my face growing up, but didn’t think much of it, perhaps thanks to the strong support system of family, friends, and a familiar culture that I enjoyed.

If someone made the mistake of judging me by the color of my skin, I shrugged my shoulders and considered that to be their problem, not mine.

In other words, racism was never all that relevant to my life. At least that is what I believed until I moved to Washington, D.C., to attend law school. 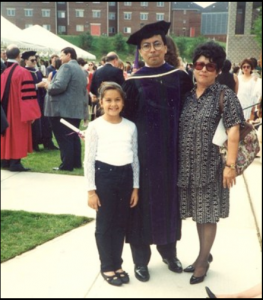 Rivas with his aunt Isabelle and cousin Monica at his graduation from the Columbus School of Law in Washington, D.C., in 1995. (Courtesy Andrew Rivas)

Soon after I arrived and started living on Capitol Hill, I found myself in need of a new pair of eyeglasses. I ventured down to K Street — a fairly affluent business district with lots of shops, restaurants, and some of the most powerful law firms on the planet — to see what I could find.

When I walked into the eyeglass store, the first thing I noticed was a woman behind a glass counter talking to a gentleman who was looking down into the counter between them.

The lady excused herself and immediately walked over to me asking, “Can I help you?”

“Thank you, yes,” I replied, happy with what I perceived to be quick customer service. “I am looking for a new pair of glasses, but I’m not sure what I want.”

She walked me over to a wall covered with different styles of eyeglasses and started to describe them. It was at that point that a tall black man, probably in his late 20s or early 30s, dressed professionally in a nice suit, walked inside.

“Excuse me,” the lady said to me, and then she walked right over to the gentleman.

I didn’t think anything of the fact that she left me on my own. I simply continued to look at the array of glasses in front of me.

As the clerk approached the black man I heard her say, “Can I help you?”

“No,” he answered politely. “I’m not sure what I’m looking for. I just want to look around.”

“Of course,” she replied, and then she followed him closely as he walked around the shop.

I could tell that the young man was uncomfortable with being shadowed. At one point I heard him say, “I really don’t need any help.”

The clerk again replied, “Of course,” but remained just a few feet away from him wherever he walked.

It didn’t take long for the young black man to become irate, finally saying loudly, “Oh hell, I don’t need this s**t!” before storming out of the store, slamming the door behind him.

I remember initially thinking the young man had been rude. The clerk then came back to where I was standing and smiled, saying, “If you don’t watch them, they will rob you blind.”

As long as I live, I will never forget my reaction to what she said.

“I must have heard that wrong!” I thought. I couldn’t believe that any adult could actually utter such a racist statement, and with a smile no less. Did she really believe that because he was black, he would steal from her? For all she knew, the well-dressed man could have been a lawyer in one of those K Street firms, perhaps even one working to stop criminal behavior.

“So are there any styles you like?” she asked me.

I was totally confused as to what to do at that moment. Was I supposed to simply ignore what she had just said to me? How was she able to casually say something so racist and then ask me what eyeglass style I liked?

That was when it hit me: I realized that the gentleman who was in the shop before me, the one still standing by the glass counter, was white, as was the clerk.

It dawned on me that she had walked back to me, the Mexican, and stayed with me as I shopped. If she believed black people will “rob you blind,” did she think brown people would also steal from her?

Looking back, I wish I could say I responded with Christian grace and an informed moral conscience, pointing out to her that it was wrong of her to treat him in such a way because of his skin color.

Sadly, I froze, and after babbling a bit, I murmured, “No thank you,” and walked out of the store.

I remember feeling incredibly alone in that moment. No matter where I looked, there was no sign of the support system like I had out west. Nothing and no one was familiar: not a single “panaderia” (“bakery”) to comfort me with a delicious smell of “pan dulce” (“sweet bread”), not my mom, dad, or extended family.

I also felt incredibly ashamed. All of my life I had ignored any racism directed toward me because I had the comfort of a strong support system. But how many times did my carefree attitude cause me to ignore the racism around me directed at others?

My initial response to the young black man storming out of the store was to assume he was the one being rude. Even after the clerk’s incredible comment, I wanted to believe that I had misheard what she said.

How many times had I seen someone cross the street in order to avoid a black man or politely laugh when a friend told an off-color joke about Asians? Or how many times did I fail to push back when a family member said they didn’t want to go to that parish’s “wetback Mass?” Yes, Hispanics say stuff like that, too.

That day in the eyeglass store was an epiphany. The shame that grew inside of me also helped me realize that I couldn’t just shrug my shoulders any longer.

There are people in the world who actually judge others because of the color of their skin and treat them poorly because of it. That treatment is alienating, and causes individuals and entire communities to live in fear and anger. One need only turn on the television or open their web browser to see images of this tearing our country apart.

I wish I could offer clear-cut answers as to how to eradicate racism, but I can’t. Instead, I humbly offer my story, so those individuals who, like me, never thought racism was relevant can start to take notice of the pain and suffering it inflicts.

Hopefully, more people will understand that far too many of us are focused on what makes us different, rather than embracing how much we all have in common.

Let’s also pray that they happen for people like the clerk on K Street. Her days were spent helping people improve their vision: Hopefully, in time, she will see more clearly, too.

Andrew Rivas is the executive secretary of the California Catholic Conference.