My last pilgrimage with my mother

I think it was the picture of the crutches stacked against the wall that made her want to make the pilgrimage. It was May of 2018, and my mom asked me out of the blue to drive her to the Oratory of St. Joseph in Montreal, Canada. She was a year and three months into a terminal diagnosis of ALS and was beginning to lose the use of her legs. Doctors estimated that she had about two or three years left to live.

My brother, father, and I were busy with practical tasks to stay ahead of her successive needs, like customizing a power wheelchair, researching how to thicken liquids, and getting the advanced health care directive in order.

My mom didn’t want to talk much about those things. She vacillated between fear, anger, and a firm resolve not to focus on tomorrow’s troubles when today’s were sufficient.

She was also intent on getting a miracle.

My mom was convinced, until the end, that God could heal her. “When I get my legs back,” she would begin a sentence, detailing the hopes she had for her future.

My father had already accompanied her to Lourdes and Fátima. She returned in the same state as when she went. Later, she and I flew down to Arlington, Virginia, to a women’s conference so that she could meet Sister Briege McKenna, an Irish religious sister with the gift of healing. She left that event without a cure.

And then she asked me to make the 10-hour drive to Canada from New Jersey. I was starting to worry about her faith turning into desperation, but I didn’t have the heart to put the brakes on the idea. Plus, the clock was running out for future mother-daughter trips.

My mom had been reading about St. André Bessette, the Quebecois porter of Notre Dame College in Montreal. A religious brother of the Congregation of the Holy Cross, St. Bessette was assigned to the role of doorkeeper due to his poor health and lack of education. Yet his was not a hidden life. Many visitors who prayed with him received physical healings, and word spread quickly. People came in droves to meet with him. 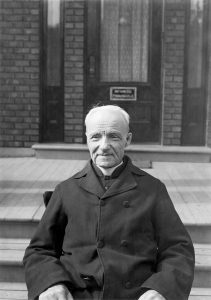 Brother Bessette attributed the healings to the intercession of St. Joseph, not to himself. In the interest of increasing devotion to the foster father of Jesus, he saved up money to build a small shrine dedicated to him.

When the oratory opened in 1904, he was assigned to be its full-time caretaker. There he received thousands of pilgrims, many of whom received physical healings. A larger basilica was completed after Brother Bessette died. It is the largest shrine to St. Joseph in the world, and it attracts more than 2 million pilgrims a year. Both the smaller shrine and the basilica are laden with crutches that pilgrims have left behind after praying at the site.

A general rule with religious pilgrimages is that anything that can go wrong does go wrong. I had a sense that even though we were driving north, things were headed south only an hour into the drive at the Vince Lombardi rest stop on the New Jersey Turnpike.

I accompanied my mother into the restroom using her walker, only to find the handicapped bathroom occupied by an able-bodied woman. Once we got into the stall, I received my first introduction to the world of ADA compliance. It turns out when it comes to disabilities, the one-size-fits-all approach doesn’t actually fit all needs.

Our Airbnb advertised accessibility as well, but the beds were too close to the ground for my mom to get in and out of, and the walls reeked of smoke. The weekend we chose happened to coincide with a Grand Prix race, so the city streets were blocked by sportscars and filled with tourists, making already treacherous navigation more difficult.

This is to say nothing of the most disappointing part of the trip: When we got to the tomb of St. André, we found it closed to visitors for renovation. When I saw the blockade, I began to cry.

My hands were sore from pushing my mother along city streets and up the steep incline to the basilica. But most of all, my heart ached for her. We had come all of this way — the physical and emotional distance — to meet the porter who couldn’t open this one door for us.

I didn’t have the heart to look at her face, so I wheeled her a few steps over to the eight altars dedicated to St. Joseph. There the saint appears in relief, lit up by an intense red hue emanating from the votive candles. There are eight altars, each dedicated to a group of people of cause for which the saint’s intercession is sought, including Joseph, Guardian of the Pure in Heart; Joseph, Protector of the Church; Joseph, Mainstay of Families; Joseph, Terror of Demons; and Joseph, Model of Laborers.

Then we stopped by the three others and were overcome: Joseph, Hope of the Sick; Joseph, Our Solace in Suffering; and Joseph, Patron Saint of the Dying. It seemed that St. André was doing what he had always done — pointing pilgrims away from himself and toward St. Joseph.

We stood there at the last altar praying together:

Open our eyes that we may glimpse the road to Life that lies beyond death. / May nothing, not denial, anger, nor depression, separate us from the Love of God./ Strengthen our faith in God who always finds ways of preserving us in his friendship. / Be beside us to hold our hands when we take our first steps toward the Eternal Kingdom.

Three years later, my father, brother, and I were praying at my mother’s bedside as she received the anointing of the sick. She died a few hours later. I spent a long time asking God why my mother wasn’t among the pilgrims who left the waters of Lourdes able to walk, or who left her wheelchair behind at the oratory.

But I can now imagine that as she passed from this life to the next, she walked through the gates of heaven on those legs she wanted back, greeted by St. André at the door. And the ever glorious patron of a happy death would be close behind, welcoming her home to rest at the end of her earthly pilgrimage.