Where to find 'strength for the fight' of this year's Lent

At the National Prayer Breakfast in Washington, D.C., earlier this month, Arthur Brooks, the former president of the American Enterprise Institute, talked about loving your enemy.

But the way the next speaker reacted, you would have thought it simply a provocative new idea Brooks decided to test-drive to get a rise out of someone in the chattering class.

That speaker was the president of the United States. At various points during Brooks’ speech about the “culture of contempt” in America and the need to combat it with love, you didn’t have to be a body-language expert to see the president was not in agreement.

Now, this just happened to be the morning after President Trump’s impeachment acquittal in the Senate, so the president probably was particularly not in the mood for loving his enemy. In fact, he had walked into the annual event holding up newspapers reporting his acquittal as if they were trophies.

When Donald Trump got up to the podium, he confirmed most of our suspicions when he said he did not agree with the case Brooks made. Of course, Brooks was just applying the Gospel to our current political culture, a culture that has infected relationships on a seemingly epidemic level.

Aside from anything having to do with politics, it was a fitting and telling exercise. Isn’t this our problem? We get distracted by every single other thing in the world. Our busyness, our annoyances, our failures, our planning, our finances, our expectations are all materialistic, worldly ones that tend to strangle us in their seemingly necessity. But what do these have to do with the purpose of our lives?

Just after the Prayer Breakfast happened, I got on a plane to North Carolina to see up-close the Catholic ministry Hard as Nails in action in a parish, in fact, in a church that is known as America’s largest Catholic parish, St. Matthew in Charlotte, North Carolina.

The mission of Hard as Nails Ministries is to see to it that no one suffers alone. And you saw that play out during this parish mission, as people really came to desire to give their suffering to God and to not linger in the wounds of the past, but use rejection as rocket fuel to move forward, deeper into the life of the Trinity, the life God made us for. 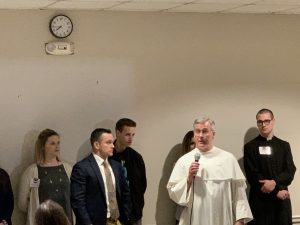 Lent couldn’t come sooner this year. Perhaps that’s the case every year, but this year the convergence of the National Prayer Breakfast in Washington and the president’s impeachment acquittal in the Senate seemed to shine a spotlight on the distraction from love seemingly everywhere. Even when we call things love, is that really it? Does it resemble Jesus on the cross?

A Lent that doesn’t include a refocusing on Jesus on the cross is no kind of Lent at all. Don’t wait until Good Friday to awkwardly kiss a cross at a dutiful service. Work up to a real experience of the Passion.

The folks at Hard as Nails, founder Justin Fatica and director of formation Father Peter John Cameron, OP, have developed a great model for small groups to really work through struggles, focus on gratitude, and really pray with Scripture. When we start to unite our struggles more intimately with the passion of Christ, our life starts to look different.

Going through lectio divina with the Canaanite woman who begs Jesus for help in the 15th chapter of Matthew, Father Cameron pointed out a few things that restore hope and an ability to be in the fight, the struggle of our lives for union with God.

One of his suggestions: Simply praying, “Lord, give me the strength that I need to get in the fight.” I know I sometimes feel like I am on the bench, unable to get up.

Another: “Jesus wants us to be face-to-face with him. His face was made to receive the begging.” I sometimes find myself doing this, looking at his agonized and yet loving face on a crucifix. For love of me. Unworthy me. That’s unbelievable but for the gift of faith.

My prayer is that by some miracle it increases this Lent. But it’s only going to increase if we ask Jesus to make it so. He is the instrument of our transformation. Give him time. We must pour out our hearts to him, hold nothing back from him.

Scandal in the Church is reality and the only way out is a rededication to love of him, for his people. That means not overlooking a single person, however we may feel about them. Seek the face of God in each person we meet. This has to be the goal. This is our mission. 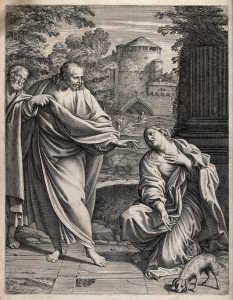 One of the aims of Hard as Nails is that no one suffers alone. But do we even consider there is suffering in the person ringing up our lunch, never mind that person we’ve come to an impasse with?

About loving your enemies, Pope Francis said last February: “Jesus’ words are clear: ‘I say to you that hear, love your enemies, do good to those who hate you, bless those who curse you, pray for those who abuse you.’ ”

He added: “It’s not optional; it’s a command.

“We become capable of things that we never thought we could say or do, and that, rather, we would be ashamed of, but that now, instead, give us joy and peace,” Pope Francis said. “We no longer have a need to be violent, with words and gestures; we discover ourselves capable of tenderness and goodness, and we feel that all this doesn’t come from us but from him!”

Our language tends to be so violent, this is so prevalent. As it would be if we had contempt for one another. How are we going to make a change this Lent? How are we not only going to love our enemies but inundate the world with the love of Jesus? Lent isn’t about giving up chocolate and meat on Fridays, though sacrifice is at the heart of it. So is love.

When Pope Francis came to the U.S. in 2015, the theme was “Love is Our Mission.” Let’s start living it this Lent in radical ways. That’s how we rebuild the Church, all of us.