Lay volunteer nurses to be beatified as martyrs in Spain

Three Red Cross nurses are to be beatified as martyrs in Spain, 85 years after they were raped and shot while caring for wounded Civil War soldiers, having refused to renounce their Catholic faith.

“These martyrs were not linked to either side — the Red Cross went wherever it was summoned, regardless of who was in control,” said Bishop Jesús Fernández González of Astorga. “Nor did they carry weapons, or use even words to attack anyone. They were simply moved by human compassion and Christian charity, knowing the risks and dangers when signing up as volunteers.”

His message was published ahead of the May 29 beatification of María Pilar Gullón Yturriaga, Octavia Iglesias Blanco and Olga Pérez-Monteserín Núñez at Astorga’s Santa Maria cathedral. Cardinal Marcello Semeraro, prefect of the Vatican Congregation for Saints’ Causes, will celebrate the beatification Mass. 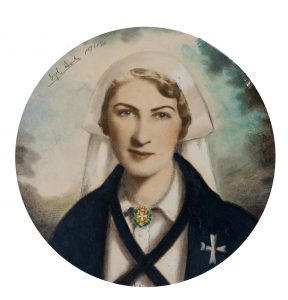 María Pilar Gullón Yturriaga, a Red Cross nurse who was raped and killed in 1936 in Spain, will be beatified May 29 in Astorga, Spain, along with two other nurses who were murdered. The nurses, who were killed during Spain's Civil War, refused to renounce their Catholic faith and shouted "Viva Cristo Rey" ("Long live Christ the King,") when they were stripped and shot. (CNS photo/courtesy Diocese of Astorga)

Bishops Fernández González said the three women had clung to their crosses and forgiven their executioners, offering a “model of the Christian lay vocation.”

“Although they were given the opportunity to apostatize, they did not do so,” Bishop Fernández González said. “They were people with their whole lives ahead — only a great hope could have enabled them to renounce it, and only a great love could have sustained such hope.”

“The testimony of martyrs offers a lifeline, keeping us afloat in the truth that liberates,” he said.

Gullón Yturriaga, the child of a prominent lawyer-politician originally from Astorga, moved back to the town with her mother in July 1936, after her father’s death, believing it would be safe from the worsening conflict.

Her Astorga-born cousin, Iglesias Blanco, came from a local family that had helped endow the town’s Redemptorist convent and belonged to Catholic Action while serving as a catechist and charity worker.

Pérez-Monteserín Núñez was born in Paris, the daughter of a Spanish painter, and pursued interests in art after the family returned to Astorga in 1920. 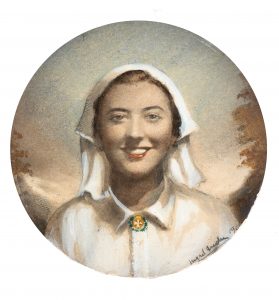 Olga Pérez-Monteserín Núñez, a Red Cross nurse who was raped and killed in 1936 in Spain, will be beatified May 29 in Astorga, Spain, along with two other nurses who were murdered. The nurses, who were killed during Spain's Civil War, refused to renounce their Catholic faith and shouted "Viva Cristo Rey" ("Long live Christ the King,") when they were stripped and shot. (CNS photo/courtesy Diocese of Astorga)

All three answered an appeal for Red Cross auxiliaries in summer 1936, working at Puerto de Somiedo hospital in Gijon, which was held by Gen. Francisco Franco’s National Army.

On Oct. 27, 1936, the area was captured by Republican forces, who stormed the hospital, killed the chaplain, wounded soldiers and arrested the nurses with 70 others.

Witnesses said the three women, mistaken for Catholic nuns, were tortured and raped overnight, with a car engine revving to drown their screams, and shouted “Viva Cristo Rey” (“Long live Christ the King”), when they were stripped and shot Oct. 28.

A commentary on the Astorga diocesan website said the International Red Cross had protested the nurses’ killing and pressed the Spanish government for justice, as well as assisting their exhumation from a mass grave and reinterment at Astorga cathedral in 1948.

“The life and martyrdom of these three laywomen, health care workers in hard times of conflict, provide a valid reference point for Christian life today,” the commentary added, “in a world where women continue to be denigrated and Christians persecuted for their faith, and in which ordinary people, seeing their health threatened by a pandemic, especially value the work of health professionals and volunteers.”

Almost 2,000 Catholics from the 1936-1939 Spanish Civil War have been beatified or canonized as martyrs. During the war, 12% of the nation’s clergy were killed after an anti-clerical Popular Front government sanctioned a campaign to desecrate and destroy church properties.