Would you like a cinnamon roll? Hot chocolate? A prayer? Sister Mary Gabriel and Sister Mercy Marie were going straight for the traffic as it approaches Rockefeller Center on a recent Wednesday night.

Cab drivers. Uber drivers. Messengers. Passersby. You name them. No one was off limits. A few people clearly had no interest in finding out what was going on.

But they were few and far between. The overwhelming majority seemed more than happy, both surprised and yet not at all, that women in habits were offering them baked goods, warmth, and the Holy Spirit.

And it wasn’t just two of the Sisters of Life bearing gifts. The pastries and cocoa were donated, and they had enough to feed or warm 1,000. That’s the kind of hospitality New Yorkers aren’t known for, and yet, here were some of our finest, the ones who will help us be who God made us to be.

St. Patrick’s Cathedral on Fifth Avenue in Manhattan, you see, has no real meeting space. So, when it came time for some treats after the Mass celebrating the centenary of the late Archbishop of New York Cardinal John O’Connor’s birth, Fifth Avenue was the obvious place to be.

Mercifully, the Christmas tree had just come down, or everything would have been gone in a minute or two, the way those tree crowds operate!

As the sisters flooded the street, some people would ask, “What exactly is going on here?” Others didn’t seem surprised at all. New York has just about everything else. Why not nuns? But as I looked around at the sisters having conversations, God was at work through them.

“What are the Sisters of Life?” You could see things happening in one woman who asked, and as men asked for prayers. “This is what I live for!,” I heard one sister exclaim. Sharing his love is what she was talking about.

The conversation can get especially deep quickly, because these women religious take a fourth vow in addition to poverty, chastity, and obedience, speaking to their unique charism for protecting human life. 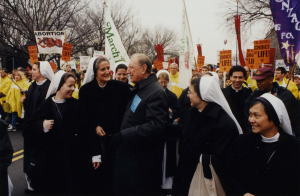 The Sisters of Life were founded by Cardinal O’Connor after a 1975 experience at the Dachau concentration camp that left him crying from the depths of his heart: “My God! How can human beings do this to other human beings?”

Evil, of course, is the answer. The evil that wreaks havoc on the human heart and soul. The evil that hurts and scars and bruises. The pain that hardens and sometimes is simply waiting for one person to look into another’s eyes with a look of love, a look that these sisters give naturally.

I often find myself with the Sisters of Life, but it’s gotten a little out of control lately. Even when I don’t plan to be with them, I am, which is always a blessing. A recent trip to an off-the-beaten path parish for Sunday Mass for the purpose of invading its perpetual adoration chapel became another occasion for a run-in with the sisters.

At the end of the Mass, Sister Ann Catherine talked about how God chose you, to love you into existence, and he loves you regardless of how much money you make and how useful you are. He loves you, all of you. He wants you to come to him with your sins and your wounds. He wants to unite them with his glorified wounds. He wants to heal you so that you can love in the way he loves you: boundlessly, gratuitously, full of mercy.

Their message is truly about a culture of life, and civilization of love in full. It’s not just about defeating abortion, it is about restoring the human heart. It’s about giving hope to the soul. It’s about living love, and showing what that looks like in all kinds of circumstances.

The night before the centenary Mass and celebration, I was also with the Sisters of Life, praying holy hour and evening prayer and maybe lingering a little after at their Holy Respite convent, where pregnant mothers and mothers with their babies live with them.

The Sisters of Life themselves, but this building in a particular way, too, is a beacon of what was the vision of Cardinal O’Connor: to be able to say to women, if you are pregnant and need help, come to the Catholic Church. So, he put a “help wanted sign,” so to speak, in his Catholic New York column, announcing the Sisters of Life, and women came.

One of those women was Mother Agnes Mary Donovan, who essentially founded the order with him. During a reflection after that centenary Mass, she recalled how he was both lion-hearted and tender, a father and a truth-teller. He was a leader. And more than dozens of people remarked to me during the 100th birthday celebrations how very much they wish he were alive today (not quite 100, but in his prime again).

He engaged politically, fearlessly, and he cared for those other people argued about, his time with AIDs patients, most beautifully. 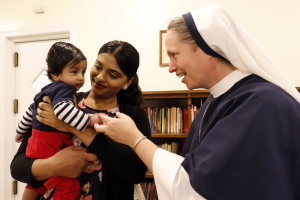 Rohini Brijlall holds her 3-month-old son Zakarya as Sister Mary Elizabeth, vicar general of the Sisters of Life, talks with the child at the religious community's Holy Respite residence in the Hell's Kitchen neighborhood of New York City. Holy Respite serves as a home and support center for pregnant women in crisis and new mothers. (Catholic News Service/Gregory A. Shemitz)

But back in the chapel of the Holy Respite convent, listening to cooing and crying at the same time from different babies, I couldn’t help but be haunted by the question: What are we doing? Well, the Sisters of Life are doing their part, literally laying down their lives to save lives, to show Jesus and let him be known. And I give thanks every time I run into them for this legacy of Cardinal O’Connor with the Sisters of Life.

This Jan. 22 marked the 47th anniversary of Roe v. Wade. That necessitates an examination of conscience. It’s been legal for all of my life. What am I doing to make sure it doesn’t outlive me? These sentences here don’t get me off the hook.

Where are our weekly holy hours in reparation? Are we sharing the reality of God’s mercy with women in our churches who need to ask Jesus to forgive them? (It’s not just women on Fifth Avenue; women who have had abortions are at Mass on Sunday, they are Church volunteers. The shame eats at them. It doesn’t have to.)

Do they know there is post-abortion healing to be had, and that the people who run these ministries are not going to judge them, but they are going to cheer them on into the arms of the Divine Physician?

Abortion is a grave reality in our midst. Let’s undo it with love. Don’t let January end without adding something to your life that will help change the hearts of men and women who may just be in a quiet, tortuous misery over the pain of abortion. Let’s make that be no more.