When Europe met Mexico, the consequences for the Mexicans were devastating in many ways. By far the most devastating consequence was something no one could have predicted: Mexicans had no immunity to many European diseases.

Smallpox was a nuisance to Europeans. It killed a certain small percentage of them, but most survived because their ancestors had been among the survivors of the first smallpox epidemics. Mexicans had never been exposed to the disease, and whole civilizations could be practically wiped out by it.

Diseases were nobody’s fault. No one in the world had the knowledge in those days to prevent them from spreading through vulnerable populations. But we can certainly blame some of the Europeans for their greed and cruelty. It may not have been most of them, but it was enough of them to inflict entirely preventable catastrophes on the Mexican population.

Meanwhile, the missionaries were doing their best to convert their Mexican neighbors. But why would the Mexicans want to accept the religion of the people who treated them so badly?

A number of them did accept it. They saw the difference between the friars, who devoted their lives to the welfare of the Mexicans, and the conquerors, who saw them as slaves to be exploited.

But still, it was an uphill battle for the friars. Unless something changed, it would be hard to imagine Christianizing the vast population of New Spain.

Doubtless they asked Mary for help. And she was about to come through for them. 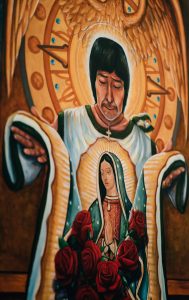 Painting by artist Rick Ortega as part of the exhibit. (Archdiocese of Los Angeles)

Every Mexican knows the story by heart. There was a man named Juan Diego — that was the name he had taken at baptism — who had been born before the Spanish arrived in Mexico, and had become a faithful convert to the Catholic faith. He used to walk over to the mission frequently for Mass and religious instruction. He was middle-aged and poor.

One day as he walked to the mission he heard heavenly music coming from the top of a hill. When he looked toward the sound, the music stopped, and a voice called his name. He walked up the hill and found a beautiful lady surrounded by light.

She was the mother of God, she said, and she had a simple request for him to take to the bishop: She would like him to build her a chapel where the people of Mexico could pray for her help.

Juan Diego delivered the message to the bishop, who told him to come back some other time. Faithful Juan Diego reappeared the next day right after Mass. This time the bishop told him to ask Our Lady for a sign.

So Juan Diego went back and asked Mary for a sign, and she told him to come back for it the next morning. But when Juan Diego got home, he found his uncle very sick. He sat at his bedside while the uncle got worse, and missed his appointment with the lady on the hill.

Juan Diego did all he could, but after two days it was clear that his uncle was dying. There was nothing left to do but go for a priest to hear his last confession.

He was ashamed for missing his meeting with the lady, so he went by a different route. She found him anyway. Juan Diego stammered out the story of his uncle, but the lady was not cross with him. She simply asked why he hadn’t asked for her help. “I’m your mother. Wasn’t I here for you?”

His uncle was doing much better, she said, and he should stop worrying about him. (And, in fact, when Juan Diego got home later, he found his uncle completely recovered.) As for the thing the bishop asked for, he should go up the hill to the place where they had met and collect flowers.

This seemed unreasonable; it was December. But Juan Diego did as he was told, and at the top of the hill, he found the meeting spot covered with roses and other flowers. He started picking them, and in a short time had far more than he could carry.

So he took off his tilma.

A tilma, or “tilmatli” in the Nahuatl language that Juan Diego spoke, is a simple burlap cloak, like a poncho. Juan Diego had too many flowers to carry in his hands, so he wrapped them up in his tilma.

Then he walked to the bishop’s residence, and after waiting to see the important man he finally was able to bring in the large bouquet. This, he told the bishop, was the sign Our Lady had given him, and he emptied his tilma.

And the bishop fell on his knees.

When the flowers fell out of the tilma, they had left behind a perfect image of the beautiful lady Juan Diego had met.

Almost immediately the story spread, and people started coming to see the tilma. The bishop built that chapel the lady had requested, and Juan Diego’s tilma was enshrined in it.

People might come to see it out of curiosity, but many of them left as Christians. Every detail of the image was perfectly imagined to appeal to the Mexican people. They could see the truth of Christianity written in it. The lady was dressed as royalty, but she was meekly bowing in prayer.

There had been nothing meek about Aztec royalty, but this lady was powerful and important, and yet humble. She had divine attributes — she wore the heavens like a garment — but instead of looking stern or horrible like an Aztec divinity, she looked kind and loving. And she was inviting the people of Mexico to come to her for protection.

This was the message the missionary friars could not get across by themselves, no matter how hard they worked. But this image on Juan Diego’s tilma said everything they had been trying to say. You have someone unimaginably glorious on your side, someone who loves you and humbly leads you to the real God.

The conversions started coming in by the dozens, then the hundreds, then the thousands. Ultimately it was millions. It was the largest mass conversion in history. And it was because the Mexicans knew they weren’t converting to the Spanish conquerors’ religion. They were coming home to their own Church, led by their own mother.

And what was her name?

She revealed it when Juan Diego asked her. Some scholars believe that Our Lady spoke a word in Nahuatl that was misinterpreted by the Spanish as “Guadalupe,” the name of a village in Extremadura, Spain, where Mary had appeared at the beginning of the 14th century.

It was the age of Europe’s glory and Europe’s shame. European voyagers circled the earth, but religious wars had Christians fighting Christians. It was also the age of Europe’s danger. The Turks, who had finally conquered the last vestiges of the Roman Empire in the East in the middle 1400s, were strong and in a mood for expanding.

Not since the great Islamic conquests of the 600s had Europe felt so threatened. One by one the Christian islands in the eastern Mediterranean had fallen to the Turks. Now the Turks had conquered Cyprus, until then a Venetian territory, and they seemed to be able to do what they liked in the whole Mediterranean Sea. They were thinking that maybe Venice and Rome might be next.

What would happen to the rest of Europe after that?

Pope St. Pius V had tried to bring all of Europe together in a Holy League to fight the Turks.

But Europe was difficult to bring together. Much of the northern half of the continent had gone Protestant and was not about to do business with the pope. France was still Catholic, but France might be happy to see her European rivals take a beating from the Turks.

Spain — well, Spain could spare a few dozen ships and the king’s brother.

Venice, of course, was in all the way, as were Genoa and some of the other Italian city-states.

But Spain, it turned out, had given two of her greatest gifts to the effort. First, the king’s half-brother, Don John of Austria, turned out to be a brilliant leader.

Then the archbishop of Mexico sent a copy of the image on Juan Diego’s cloak. It had been touched to the original, and it was reverently placed in the flagship of the fleet.

Meanwhile, the fleet sailed off to confront the Turks, and the pope led the assault on heaven. 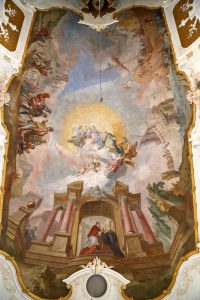 Ceiling fresco of the Battle of Lepanto showing Pope Pius V praying for victory, circa 1739, by Johann Baptist Zimmermann at the Church of the Assumption in Bavaria, Germany. (Wikimedia Commons)

Convinced that he needed supernatural help, the pope had rosaries distributed in all the ships. All the monks and nuns in Rome got orders to pray the rosary. The pope himself marched in rosary processions around the city. He was very ill at the time, but the battle was on, and he wasn’t going to miss it.

Over and over, thousands of people went around praying the rosary and started again, praying for the deliverance of Europe. The men prayed on the ships. The people marched and prayed in Rome. The monks and nuns prayed in their cloisters. The rosaries never cooled off.

And all the time the ships were rowing toward the Turks.

On Oct. 7, 1571, the pope suddenly stood up from a business meeting with his treasurer.

“Wait! This isn’t the time for business! It’s time to thank God! Just this moment our fleet has won the victory over the Turks!”

We can imagine the treasurer looking very confused. No messenger had come into the room, and news from the East would take days to reach Rome.

But the expression on the pope’s face conveyed absolute certainty. And he was right.

The greatest naval battle since ancient times had just been fought. Outnumbered by the Turkish fleet, the Holy League had nevertheless managed a tremendous victory. In the process, something like 10,000 slaves were freed from Turkish galleys.

As for the copy of the miraculous Mexican image, it came home with the Genoese admiral Andrea Doria. It can still be seen in Genoa to remind us of the time Europe was saved by the rosary — and by Our Lady of Guadalupe.