How Anglican devotion can enrich Advent for Catholics

One of the most beautiful things about our Catholic faith is how it encompasses such a wide range of traditions and practices that all evoke the one faith we profess.

For instance, I am a Catholic priest who belongs to something called a personal ordinariate, a structure equivalent to a diocese set up to welcome former Anglicans (sometimes called Episcopalians) into the full communion of the Catholic Church.

Thanks to the 2009 apostolic constitution “Anglicanorum Coetibus,” those who join the Catholic Church in these ordinariates are allowed to maintain certain liturgical, spiritual, and pastoral elements of the Anglican tradition. For example, in the ordinariates we worship according to our own liturgical books under the title “Divine Worship,” which contain many beautiful prayers and texts drawn from the Anglican heritage, and from its 500-year-old English-language liturgy. 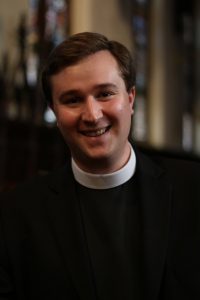 Father James Bradley is a British convert from Anglicanism.

This means that the way we celebrate Advent is a little different from other Catholics, but many of our distinctive ways of worship can enrich the prayer and devotion of other Catholics too.

For a start, in our Morning and Evening Prayer during Advent we do not recite the great hymn of praise, the “Te Deum,” which is said most days in our tradition. Instead, we replace the “Te Deum” with the “Benedicite.” This is the “Song of the Three Children” taken from the Book of Daniel.

Because it refers to the natural order, it is sometimes also called a canticle of creation and its place in Advent recalls the words of Pope Francis in “Laudato Si'” (“Praise Be to You”): the incarnation means “the mystery of Christ is at work in a hidden manner in the natural world as a whole.” Perhaps praying this text in the natural darkness of the winter months can instill in us a greater sense that in Christ all of creation is redeemed and made new.

For Morning and Evening Prayer, we also generally pray much longer passages of Scripture than you might be familiar with in the Liturgy of the Hours. In both the morning and the evening we usually read about a chapter of the Old Testament and a chapter of the New Testament. On the First Sunday of Advent we begin a continuous reading of the Book of the Prophet Isaiah. 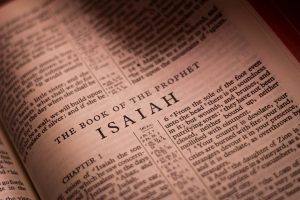 This goes all the way through to Christmas Eve, and so we hear throughout Advent the ancient, prophetic call to await with hope the coming of our Savior, Jesus Christ. Perhaps taking up this pattern of reading Isaiah might be a way for you to hear again the promise and hope that Advent brings.

That hope is also expressed in Advent in our meditation on the Four Last Things: death, judgment, heaven, and hell. So this is also a time in our tradition when we are encouraged to pray a special Office of the Dead. In the lead up to Advent, throughout November, we think of and pray for our beloved departed. As we ponder the Four Last Things in Advent, Divine Worship encourages us to add the Office of the Dead to our devotions to keep these themes alive.

In both Divine Worship and the Roman Missal in Advent we also hear a number of prayers that begin with the Latin phrase, “Excita, Domine!” This is translated into English as “Stir up, O Lord!” and it is a constant trope of the Advent liturgy.

In England, this phrase was traditionally heard on the Sunday before Advent, which we now keep as the feast of Christ the King. This gave rise to the name “Stir Up Sunday,” not just because of the call to stir our hearts, but because hearing this prayer for the first time would remind people to go home after church and stir up the Christmas pudding in preparation for the coming feast! 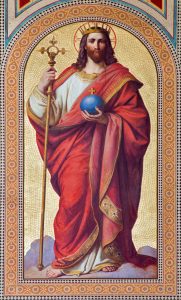 Fresco of Jesus Christ as King of the World by Karl von Blaas, 19th century, at Altlerchenfeld Church in Austria. (Shutterstock)

Two other texts are also popular in the ordinariates during this season. The first is the “Litany,” which is often sung in procession on the First Sunday of Advent to mark the start of the liturgical year. This echoes the ancient Roman tradition of singing the “Litany of the Saints” on certain days of penance like Ash Wednesday; a practice that we still see in the papal liturgy. In the “Litany” we invoke God to help us on our pilgrimage through Advent and on toward Christmas.

The other is the “Advent Prose.” This speaks of the coming of Jesus using themes found in the prophecy of Isaiah and brought together in a poetic text thought to have been written in Latin in the fourth century. The text was rediscovered by Anglicans in the 19th century and was translated into English, becoming popular as a simple chant to sing in place of hymns during Advent. It begins: “Drop down ye heavens from above, and let the skies pour down righteousness!”

The Anglican tradition is also known for its rich musical patrimony, and this stands out particularly during Advent. Hymns such as Charles Wesley’s “Lo, He Comes with Clouds Descending” look forward to the coming of Christ at the end of time, while the familiar strains of “O Come, O Come Emmanuel” seem to combine both our longing for Christ’s second coming at the end of time with the joy of his first at Christmas.

However we keep Advent in our own tradition, the beauty of the Catholic religion is that it encompasses a wide range of customs and practices that all evoke the one faith we profess. These “small t” traditions are all part of the one “capital T” Tradition that our Catholic faith proclaims. As we seek to learn from one another through the riches of these diverse gifts, this Advent I invite you to discover the beauty of what the Church has to offer in the personal ordinariates, and in doing s0 to come to know the Lord in the beauty of holiness.

What is a personal ordinariate?

In 2009, Pope Benedict XVI published the apostolic constitution “Anglicanorum Coetibus.” As the name suggests, this allows “Groups of Anglicans” (sometimes called Episcopalians) to come into the full communion of the Catholic Church.

Pope Benedict, in unison with the ecumenical vision of the Second Vatican Council, recognized that “some and even very many of the significant elements and endowments which together go to build up and give life to the Church itself, can exist outside the visible boundaries of the Catholic Church.”

In acknowledging this, “Anglicanorum Coetibus” provides for personal ordinariates. These are structures equivalent to dioceses, which allow former Anglicans to come into the Catholic Church individually and corporately. Three such ordinariates exist, and here in the United States the Personal Ordinariate of the Chair of Saint Peter was established in 2012. It is based in Houston and has parishes across North America.

In addition to receiving people into the Catholic Church, “Anglicanorum Coetibus” goes a stage further in its generous welcome. Certain elements of the Anglican tradition, which nurtured the Christian faith and prompted aspirations toward Catholic unity among Anglicans, can also be received. These, Pope Benedict says, are not just things that might sustain these communities of former Anglicans, now Catholics, but are “a treasure to be shared” with the whole Church.

Father James Bradley is a priest of the Personal Ordinariate of Our Lady of Walsingham (U.K.) for former Anglicans, and assistant professor of canon law at The Catholic University of America in Washington, D.C.