Four patriotic Americans on their way to sainthood

The Catholic Church in the United States has a long list of extraordinary men and women from all walks of life who are on their way to official sainthood because they lived Christian virtues to the extreme.

On this 4th of July weekend, we share some of them who, while living those virtues, were also extraordinary examples of heroic dedication to their country. 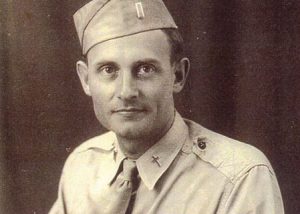 Father Emil Joseph Kapaun, a Kansas priest and a military chaplain, who died May 23, 1951, in a North Korean prisoner of war camp, is pictured circa 1943. A candidate for sainthood, he died ministering to prisoners of war during the Korean War. (CNS photo/U.S. Army courtesy The Catholic Advance)

Born in 1916 in Pilsen, Kansas, Emil Kapaun was ordained a priest in 1940 and became the parish priest in his hometown.

During World War II, he served as a Catholic chaplain in India and Burma, and continued his education in Washington D.C. until he was deployed to Korea.

In November 1950, during the Battle of Unsan, Kapaun tirelessly attended and comforted the wounded in the battlefield and saved many from being captured by the Chinese. He volunteered to stay behind on a battlefield with the injured. One of those injured was a Chinese soldier, who would later help Fr. Kapaun negotiate a surrender after being surrounded by enemy troops. Kapaun was taken captive by North Korean and Chinese troops.

As a prisoner of war, Kapaun went above and beyond in caring for the US soldiers at the camp, where they were severely mistreated and suffered from malnourishment, dysentery and an extremely cold winter. The Catholic Chaplain would tend to their wounds, retrieve the little food and fresh water he could get, and wash their clothes. He became legendary among those who knew of him. Scores of men attributed their survival to his works of mercy and the prayer groups we would organize around him as a way to provide hope and keep the soldiers warm.

Fr. Kapaun died in a prison camp hospital on May 23, 1951. The Diocese of Wichita has investigated his life since 2001 and officially opened the cause for his beatification on June 29, 2008.

In March 2021, Department of Defense investigators identified the remains of Fr. Kapaun among the unknown Korean War soldiers buried in a Hawaiian cemetery. His body was moved back to Kansas and interred at the Cathedral of Wichita. 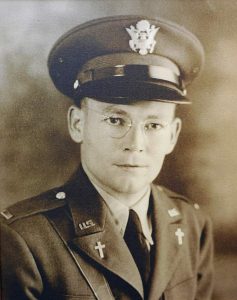 Father Joseph Verbis Lafleur, a World War II chaplain who gave his life while saving others on a Japanese prison ship, is seen in this undated photo. He died Sept. 7, 1944, when a U.S. submarine torpedoed the Japanese ship that he and over 700 fellow prisoners of war were aboard in the Indian Ocean. A priest of the Diocese of Lafayette, La., he is a candidate for sainthood and has the title "Servant of God." (CNS photo/courtesy Diocese of Lafayette)

Fr. Lafleur was born on January 24, 1912 in Ville Platte, Louisiana. During his summer breaks from Notre Dame Seminary in New Orleans, Lafleur would spend his time teaching catechism to first communicants.

He was ordained a priest for the Diocese of Lafayette April 2, 1938 and after becoming a member of the Knights of Columbus, he requested to be a military chaplain, just before the outbreak of the Second World War. Initially, his request was denied, but when the priest asked a second time, it was granted.

Fr. Lafleur wished to accompany the drafted men who had no choice but to fight in the war.  He was deployed to the Philippines, and spent two and a half years as a prisoner of war of the Japanese.

“Fr. Lafleur did a lot of work in the prison camps as well,” said nephew Richard Lafleur. “He gave his own food when they were starving to death.”

Men in the camps with Fr. Lafleur testified that his character caused the conversion of about 200 men to Catholicism while in the prison camp.

Fr. Lafleur earned the Distinguished Service Cross for Valor, and he ended up on a ship with other Japanese POWs that was torpedoed, unwittingly, by an American submarine that did not realize the ship was carrying POWs.

He was last seen Sept. 7, 1944 helping men out of the hull of the sinking ship, for which he posthumously earned a Purple Heart and a Bronze Star, and a second Distinguished Service Cross for his acts as a POW.

Fr. Lafleur’s body was never found, but a shrine and monument exist at St. Landry Catholic Church, where he grew up. 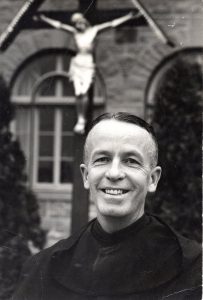 Benedictine Brother Marinus of St. Paul's Abbey in Newton, N.J., is seen in this undated photo. Before he became a Benedictine, he was Capt. Leonard LaRue, serving in the Merchant Marine during the Korean War. He is a candidate for sainthood and has the title "Servant of God." (CNS photo/courtesy The Beacon)

Born January 14, 1914, LaRue attended the Pennsylvania Nautical School. After his graduation in 1934, he served as the U.S. Merchant Marine Captain of the SS Meredith Victory during the Korean War.

LaRue was tasked with delivering military supplies to a port in Hungnam, North Korea, where hundreds of thousands of soldiers and refugees were searching for safety from advancing communist forces.

Arriving before Christmas, LaRue came to discover the multitudes of people who were awaiting help. He then chose to unload almost all of the ship’s weapons and supplies, in order to provide space for as many refugees as possible on the ship.

The USS Meredith Victory, which was designed to serve around 50 passengers, sailed away from the coast with approximately 14,000 refugees.

Father Pawel Tomczyk, postulator for LaRue's canonization cause said, “the fact that he was able to rescue so many without losing a single life” was inspiring.

As a religious brother, he lived a humble life, dishwashing, working in a gift shop, and serving his brother monks.

“This is the uniqueness of this cause in that he was one man but almost had two lives,” Fr. Tomczyk told CNA. “He combines the two vocations: One as a lay person, as a successful captain of a ship, and then the latter part of his life as a religious monk-as a Benedictine, a man of prayer and simplicity.” 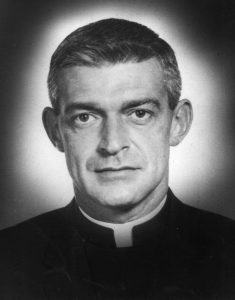 Maryknoll Father Vincent R. Capodanno, a Navy chaplain who was killed while serving with the Marines in Vietnam, is pictured in an undated photo. Fifty years after he put himself between a wounded Marine and fatal enemy gunfire, a new documentary recalls the life, faith and sacrifice of the priest, who is a candidate for sainthood. (CNS file photo)

Fr. Capodanno was born on Staten Island in New York City to Italian immigrant parents. In 1957 he was ordained a Catholic priest by Cardinal Francis Spellman, then vicar of the U.S. Military Ordinariate.

He entered the Maryknoll religious order and served as a missionary in Taiwan and Hong Kong from 1958 to 1965. Having successfully petitioned his Maryknoll superiors to release him to serve as a U.S. Navy chaplain, he arrived in Vietnam during Holy Week of 1966.

Conducting a prayer service in the field. / Father Capodanno Guild.

Holding the rank of Lieutenant, Fr. Capodanno participated in seven combat operations. He became known for putting the well-being of Marines above his personal safety, moving among those wounded and dying on the battlefield in order to provide medical aid, comfort, and Last Rites.

During Operation Swift on September 4, 1967, Fr. Capodanno was injured by an exploding mortar round which caused multiple injuries on his arms and legs and severed part of his right hand.

Fred Smith, head of FedEx Corporation, who served with Fr. Capodanno, recalled during the May 11 ceremony how the chaplain nearly lost his hand to shrapnel as he tended to the wounded, but refused care so that medical supplies could go to his injured Marines.

The priest directed Marines to help the wounded and continued to move about the battlefield, encouraging them with his words and example.

As he sought to administer aid to one particular marine, he placed his own body between the wounded man and an enemy machine gunner and died the victim of 27 bullet wounds, performing his final act as a good and faithful servant of God.

In 2006, the Catholic Church declared Fr. Capodanno a Servant of God.

He was posthumously awarded the Medal of Honor, the Navy Bronze Star medal, the Vietnamese Cross of Gallantry with Silver Star and the Purple Heart Medal. Soon after his death, the first chapel bearing his name was dedicated on Hill 51 in Que Son Valley, Vietnam.