During this year’s liturgical season of Lent, Angelus is featuring a four-part series of interviews with Catholic scholars on the “Four Last Things” in Christian eschatology: death, judgment, heaven, and hell.

Maria C. Morrow is something of an expert on sin and judgment. An independent scholar, she holds a doctorate in theology from the University of Dayton, and she is author of the widely praised book “Sin in the Sixties: Catholics and Confession, 1955-1975” (Catholic University of America Press, $65). She spoke with Angelus about the second of the traditional “Four Last Things”: Judgment.

It seems that the Gospel passage most quoted today is “Judge not lest ye be judged.” What exactly is judgment? And who gets to do it?

Judgment, first and foremost, belongs to God, who knows all. It can be dangerous to judge other people since we will never know the whole story. However, Jesus never said that we can’t judge right from wrong.

Part of living a Christian life is forming our consciences well so that we can discern right from wrong, acting in love and avoiding sin in our thoughts, words, and deeds. Justice is a virtue, and we should all desire and make efforts to grow in this virtue, judging right from wrong and acting accordingly.

This will sometimes involve judgment of others’ actions, but we can’t generally judge the people themselves as well as we might judge certain actions.

Is it possible to live a life apart from judgment? Is it possible for anyone to leave all judgment to God? If not, how can we learn to judge in a healthy way?

Judgment is a part of life! We will never be able to avoid it. And yet, we know that we often make mistakes in our judgment, so we benefit from recognizing God as the ultimate judge.

Seeking the wise counsel of others, as well as spending time in thoughtful reflection, can prevent us from rushing into problematic judgments of others. Often there is a charitable interpretation for others’ actions; this should be our first instinct. And when we are mistaken, we should, in humility, let this error lead us back to God.

Pope Pius XII once said that “the evil of this civilization” is “the loss of the sense of sin.” How exactly did we lose the sense of sin? What trends, events, and thinkers made us lose it?

It’s not easy to describe how we lost the sense of sin. There have certainly been tendencies in the past to emphasize sin to the point of causing inordinate guilt and scrupulosity in the faithful.

The spiritual paralysis resulting from such an overemphasis of sin was enough to convince some people — particularly in the ’50s, ’60s, and ’70s — that it might be better to forget about sin altogether.

This is what Dr. Karl Menninger described in his famous book “Whatever Became of Sin?” Pop psychology books such as “I’m OK, You’re OK” popularized the idea that judging ourselves and others was causing undue stress.

Sin has biblically and traditionally been described as a burden or weight, but an extensive list of inescapable sins with little relief led many to feel a sense of despair in regard to living a virtuous, holy life.

A common solution to this was to explain away the sin, saying it’s not really a sin, or to excuse the sinner for some reason or another, such as problematic influences in their upbringing or lack of self-control.

It’s not a good solution to the problem, however, because the flip side involves a loss of agreement on the identification of sin, and secondly (perhaps even worse!), a loss of the sense of free will and choice.

Does the loss of a sense of sin distort our understanding of God? It seems that every Christian generation has seen him eminently as a judge.

Without a sense of sin, we are prevented from recognizing the mercy of God. Key to the image of God as judge is the belief that God is merciful, that he wants to extend the grace of forgiveness to us.

St. Thomas Aquinas describes this in relation to penance. Our penance can never adequately compensate for our sin; our relationship with God is always characterized by inequality because God is so far above and beyond us. And yet, despite this, God accepts our penance in an act of relative justice.

His mercy is not unjust, but rather transcends justice. When we lose the sense of sin, we also lose the opportunity to benefit from this relative justice extended to us. To borrow the phrase of biblical scholar Gary Anderson, the system is “gamed in our favor.”

If we deny our sins, we subvert that system, putting ourselves in a position to suffer from God’s absolute justice rather than benefiting from the relative justice that he wants to extend to us. 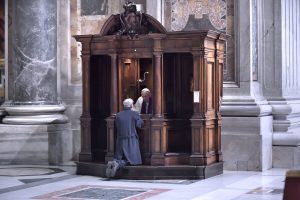 How does God judge us? How does this happen from day to day? How does it happen at the end?

God’s judgment is objective because he knows our will, conscience, context, and knowledge perfectly. Day by day, his judgment allows opportunities for us to grow closer to him, both in choosing well and growing in virtue and holiness, as well as in sinning, which gives us the opportunity to return to him in humility.

At our death, we will have a personal judgment where we are judged by God on the gravity of our faults, but also with God’s mercy. At the final end, we will find public judgment, understanding how the sins and works of our life fit into the full tapestry of salvation history woven by God.

How can the sacraments and structures of the Church help us to cultivate a healthy sense of judgment — of ourselves and others?

The sacraments and structures of the Church help to form us in the theological virtues of faith, hope, and love. They expand our vision to encompass heaven and earth, recognizing the reality of the Kingdom of God. We find that we already share in Christ’s victory over death, and we can participate in the kingdom, alongside the angels and saints.

This knowledge can assuage fears of judgment. While we know that we are sinners deserving of punishment, we also know that we are children of God, whose grace reaches out to us and others in all circumstances and situations. We genuinely care about judgment and thus desire to live virtuously without sin.

We know that we will be happiest when we do God’s will, and the sacraments and structures of the Church aid us in doing this. But they also aid us when we fail, liberating us from sin and sustaining our hope. Even our mistakes can bring us and others closer to God.

Jesus uses the word “hypocrite” to describe people who judge unjustly, and they receive his strongest condemnation, but the other New Testament authors never use the word. Why do you suppose this is so?

God is the ultimate judge with the right and power to judge, and Jesus truly knew the hearts of those he described as hypocrites. Thus Jesus was fully capable of making an accurate assessment.

The apostles and other disciples, including the New Testament authors, might exhibit more caution before making such a harsh judgment, as they could not know or understand people’s intentions so clearly.

How can we sinners make moral judgments without convicting ourselves as hypocrites?

We must, first and foremost, recognize ourselves as sinners. In humility, we should keep in mind the possibility of being mistaken in our judgment; we can remember our own experiences of being unfairly judged. 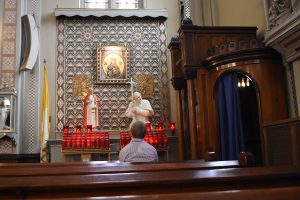 It is also helpful to cultivate good friendships and look for charitable interpretations of others’ questionable actions before rushing into judgments. Having a solid prayer life can aid in our ability to make moral judgments.

Admonishing the sinner is considered a spiritual work of mercy in the Church, but such an act also presumes a community of like-minded believers, who genuinely want what is best for each other and thus give and receive correction with that in mind.

What practical ways can we prepare ourselves for God’s judgment this Lent, at the hour of death, and in ordinary time?

The most crucial way of preparing ourselves for God’s judgment is seeking his mercy and forgiveness in the sacrament of reconciliation. The season of Lent is an excellent time to receive this sacrament, and it is even expected of Catholics annually in preparation for Easter.

It is also wonderful to receive the sacrament in preparation for one’s death. However, the sacrament of confession should not be relegated to Lent or death! To make the most of this sacrament, we should seek it frequently, developing a habit of examining our consciences, confessing our sin, and making reparation in small acts of penance.

Perhaps even more importantly, regular confession helps us develop a habit of seeking God’s grace and mercy. Although the sacrament involves intentional human action, it is the divine action, ministered by the priest in absolution, that is a great gift to us.

Cultivating a desire for God’s mercy and forgiveness allows us to grow in humility and prepare ourselves for God’s judgment.