Dorothy Day: A saint for our ‘long loneliness’

Eighty-nine years to the day after Servant of God Dorothy Day asked God to reveal his will for her service to him and those who struggle the most, the Archdiocese of New York capped an in-depth investigation of her life and holiness with a special Mass at St. Patrick’s Cathedral.

The fateful day in 1932, as it happens, fell on the feast of the Immaculate Conception and found Day praying in the national basilica of the same name in Washington, D.C.

“Folks, you’re witnessing history,” the archbishop of New York, Cardinal Timothy Dolan, told those attending the Dec. 8 liturgy, where the materials produced by the investigation were physically blessed before being sent to Rome.

History, yes. But what rang clear to me, sitting in the pews of St. Patrick’s, is that Day, the social activist who co-founded The Catholic Worker newspaper and movement with Peter Maurin, can be a transformational figure in the Church today — if we let her.

There’s a false divide in the Church between people who prioritize what is typically associated with “social justice” — caring for the poor, the immigrant, the marginalized, the environment, the prisoner — and pro-life issues, chiefly abortion, but also assisted suicide, and all other threats to human life. 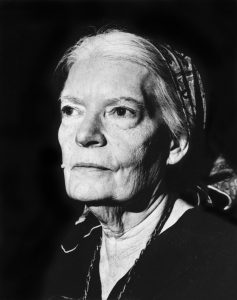 A still from "Revolution of the Heart: The Dorothy Day Story," a film by Martin Doblmeier. (CNS/courtesy Journey Films)

But figures like Dorothy Day show us that we can love them all, while still having our own individual calls to whom we specialize in helping. For Day, that was whoever happened to be in front of her.

We don’t yet know if she will be canonized. The end of the archdiocesan investigation now puts her cause for sainthood in the hands of the Congregation for the Causes of the Saints in Rome, which will review the local findings and further examine her life, including for possible miracles that can be attributed to her intercession.

One of the things I’ve found about Day is that political differences sometimes get in the way of loving and understanding her. But I like to think back to a memorable line that Archbishop José H. Gomez said about her a few years ago: “I don’t know if she’s a saint, but I know she makes me want to be one.”

Her writings, including her autobiography, “The Long Loneliness,” are remarkable for their resonance, maybe in a particular way to the lives of women suffering the painful consequences wrought by the Sexual Revolution.

Before her conversion, Day had an abortion. She wasn’t promiscuous; she thought she was in love with the father of her daughter, Tamar, a man who would not marry her. Human life and love are complicated, and her endurance and trust in God and his mercy makes her a tremendous witness — and intercessor — for women and men carrying the wounds of the culture we live in.

But in her work and writings, Day also seemed to foresee the consequences of the epochal change sparked by an ongoing pandemic.

Explaining the heart of the Catholic Worker, Day wrote in her autobiography “The Long Loneliness”: “We cannot love God unless we love each other, and to love we must know each other. We know him in the breaking of bread, and we know each other in the breaking of bread, and we are not alone any more. Heaven is a banquet and life is a banquet, too, even with a crust, where there is companionship.”

To those suffering from fear and isolation in a time marked by disease and death, she gives us this: “We have all known the long loneliness and we have learned that the only solution is love and that love comes with community.”

If there’s anything that Day — and the COVID-19 pandemic — have taught us, it is that the last thing the human heart needs is more isolation from others. God did not make us to be alone in the world, nor does he leave us alone in it. It takes the presence of a community to help us realize this, the greatest reality of our lives.

One of the remarkable things about the Mass was that it coincided with the cathedral’s monthly Mass for young adults. So, gathered that night for eucharistic adoration, confession, and Mass were the young adults of the archdiocese, joined by family and friends of the Dorothy Day Guild. Her granddaughter, Martha Hennessey, was one of the readers, the eulogist at her funeral Mass, and was among the gift bearers. Again: Dorothy Day unites, if we let her! 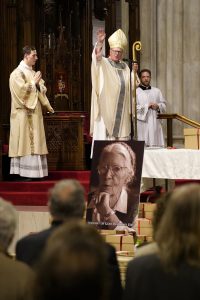 Day is widely quoted as having said: “Don’t call me a saint. I don’t want to be dismissed that easily.” Fortunately for those involved in her canonization cause, I think it’s safe to assume she was speaking in terms of her life on earth.

But it’s also good news for us. I often hear this attributed to foster parents: “They are such saints,” which essentially translates to “I could never do such a thing.” Well, odds are, they could never do such a thing either, not without essential things like a community of fellowship, mentoring, and practical resources. The difference between them and the declarer is likely a simple fiat — a trusting yes!

Dorothy Day’s life of conversation was just that. She took people who felt orphaned, whether because of mental illness or a host of other reasons. In constantly going to Jesus for strength, Day is a model for how to live in a world full of dangerous distractions. It can be done. It must be done.

We are all called to be saints. Which is why I don’t think she would mind being among them now in eternity — and acknowledged on earth — because it helps show the Christian way.

Utopia or salvation? Behind Latin America’s losing its religion

Saint of the day: Agnes

The pro-life movement must focus on Democrats after Roe