When Italy, the public display of affection (PDA) capital of the world, shuns handshakes and discourages kissing, one might well imagine the apocalypse is close at hand. Indeed, the news out of the Bel Paese — schools, shops, museums, and coffee bars closed, soccer championships played behind closed doors, citizens confined to their homes — evokes thoughts of the Black Death that ravaged Europe 700 years ago.

While not as lethal as the bubonic plague or other devastating epidemics of Italy’s past, the coronavirus (COVID-19) nonetheless gives serious cause for concern. The number of deaths (1,809 as of this writing) is not indifferent and the virus’ long incubation period makes its spread extremely difficult to contain.

The Italian government has been rolling out decrees on a daily basis, effectively turning the country into a police state, closing down everything but food stores, newsstands, and tobacconists (yes, you read that right), with patrol cars cruising the streets looking for citizens out of their residences without due cause or the proper papers.

Yet for many, the actions of the state were less worrisome than those of the Church, whose leadership was conspicuously absent until very recently. For the first 10 days of the virus, the official pronouncements of the Italian Church seemed a mere echo of the safety measures established by the civil authorities.

The Church’s pastoral program began with hygiene and social distancing, first removing the sign of peace and holy water, then suspending public Masses. Then, on March 12, the vicar of Rome, acting under Pope Francis’ authority, announced the closing of all Rome’s churches, even to private prayer, leaving the faithful feeling abandoned and confused, with no sacraments and no distinctive message of salvation.

Italians had gone from freedom to confinement in a matter of days, while Church leaders prepared to board up places of worship, claiming that they were only following orders of the civil government.

And then something amazing happened. Less than 24 hours after Pope Francis had approved the closing of Rome’s churches, he reversed the decision and ordered all parishes and mission churches reopened.

This about-face is best illustrated by a letter dated March 13 signed by the pope’s personal secretary, but widely thought to be written by the Holy Father himself. Circulated among the Roman clergy, the letter urged priests to go out to God’s people, since their place is on the “front lines” in this crisis.

“Think of all the souls who feel terrified and abandoned because we pastors follow the instructions of civil authorities — which is right in these circumstances to avoid contagion — while we risk putting aside divine instructions — which is a sin,” the letter reflected, while insisting that priests make the Eucharist and confession available to the faithful.

“We think as men think and not as God thinks,” the author continued. “We join the ranks of those who are terrified rather than joining the doctors, the nurses, the volunteers, the health care workers, and mothers and fathers, who are on the front lines.” 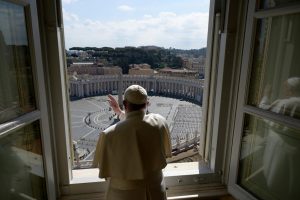 Standing in the window of the Apostolic Palace overlooking an empty St. Peter’s Square, Pope Francis blesses the city of Rome March 15, still under lockdown to prevent the spread of the coronavirus. (Vatican Media via Reuters)

This letter revealed the battle against naturalism, the reduction of everything to the pleasures and pains, the benefits and trials of this world, that underlies part of this crisis. The Church has battled this mindset for centuries. While recognizing the value and legitimate autonomy of the things of this world, her mission has always been to point beyond, to stir souls to “seek the things that are above, where Christ is, seated at the right hand of God” (Colossians 3:1–3).

In his first encyclical letter, “Deus Caritas Est” (“God is Love”), Pope Benedict XVI underscored an essential distinction between the respective roles of the Church and civil government. Whereas charity is the distinctive domain of the Church, the “just ordering of society and the State is a central responsibility of politics,” he wrote, and therefore justice “is both the aim and the intrinsic criterion of all politics.”

“For her part, the Church, as the social expression of Christian faith, has a proper independence and is structured on the basis of her faith as a community which the State must recognize. The two spheres are distinct, yet always interrelated,” he said (DCE, 28a).

At the heart of the Church’s charity we find solicitude for the spiritual good and eternal salvation of souls and this is, and always has been, the Church’s primary concern.

Pandemics are scary. Much of what terrifies us is the lack of control that disease and its attendant consequences (quarantine, disruption, uncertainty) bring. The medieval world knew it had little control over much of anything — nature, weather, war, overlords — but the contemporary world is accustomed to a feeling of self-determination. A society used to thinking it controls everything from climate to gender is poorly equipped to weather the storm of unpredictability that epidemics bring.

Julián Carrón, president of the ecclesial movement Communion and Liberation, addressed this problem in the Italian newspaper Corriere della Sera: “A fear, always in the back of our minds, explodes when reality exposes our essential powerlessness, for many people, taking over and, at times, prompting impulsive reactions: pushing us to close ourselves up, shy away from any contact with other people to avoid contagion, stockpiling provisions…” 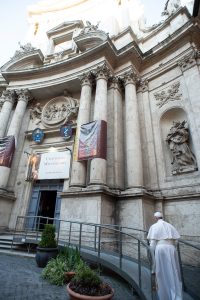 Pope Francis arrives to pray at the Church of St. Marcellus in Rome March 15, 2020. The pope prayed as coronavirus deaths in Italy peaked at 368 in a 24-hour period, bringing the total number of deaths to 1,809 out of 24,747 cases. (Vatican Media)

This fear has many outlets. Giovanni Boccaccio’s book “Decameron” recounts how during the great plague of 1348, a group of young people fled to the safety of the countryside to enjoy leisurely and amorous pursuits. On the other hand, during the deadly 1918 Spanish flu epidemic that claimed an estimated 50-100 million lives, St. Jacinta of Portugal chose, as she endured excruciating treatments, to offer her suffering for the conversion of souls.

Carron reminds us that situations like these “reveal what kind of progress we — each of us personally and all together — have made on the path of maturity, how much self-awareness we have gained and how capable we are of facing the life in front of us.”

Historically, the Catholic Church has had a crucial role to play in time of pestilence. She has been on the front lines of epidemics, infectious diseases, and mortal danger since her founding. The pampered son of the mayor of Montpellier, 14th-century St. Roch, was transformed into a missionary to the sick, traveling throughout Italy ministering to the infirm.

Our woke world would probably accuse him of irresponsibility, spreading contagion wherever he went, yet for centuries he was invoked as the patron to ward off plague. The formation of the Christian, intent on gaining a greater world than this, helped to forge courage in the face of epidemic in the most unlikely places.

For his part, St. Charles Borromeo was the privileged scion of a Medici who worried more about his appearance and his erudition than the spiritual needs of souls until the 1576 plague in Milan called him to hands-on service. This patrician waded into the fray, ministering to the sick and encouraging other priests to do so as well. For where all the world saw death and desolation, he saw a glimmer of possibility to save souls.

St. Charles hoped for heavenly glory, writing to the religious in Milan that service in a time of epidemic is “the stuff of martyrs.” He encouraged his clergy that this was a “desirable time now when without the cruelty of the tyrant, without the rack, without fire, without beasts and in the complete absence of harsh tortures which are usually the most frightful to human weakness, we can obtain the crown of martyrdom.”

He was continuing the course set by St. Thomas Aquinas, who wrote that “in the case where one is bound to look after the salvation of his neighbor, he is also bound to expose his bodily life to dangers for the sake of that salvation” (On Charity, art 11).

In the end, this focus on the eternal salvation of souls follows on the words of Jesus regarding the preeminence of the eternal good over all temporal goods, including health and life itself. “For what does it profit a man to gain the whole world, and forfeit his soul?” (Mark 8:36).

Christian art raised its own voice to drive home this point. After the Black Death, images of the Last Judgment transformed from showing static scenes of Christ in glory into murals of dynamic events unfolding over vast surfaces. Figures rising and falling, windows into hell focusing on dire punishments for sins like lust, avarice, and gluttony, warned against petty attachments that could hinder a soul’s attainment of eternity.

Buonamico Buffalmacco’s “Triumph of Death,” painted between 1336 and 1340 for the Camposanto of Pisa, was one of the most powerful compositions of its kind. Occupying an imposing space of wall, it was meant to overwhelm the viewer. Amorous suitors and gossiping women cavort in a garden, unaware that Death, a wizened hag with bat wings, is flying above them, scythe in hand.

Buonamico Buffalmacco’s "Triumph of Death," painted between 1336 and 1340. (Wikimedia Commons)

She is coming for the unsuspecting youths, and ignoring the group of old, crippled people beckoning her to come for them. Art in a time of plague promoted the virtues of detachment and preparedness, taking advantage of these moments when mortality was on the minds of all.

The early ecclesiastical silence regarding matters of eternity prompted Italian historian Franco Cardini in the Italian daily La Stampa to declare that “we have lost our sense of the sacred” while warning against “the divinization of science.”

“We have severed the roots that kept us in touch with the dimension of transcendence,” the historian continued. “The true great epidemic of our day is our savage and desperate fear. During the plague of 1630 it was known that death is not the end of everything.”

God is not indifferent to the ordeals his children suffer and neither is the Church. Now is the time to assist the sick and suffering, to reach out to the lonely and confused, to tend to the needs of the least of our brethren.

Yet along with the care of the body, the Church has a preeminent vocation to care for the good of souls and to remind the faithful which is ultimately more important. Like St. Mary, hers is the better part, and it shall not be taken from her.

If the authentically evangelical attitude running through the pope’s alleged letter were to take hold of the Church’s pastors, we could be in store for a glorious period of witness. In this moment when the laity’s trust in their bishops and priests has plummeted due to worldly scandal and corruption, this could be an opportunity to win back the hearts and souls of the faithful as they face tough decisions regarding the spiritual care of their flock.

The coronavirus has offered the Church hierarchy the chance to prove themselves to be true shepherds rather than “hired hands” (see John 10:11-12).

As Pope Francis has written, “The government has the duty to guarantee care and material sustenance for the people but we have the duty to do the same for their souls. May it never be said: ‘I’m never going back to a church where no one came to find me when I needed help.’ ”