Anderson: Like worship, Christian witness is essential to religious liberty

A top concern for Carl Anderson, the now-retired CEO of the Knights of Columbus, is preserving religious freedom in this country.

"It's not so much about arguments over separation of church and state but the values the faith brings to our culture -- the necessity of Christian witness," he told Catholic News Service.

"We have to understand why free exercise of religion exercise is so important to America's constitutional framework," he said. "It is after all the first right in the Bill of Rights -- they (the Founding Fathers) had a lot of other choices but they put it in first because they believed it involved the most important issue human beings deal with."

"Many secularists are trying to reduce that right of worship -- free exercise (of religion) goes far beyond that," he said. It's about living "your life according to your religious convictions -- that always has been the Catholic understanding."

To "defend what we value, we have to demonstrate the values we bring to society particularly as Catholics ... that hold society together" when there is so much "violence, discord, alienation" today, he said.

For the Knights, those values are the four core principles that drive all they do in church and society: "charity, unity, fraternity, patriotism."

Anderson retired Feb. 28 as Supreme Knight upon reaching the organization's mandatory retirement age of 70. He was succeeded by Patrick Kelly but continues to serve on the Knights' board of directors. 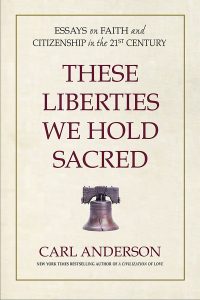 This is the book cover of "These Liberties We Hold Sacred: Essays on Faith and Citizenship in the 21st Century" by Carl Anderson. The book is reviewed by Timothy Walch . (CNS photo/courtesy Square One Publishers)

He is the author of several books, including "These Liberties We Hold Sacred," published earlier this year by Square One Publishers. It's a collection of his speeches, essays and articles over the last few years addressing "this first freedom" -- religious liberty -- as well as the sanctity of life, faithful citizenship and the family.

The best example of Christian witness in the book , Anderson said, is the work the Knights of Columbus did "to defend Christians in Iraq from genocide" by pushing the United States to officially declare it genocide, which finally happened in 2016.

The Knights and In Defense of Christians released a report that year documenting hundreds of killings of religious minorities by Islamic State fighters, which led then-Secretary of State John Kerry to make the genocide declaration.

It's the perfect example of the responsibility Christians have to engage government on important issues, Anderson said. "It's incumbent on Catholics we are engaged in the political process, government process and that we can work in bipartisan fashion."

This effort on genocide involved -- among others -- Kerry, the Obama administration and U.S. Rep. Anna Eshoo of California on the Democrats' side and, on the Republicans' side, Rep. Chris Smith of New Jersey and Mike Pence, both when he was a member of Congress from Indiana and after he was elected vice president in 2016.

The declaration ultimately led to the Iraq and Syria Genocide Relief and Accountability Act of 2018, signed into law by President Donald Trump to hold IS militants accountable as perpetrators of genocide and provide humanitarian relief to their victims.

The Knights of Columbus have had a role in rebuilding portions of northern Iraq since 2014; the organization has spent over $25 million to help in the recovery of persecuted communities in Iraq and Syria, including by helping build a sustainable infrastructure amid the fraternal organization's calls for greater security for returning religious minorities in northern Iraq.

Anderson commented on Pope Francis' historic pastoral visit to Iraq March 5-8, saying: "I think we have a courageous pope he has a missionary spirit, a missionary heart and that was so evident" during the trip.

"His trip was a tremendous service to the church in Iraq," he told CNS. "I hope it elevates the standing of the Christian community in that part of the world that is in so many ways treated as second-class citizens."

The role of the church in Iraq is "very important for our own understanding of religious liberty and our service to our own society," Anderson said.

"Today, the Christians of the Middle East are a brilliant example to the world -- and especially to Christians," he wrote in the book. "They forgive their tormentors and practice their faith in spite of what, for many of us, are truly unimaginable costs."

In the United States, we take religious freedom for granted, Anderson said, adding that there needs to be "a strong internalization of the faith" to stand up to the "constant pressure" to diminish this freedom.

"Catholicism isn't something external to the American experience," he added, saying it has been part of the nation since its founding. Each generation of immigrants from Catholic countries, like the Irish, the Italians and now those from Latin America, and their traditions, he said, have added "to our own understanding of being an American."

For Anderson, the high point of his tenure as the top Knight was the Oct. 31, 2020, beatification of the organization's founder -- Blessed Michael McGivney.

But he also said that what was "most edifying" to him over the years was "the tremendous expansion of the Knights charitable work in so many countries, not only U.S., Canada, Philippines, Mexico, Korea, France, Poland but in Africa, in Latin America and Asia."