After a year of fear, are we ready for the promise of Easter?

“I need someone who will sacrifice and lay down life for me.”

At least I think that’s how he said it. I do not remember hearing “her,” although I certainly know that’s what he meant. He does not know how to live without a wife — his wife of almost six decades died a few years ago, somewhat suddenly.

“She went into the hospital in April and never came out. She died in there.” Michael had approached me as I was leaving church. It was a beautiful spring day and he was looking for something.

He thinks it is a wife he wants, but he is asking other questions, too. A baptized Catholic, he goes to Mass every six months or so. It was Lent, but he had no idea, as he confessed to me. When I told him, he seemed pleasantly surprised — a reminder of his more practicing days and the faith of his late mother. It was obvious to me he was looking for the Resurrection. He was looking for the hope that only the risen Christ can give.

“It’s a long story,” he answered about whether he believes in Christ’s resurrection. 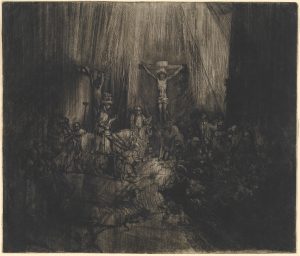 Rembrandt van Rijn's drypoint and engraving on laid paper entitled "Christ Crucified between the Two Thieves (The Three Crosses)." Many of the figures in the print are faint, almost ghostly in appearance, while Christ alone has substance. (CNS/Rosenwald Collection via National Gallery of Art)

In a homily given March 22 last year (just days after the entire country went into full lockdown) to an empty St. Patrick’s Cathedral, New York’s Cardinal Timothy Dolan preached on what it means for Jesus to be “the light of the world who can cure the darkness that afflicts us all.”

“I’m finding myself welcoming light these days,” he said. “Yesterday, in spite of it all, when I took a little walk outside, it was bright. The sun was out even at six in the evening. The first day of spring was just the other day, and the light was so refreshing, pushing back the wintry, chilling, morbid darkness. It reminds us that Jesus is the light of the world.”

It is moments like that conversation with Michael that make the Resurrection more than a conceptual truth. He was walking the streets of Greenwich Village that Sunday morning looking for light. He said he found light in me not ignoring him, even though I initially did when he made an inappropriate remark.

This man needed some good news, and especially on a Sunday. How could I not help extend God’s invitation to him?

So what actually is the Resurrection for us? The Catechism of the Catholic Church calls it “the crowning truth of our faith in Christ, a faith believed and lived as the central truth by the first Christian community; handed on as fundamental by Tradition; established by the documents of the New Testament; and preached as an essential part of the Paschal mystery along with the cross.”

This reminds me of my favorite moment of the year: When the Exultet proclaims:

“This is the night,

when Christ broke the prison-bars of death

and rose victorious from the underworld.

Our birth would have been no gain,

had we not been redeemed.

O wonder of your humble care for us!

to ransom a slave you gave away your Son!

destroyed completely by the Death of Christ!

that earned so great, so glorious a Redeemer!”

“O happy fault!” I can get to a point of spiritual despondency during Lent, seeing all my sins under a magnifying glass. But then we get to these sung words and it all makes sense — we have purpose and a future because God has had mercy on us, and is the only one capable of bringing life out of our death, from our sin.

There is nothing to fear with this being true! It is in our weakness that God heals and strengthens us with his merciful love.

I feel like I have been holding my breath since last March to hear “O happy fault!” chanted in my presence, just before being present for the consecration at Easter Vigil Mass.

Last Easter, I sat with my laptop and my phone and I watched several Masses, starting with Pope Francis at St. Peter’s, along with Archbishop José H. Gomez in Los Angeles and Archbishop Bashar Warda in Erbil, Iraq. I never managed to “get enough,” because it was Christ’s eucharistic presence I was looking for, not the poor virtual substitute. The internet just could not provide. 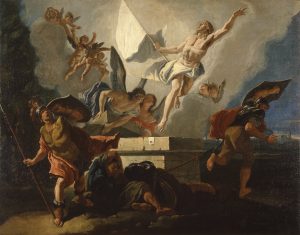 I keep going back to Cardinal Dolan, because he has a new volume, “I Am with You: Lessons of Hope and Courage in Times of Crisis” (Loyola Press, $12.99). It’s a collection of some of his homilies and columns from last year’s lockdown.

At Holy Thursday Mass last year, he talked about “the stunning act of selfless sacrificial service” that Jesus showed to the Twelve on the night of the Last Supper.

“Even though he was the Messiah, he washed the feet of His apostles as if He were a slave. Second, He gave them the gift of the most Holy Eucharist, by which He feeds us and remains with us to this very moment, by changing bread and wine into His very Body and Blood. And third, He gave us the priesthood, to continue the gift of the Holy Eucharist, instructing them to ‘do this in memory of me.’

“We really need this example of Jesus right now. We’re scared and anxious, discouraged by this pandemic all around us. We could be excused for curling up and feeling sorry for ourselves, being bitter if we are afflicted or worrying over someone close to us who is.

“Or we could imitate Jesus, thinking not of ourselves but of others, loving them till the end.”

The spring of last year was a brutal time for those of us who depend on the sacraments. It really stretched our humility and endurance. For me, it felt like Lent never ended, and so there was something strange about celebrating Advent and Christmas when Easter never felt like it happened. A new year seemed impossible when something felt so incomplete.

In other words, I feel like I have been waiting for the Resurrection for going on a year now.

Well, our long Lent is over this Easter. We have a chance to invite someone to Mass with us, or to share with them what the Resurrection means in our own, imperfect lives, and that this event is everything. Do we live rejoicing in this truth?

Michael was a little bewildered at my insistence about how much God wanted him in the confessional. He said he really “admired” my faith. I told him there is nothing to admire. I know I’m nothing without God. I know how weak I am. I had the most intimate and intense encounter with this during the shutdown. I know there is no strength except that which comes from the Father, Son, and Holy Spirit.

Perhaps the best part about Easter is that it is not one day, but rather 50 days of rejoicing for the Church. God has sacrificed and laid down his life for you and for me, forgiving our sins and offering us his spirit to be able to do the same toward others. How can we not rejoice? How can we not share?

Like Michael, we are all looking for that “someone.” This Easter, make the most of the chance to find him, to rediscover his forgiveness and mercy — including in the sacrament of reconciliation. He wants to give us more than anything we could dream of asking for: himself.