‘Why Celibacy?’ points to the kind of men the Church needs today

There is a “No Right Turn” sign is at the top of my street, which directs all traffic to make a left turn. When asked about the sign, all of the neighbors say the same thing: “It’s been there for years, and nobody pays attention to it.”

Eventually, I asked the township manager, “Why is that sign there? Especially since cars always turn right?”

I thought of that sign as I read the new book by Father Carter Griffin titled “Why Celibacy?: Reclaiming the Fatherhood of the Priest” (Emmaus Road, $24.95), which seemed to ask a similarly perplexing question being asked of a Church dealing with priest shortages, an Amazon synod, and a reawakening sexual abuse crisis: Why do Catholic priests make a promise of celibacy?

Reliable and current statistics about priestly celibacy are difficult to find. An oft-cited statistic comes from therapist Richard Sipe’s research and clinical experience with priests in 1990, which estimated that about 50% of Catholic priests were faithfully living their promise of celibacy. Even if such an estimate is higher than reality, Sipe’s work continues to prompt the question: Why require celibacy if priests do not adhere to such a lifestyle? 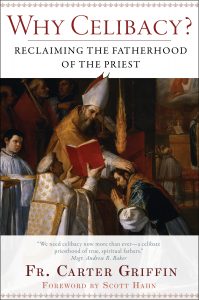 After reading “Why Celibacy?” I can say that it spoke to me as a professor, a psychologist, and a lay Catholic father. The book is very readable and is written with accessible language without sacrificing depth or complexity. Griffin unpacks and connects core concepts of celibacy, fatherhood, masculinity, seminary formation, and the priesthood. He offers a systematic analysis of those topics based on years of research and study that makes the book required reading not only for Catholic priests, but for all Catholic men.

A primary strength of the book is that it offers a clear and powerful Scripture basis for celibacy and spiritual fatherhood, which is reinforced in the Catholic tradition. Drawing from Trinitarian theology and Christology, Griffin uses Scripture to depict Jesus as the model priest who lived a celibate lifestyle who, while being the Son of God, also embodied the Spiritual Father.

Griffin offers a biblical-theological perspective on the celibate fatherhood that presents both a bold challenge and big opportunity to Catholic priests. The bold challenge is for priests to faithfully live out their promise of celibacy in the way Griffin speaks of, such as being generously available to people, preaching the truth on difficult moral topics, and centering their priesthood on the Eucharist.

After reflecting on the book for a few weeks, the point that stuck with me the most was Griffin’s assertion that a priest’s spiritual fatherhood is best judged by the fruits of his eucharistic life to the people. In the United States, more parishes are closing, Mass attendance is decreasing by the week, and national surveys indicate that Catholics’ belief in the Eucharist is waning.

Griffin lays down a challenge to his brother priests that comes with the opportunity to revitalize parishes, to give people a reason to return to Mass, and to increase faith in the mysteries of Catholicism. Priests, Griffin argues, can accomplish this by living out their spiritual fatherhood in the Eucharist.

It is clear that Griffin is firmly in the “pro-celibacy” camp. Anyone looking for a balanced presentation of pros and cons to celibate versus married priesthood will have to read a different book. As such, the book at times seems to idealize celibacy and to overstate its benefits to the priesthood and the Church. Two critiques result from his enthusiastic view of celibacy.

First, he downplays the lived reality of married clergy in the Eastern rite and the corresponding Scripture and theology that has permitted men to assume the dual vocation of married-priest in the Catholic Church.

Second, the book presents an aspirational image of celibacy, which seemed unattainable in some regards. Fortunately, Griffin is engaged in seminarian formation, to which he devoted Chapter 3 in the book. He outlines practical and time-honored ways in which seminaries can form the next generation of chaste fathers to serve the Church. Regardless of whether celibacy someday becomes optional, men in seminary formation will always need to discern celibacy.

Griffin’s passion for seminary formation means he’s not afraid to tackle some controversial topics related to the selection of men for priestly formation, such as same-sex attraction. In his desire to convey orthodox Catholic teaching about homosexuality, he cites a research study from Father Paul Sullins that he claimed found a “direct causal” link between homosexuality and the sexual offending of minors by Catholic clergy.

The research study by Sullins has scientific merit. However, it employs basic statistical techniques of bivariate correlations and multiple regressions, both of which are incapable of inferring causality. Sullins, knowing this as a social scientist, does not use causal language in his 50-page report.

A more accurate statement would be that Sullins’ analysis found a statistically significant correlation between the reported number of clergy sexual abuse allegations and an increased number of homosexual priests in the United States. Like any social science research, Sullins’ study has limitations and should not be used so inaccurately or conclusively.

As I drive up my road now, the “No Right Turn” sign has been taken down. The neighborhood has adjusted and so far, there have been no driving accidents at that intersection.

In a similar way, the Church seems to be at an intersection with required priestly celibacy. Eastern Rite priests can marry. Married Anglican priests who convert to Catholicism can assume priestly faculties in the Catholic Church and remain married. This month’s Synod of Bishops for the Pan-Amazon Region will discuss the possibility of ordaining married men of proven virtue (“viri probati” in Latin) to the priesthood in remote areas to address pastoral shortages.

Although my township took the road sign down, the Church has yet to make a decision about required celibacy in the Western rite. In discerning a decision, the Church would be wise to take into account Griffin’s cogent thesis. Even if celibacy is being questioned today, he lays out a beautiful image of the modern celibate priest as a spiritual father who protects, guides, sacrifices, teaches, and ministers to the people with courage, love, and responsibility. Those are the men the Church certainly needs to live out their priestly vocation.