What ‘Stars and Strife’ documentary misses about America’s identity

“America’s like a dysfunctional couple on the way to divorce court.”

“This is a political food fight.”

“America’s going through an identity crisis.”

These statements and many others open the recent documentary from Virgil Films, “Stars and Strife.”

And indeed, it’s not hard to believe them. Even without the dozens of clips of politicians and pundits screaming at one another, a glance at the latest news cycles makes clear that division and vitriol are rampant in our society. The goal of this documentary, released Aug. 11, is to find out why.

It’s a noble goal on the part of David Smick, who wrote and directed the film, but the end result is sadly just as disjointed as the America it portrays. Without discussing the root causes of the stress fractures ailing our country today, the film overwhelms viewers with a patchwork of problems without a constructive solution. 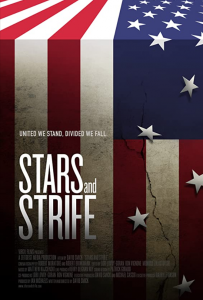 America is indeed going through an identity crisis, but not because that identity is unknown. The heart of America is clearly stated in its founding documents, which, thanks to the Christian principles guiding the Founding Fathers, established a nation grounded in the truth about the human person.

What “Stars and Strife” fails to acknowledge is that the many divisions in our country can all be explained by the same tragedy: that America has not lost its identity but rather has fallen into ignoring it.

To its credit, the film offers insights into a range of crises throughout American society. The problem is that it fails to tie them all together. In one moment, interviewees lament a political system overrun by fierce partisanship and corruption. In another, the focus suddenly switches to the evils of corporate capitalism. Before audiences can wrap their head around that, the film plunges to the cultural crisis of racism. And along the way, the ubiquity of social media receives a harsh reprimand as well.

Is this a film about politics, the economy, culture, or something uniting all three? Without a coherent narrative driving it forward, it’s hard to tell.

As much as “Stars and Strife” downplays the importance of understanding America’s identity to explain the crises, it does not completely ignore it. Baked into the hodgepodge of interviews are some nods to the country’s essence.

One interviewee mentions the importance of learning what makes America distinctive so that everyone in the nation can unite around the common purpose. Others assert that Americans have forgotten their history, the “American psyche” that propelled us to become a global superpower and emblem of hope almost overnight.

But what is so distinctive about America? What is the essence of that American psyche? A few conversations mention the signature can-do attitude and the promise of the American dream. But something deeper lies beneath all that: the moral principles upon which America was founded. Only by examining those principles does it become clear that abandoning them can only lead to the fractures we see today.

The iconic phrases of the Declaration of Independence capture not only the philosophical vision of America but also the Christian underpinnings that ground that vision. “All men are created equal.” “They are endowed by their Creator with certain unalienable Rights.” “With a firm reliance on the protection of divine Providence, we mutually pledge to each other our Lives, our Fortunes and our sacred Honor.”

Each of these phrases proclaim something essential about the American identity — precisely because they recognize a transcendent reality.

With the first statement, the Declaration bases America on the fact that the existence of all men (that is, mankind) is not random. Americans recognize that we have been created by the same transcendent power and therefore have a common transcendent purpose. This reality exposes the futility of the materialism, greed, and prejudice that afflicts American society today. 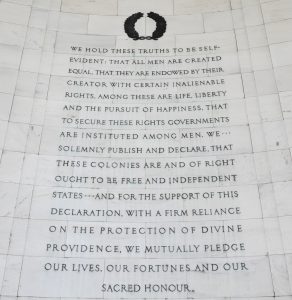 The inscription on the southwest quadrant of the Jefferson Memorial in Washington, D.C., with a passage from the Declaration of Independence. (Eduardo Ramirez Sanchez/Shutterstock)

The second phrase points out that as Americans, we know that humans possess not just any kind of equality. Again acknowledging our supernatural origin, the Declaration calls for an order of mutual respect. When humans fail to treat one another with that respect — as was the experience of colonial Americans, and as is the case in our political climate today — it is because they have forgotten to see the divine imprint in one another.

Finally, to conclude the Declaration, the Founding Fathers invoke the existence of a divine will, which guides them and makes their undertaking worthwhile, even in the face of ruin and death. The idea that God protects his creatures through his providence naturally leads to a sense of hope, which strikes down fear of the unknown and suspicion of one another. In other words, the confidence of the American spirit rests upon this assurance that if we band together and entrust ourselves to God’s will, nothing will deter us from uplifting our society.

Since its genesis, what has made America so powerful and attractive is that its identity rests upon truths as proclaimed by Christianity. This does not make it exclusive toward non-Christians. On the contrary, the same Christian principles recognize the equal dignity of every human person and promote the best conditions for a diverse human society to flourish.

But over time, as the rise of secularization has downplayed and rejected those principles, it is only natural that the main functions of our society — the political system, the economy, and social structures — have fallen into disarray. With our society’s very foundation under attack, who can be surprised that its pillars are on the verge of collapse?

Perhaps the makers of “Stars and Strife” deemed such an explanation for America’s crises too simplistic, too narrow-minded, or too unconvincing for a pluralistic audience. Or perhaps they simply did not think to address it.

Either way, the documentary suffers because of it.

“Stars and Strife” is now available for streaming.