The troubled Catholicism of Ernest Hemingway

“I have never wanted to be known as a Catholic writer because I know the importance of setting an example — and I have never set a good example.” — Ernest Hemingway to Father Vincent Donavan, in an unpublished letter dated December 1927.

Among the many surprises in Ken Burns and Lynn Novick’s six-hour documentary on Ernest Hemingway are the accounts of Hemingway’s two adult conversions to Catholicism.

Most literary scholars do not take either of these conversions very seriously and see them as pressed upon Hemingway by family, friends, and circumstances. The conventional view is that Hemingway’s true “religion” —  insofar as he can be said to have one at all — is his famous “Code”: the idea made explicit in his interviews that in order to give meaning to life, one had to live by some set of ethical principles.

But if Hemingway’s conversions were sincere — and there is little reason to think they were not — then his “code” is not based on the agnosticism of a disillusioned existentialist, but rather on the comprehensive, universal affirmation of Christianity.

Burns and Novick do not look very deeply into this possibility, even though they quote Hemingway himself as saying as much. Instead, they take Hemingway for the stoic adventurer and icon of American machismo that everybody else does.

Still, the fact that they bring up Hemingway’s Catholicism at all confirmed my own suspicions of a deeper, clear-eyed spiritual sensibility lurking behind all of Hemingway’s naturalistic plots — forcing me to reconsider everything I had previously thought about the man. That led me to two books: H.R. Stoneback’s groundbreaking work “In the Nominal Country of the Bogus: Hemingway’s Catholicism and the Biographers” (1991), and Matthew Nickel’s more recent “Hemingway’s Dark Night” (2013).

Both see Catholicism as playing a central role in Hemingway’s literary vision and moral landscape. And yet despite Burns’ penchant for pitting rival experts against one another to round out his analysis of complex subjects and people, neither Stoneback nor Nickel are cited or mentioned in his latest documentary.

This is an unfortunate omission, for part one of “Hemingway” promised a deep dive into Hemingway’s “invention” of the modern novel, which it never delivered. The episode instead turned away from the religious clues in his work to focus on his public image, war exploits, and psychological instability — all while missing that singularly under-reported and significant aspect of Hemingway’s life as a writer: his Catholicism.

Hemingway was raised in a Congregationalist Protestant home, and his first conversion to Catholicism occurred when he was a 19-year-old and volunteer ambulance driver in Italy during World War I. Two weeks into the job, he was delivering candy to soldiers on the frontlines when he was hit by machine-gun fire and more than 200 metal fragments from an exploding mortar round. An Italian priest recovered his body, baptized him right on the battlefield and gave him the last rites.

“A big Austrian trench mortar bomb of the type that used to be called ash cans, exploded in the darkness. I died then. I felt my soul or something come right out of my body, like you’d pull a silk handkerchief out of a pocket by one corner.  It flew around and then came back and went in again and I wasn’t dead anymore.” 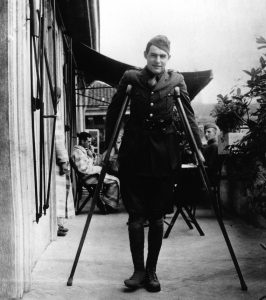 After having been anointed, Hemingway described himself as having become a “Super-Catholic.” It was a near-death experience that changed the course of his life. After the war, he went to work as a foreign correspondent in Paris. And eight years later — after his first marriage failed — he undertook a second, more formal conversion process in preparation for marriage to his second wife, devout Catholic Pauline Pfieffer.

It was at this time that Hemingway changed the title of his unpublished first novel, tentatively titled “Lost Generation,” to “The Sun Also Rises.” And writing to another friend, he declared, “If I am anything I am a Catholic . . . I cannot imagine taking any other religion seriously.”

He attended Mass (albeit irregularly) for the rest of his life and went on pilgrimages, received confession, had Masses said for friends and relatives, and raised his three sons as Catholics. Most of his novels are set in Catholic countries, and his last great hero (Santiago of “The Old Man and the Sea”) was a devout suffering servant, much in the cruciform mold of most of his heroes. When he won the Nobel Prize for Literature in 1954, he gave away the medal as a votive offering to “Our Lady of Cobre” in Havana.

Unfortunately, his subsequent divorces and additional marriages, drunken brawling, domestic abuse, poison pen letters, paranoia, megalomania, and habitual womanizing tarnished his youthful sense of himself as a “super-Catholic.” Hemingway never wanted to be known as a “Catholic writer” because he simply felt he couldn’t live up to the responsibility.

In a letter to his friend Father Vincent Donavan in 1927 just before he married his second wife, Hemingway wrote, “I have always had more faith than intelligence or knowledge and I have never wanted to be known as a Catholic writer because I know the importance of setting an example — and I have never set a good example.”

Unlike James Joyce, Hemingway didn’t renounce his faith; and unlike Flannery O’Connor, he never promoted it. He thought of himself, like many of his protagonists (Nick Adams, Jake Barns, Robert Jordan, Francis McComber and Santiago), as a man struggling to live with grace and die a good death in a violent, unforgiving world where all of us must suffer.

The first time I read Hemingway’s books, I found an irrepressible piety and sense of the sacred permeating all his naturalistic plots. Had I known then about his Catholicism, it would have clarified things — and made the books better.

Think of the ending to “For Whom the Bell Tolls” — described so movingly by the late John McCain in the documentary — or even the parody of the Lord’s Prayer in the story “A Clear, Well-Lighted Place” — only this time knowing that the author of these works knew the Bible, prayed every day, and had studied St. John of the Cross in an original Spanish edition. It changes everything.

And although Hemingway never related to the surface aspects of American Catholic life, he wrote at least one work explicitly about Christ, “Today is Friday,” a dialogue between three Roman soldiers present at the crucifixion discussing how well Jesus had died and the grace he showed under pressure.

Knowing these things does not explain away all the troubling aspects of Hemingway’s egocentric personal life — his public inebriations, domestic abuse, womanizing, and suicide, but it helps me to understand the kinds of people Hemingway admired, their motivations and ideals, and the brave, virtuous person he was attempting to become.

The Trappist monk Thomas Merton wrote a poem the day after Hemingway killed himself titled “An Elegy for Ernest Hemingway.” It contains the lines: “You pass briefly through our midst. Your books and writings have not been consulted.” In other words, as I read it, the gifts he gave us are, for the most part, still unreceived.