The many faces of St. Joseph, Christianity’s diamond in the rough

In modern churches, the statues of the steady, silent St. Joseph rarely get a second glance for their artistic merit. The faithful may gaze upon his pleasant, placid face, and bury his feet in drifts of penciled petitions, but they probably don’t swoon in aesthetic bliss.

These resin figurines, however, are just the latest (and arguably the laziest) incarnation of a saint who has undergone exceptionally dramatic transformations over the centuries.

Geniuses such as Giotto di Bondone, Raphael Sanzio, and Bartolomé Esteban Murillo applied their fertile imaginations to creating the many personas of St. Joseph: dreamer, suitor, protector, worker, just to name a few. In honor of Pope Francis’ dedication of 2021 as the Year of St. Joseph, the following is a tour of a few of St. Joseph’s many-colored looks.

St. Joseph got a late start in Christian iconography, perhaps a case of art imitating life. Early Christians emphasized the virgin birth and Christ’s divine fatherhood, so St. Joseph — ever the gentleman — stood aside, never appearing in catacomb frescoes or sarcophagi reliefs of the Nativity or the Epiphany.

Not until the fifth century and the glorious age of church construction did St. Joseph make his first appearance in the triumphal arch mosaics of St. Mary Major. This was no tentative introduction, however: He appears five times in the arch, more than any other character, including Mary and Jesus.

Despite this dramatic debut, Josephine imagery did not come into its full splendor until the dawn of the Renaissance. A seismic spiritual shift, led by St. Francis of Assisi, paid increasing attention to Jesus’ human experience, which resulted in more scenes of Christ’s infancy and consequently more of St. Joseph.

One artistic trailblazer, Giotto, crafted a stately St. Joseph, pioneering the “chiaroscuro” (“light-dark”) technique to give him greater gravitas. In the Lower Basilica of Assisi, Giotto revolutionized the Nativity scene in an image later chosen by Pope Francis for his official 2016 Christmas card. 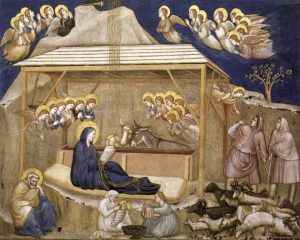 Christ appears twice in this fresco: once in the center surrounded by angels while gazing at his mother, with beams of heavenly light leading to his head, bringing a flash of the divine into the little wooden shed.

Beneath this scene, however, along the lower edge of the work, Giotto painted a second baby Jesus. Here, midwives tend to his human needs — washing and feeding — while St. Joseph gazes at him in quiet contemplation.

A notable detail is that St. Joseph’s blue and yellow robes, and his short white hair and beard borrow from the iconography used for St. Peter, the first pope. This resemblance evoked St. Joseph’s loving guardianship of Christ as a model for the pope’s care for the Church.

The Renaissance valued versatile, dynamic men, the alpha males of art history, and St. Joseph was quick to get with the times. The sacrament of marriage was on the rocks, as bigamy, cohabitation, and prostitution were on the rise due to lax mores, so St. Joseph — formerly the contemplative dreamer — stepped forward to claim his bride.

“The Marriage of the Virgin,” executed by Raphael for the Church of St. Francis in Città di Castello, united sacramental doctrine with the narrative charm that was the trademark of the 21-year-old painter.

The altarpiece, inspired by an earlier work by his master, Pietro Perugino, displays the exchange of rings front and center. The viewer stands in a privileged position (nowadays reserved for wedding photographers) directly in front of the bride, groom, and high priest. Raphael even arranges the figures in a semicircle, inviting viewers to take their place as witnesses to this sacred event. 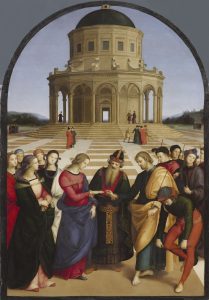 “The Marriage of the Virgin,” by Raphael Sanzio, 1504. (Wikimedia Commons)

Mary and Joseph (younger than in Giotto’s version) extend their hands toward each other, underscoring the necessity of consent in marriage, while the priest brings their two hands together conferring sacramental grace. The slight tilt of his head adds emphasis to the words of the marriage vows: “What therefore God hath joined together, let not man put asunder” (Mark 10:9).

Witnesses gather on either side of the couple, the young men breaking rods over their knees in accordance with an apocryphal story where Mary’s many suitors were each given barren branches, but Joseph’s miraculously blossomed, a sign of divine selection.

Three delicate lilies can be seen blooming from Joseph’s rod. Behind them the pavement converges in perfect perspective toward an open door in the temple where one looks out on an endless horizon — here Raphael highlights the perpetual nature of the sacrament, as does the round temple, symbol of unity, indissolubility, and eternity.

Post-Reformation Europe looked to St. Joseph as a model of balancing the active and contemplative life, with St. Teresa of Ávila spearheading this renewed devotion by dedicating 12 of her 17 new monasteries to him. Father Jerónimo Gracián, Teresa’s spiritual director, wrote a new hagiography for the saint in 1597, proposing that St. Joseph was like Jesus in “countenance, speech, and physical constitution.”

In this era, a young, vigorous St. Joseph emerged from the brushes of Francisco de Zurbaran, Doménikos Theotokópoulos, most widely known as El Greco, and especially Murillo, who dedicated almost as many easels to Jesus’ father as he did to the Immaculate Conception of his mother. His “St. Joseph and the Christ Child,” painted for the high altar of the Capuchin Church of Seville, is one of the more striking versions. 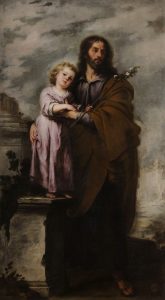 In the 6-foot-6 canvas, St. Joseph towers over the viewer, while Jesus stands at the center, robed in a mauve tunic, the color choice meant to evoke his human nature. Perched on a battered stone slab, reminiscent of a pagan altar with a broken column of an ancient temple protruding beside him, Jesus rests his luminous head against St. Joseph’s shoulder.

The strong, handsome St. Joseph, resembling the adult Christ, cradles the boy protectively as he looks into the distance to ward off potential threats. This virile iconography soon crossed the Atlantic to introduce St. Joseph as the patron of Mexico.

St. Joseph’s patronages grew exponentially: He watched over the moribund, the Chinese missions, and the universal Church, and painters reveled in the new artistic challenges that each title brought, leading to the last great spate of Josephine iconography: Patron of Workers.

Pope Leo XIII, alarmed at the global spread of socialism, held up St. Joseph, who “passed his life in labor, and won by the toil of the artisan the needful support of his family,” and pleaded with Catholics to “trust not to the promises of seditious men, but rather to the example and patronage of the Blessed Joseph.” (“Quamquam Pluries,” 4-5).

As Pope Leo was penning those words, artists were already at work reimaging St. Joseph as a worker. James Tissot’s lovely watercolors captured the artisan in his shop, and François Lafond depicted young Jesus learning his father’s trade, while Modesto Faustini was frescoing a chapel in St. Joseph’s honor in the renowned sanctuary of the Holy House of Loreto. Faustini’s “Holy Family” from 1890 dazzles with this neo-Gothic gilding, but beyond the glitter lies the real gold.

A simple space with a high, vaulted ceiling and terracotta floors shows signs of age in the scratched plaster, iron tie bars and vegetation sprouting in cracks. The one opulent touch is the throne of the virgin, backed by a green tapestry, carved, and inlaid with the finest marquetry of the woodworker’s art. 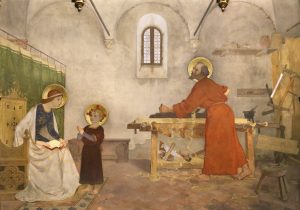 She leans forward, book in hand, speaking to the Christ Child, who stands on a woven rug praying with his mother. St. Joseph’s worktable occupies the bulk of the space, with tools, planks, and spartan furnishings festooned with shavings from the carpenter’s lathe.

St. Joseph is hard at work, barefoot on the brick floor, his whole body engaged in planing wood, yet his face, absorbed as he watches his wife and son, reveals peaceful adoration. He gives himself over to toil, so his little family can glorify God, and in doing so, confers dignity upon human labor and sacrifice.

Now, in this age of pandemic, where unemployment and lockdowns have shattered so many families, closed churches have tested the faith of the faithful, and gender ideology undermines the meaning of male and female, Pope Francis has told us to “Go to Joseph.”

It’s a timely message and an invitation to explore the many facets of Scripture’s most precious diamond in the rough: St. Joseph.