Easter through her eyes: Art that exalts the women of the Resurrection

From the very beginning, Christianity challenged the pagan world in many ways, not least in its vision of women. Christ and his apostles were male, the decision-makers around Jesus’ condemnation and death were men, and yet it was the women of the Resurrection who brought the light of hope and first proclaimed the good news. The artistic potential of these feminine protagonists of the history of salvation was not lost on artists who, over 18 centuries, produced myriad representations of the unique role assigned to Christ’s mother and female friends.

During this triduum, overshadowed by the recent wounds of pandemic, poverty, and war, we might be able to rediscover the virtue of hope through three works depicting the “feminine genius” of these holy witnesses. Michelangelo’s “Pietà,” William-Adolphe Bouguereau’s “The Holy Women at the Tomb,” and Lavinia Fontana’s “Noli me tangere,” are visually quite different, yet each exalts the dignity and courage of the women closest to Christ.

Michelangelo’s moving Pietà might seem distant from the Resurrection, yet it radiates hope even in this mournful moment. Sculpted in 1500, the Pietà was the first Italian interpretation of Mary holding Christ before burial, a subject pioneered in Germany in 1300.

Michelangelo radically transformed the German model, which underscored the suffering of Christ through meticulously carved open wounds with drops of crimson blood into a monumental example of dignified pathos.

Jesus’ beautifully carved body, derived from classical sculpture with its perfect proportions, bears few marks of his torments and its lifelessness is expressed through a few poignant details of limp flesh and sagging muscle. The beauty of Christ’s body forces the viewer to reflect on Mary, who knew her son as God from the beginning — his divine beauty was never hidden from her.

We are invited to imagine her dual loss of both her son and the man she knew to be her Savior. Yet Mary doesn’t despair, she gazes downwards with the same expression and youthful features as the first moment when she said “Yes” to God, offering herself as the handmaiden of the Lord.

The treatment of the marble, an exceptional display of skill, reveals the underlying meaning of the work. Mary was beribboned with shadows: around her robes and veil, and in the shallow niche where it was originally placed.

The darkness of despair appears to encroach on all sides, yet Mary remains focused on Christ, carved in smooth planes, and polished to a reflective surface. Her eyes remain fixed on the light of Christ even in the heart of darkness, the secret and the substance of her hope.

Nineteenth-century painter William-Adolphe Bouguereau produced a few, deeply personal, religious works, inspired by the loss of his wife and four of his five children. Yet through his grief, Bouguereau found hope and solace while meditating on the women who had suffered through the death of Christ. 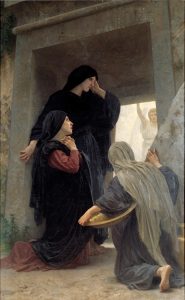 William-Adolphe Bouguereau’s “The Holy Women at the Tomb.” (Wikimedia Commons)

In his 1890 “Three Marys at the Tomb,” Bouguereau evokes the silence of the earth-shattering event of the Resurrection. The soft lights indicate dawn, when three women have come to the tomb of Christ. Even their heavy draperies seem to mute sound. The noise of the condemnation and crucifixion has ended — these mourners seem like a footnote to the story.

This is no ending, however, but a beginning. Our eyes follow the figures to the doorway where the first woman, her back fully toward us, alerts us that something is happening with the swift turn of her head and angular pose.

We lean in to look more closely at the next woman who is kneeling at the doorway. Her face and limbs are suffused with light, her clasped hands and parted lips visible. Following her gaze, we perceive an angel, faint in the opalescent light glowing from the tomb, as he says, “He is not here; for he has been raised.” (Matthew 28:6) Hope surges in our hearts alongside these women.

The last figure, most likely the mother of God, stands closest to the opening of the tomb, swathed in a cobalt robe that resembles a curtain opening to reveal the awesome sight. As she clutches the wall, her face appears overwhelmed with understanding. Our gaze moves from the charity of the first woman carrying her vessel for ablutions, to the hope of the kneeling figure, and our eyes settle on Mary, whose steadfast faith has not been in vain.

In Lavinia Fontana’s painting, Christ’s encounter with Mary Magdalene in the garden, recounted in John 20, is one of the most empowering Gospel stories for women. Distraught to find his tomb empty, Mary Magdalene does not recognize Jesus standing before her, mistaking him for a gardener.

When he speaks her name, she sees, and reaches out. Jesus responds by saying: “Do not touch me [Noli me tangere] for I have not yet gone to my Father.” From this moment, Mary Magdalene becomes the first witness of the Resurrection, and is the one to inform the apostles of the great miracle. 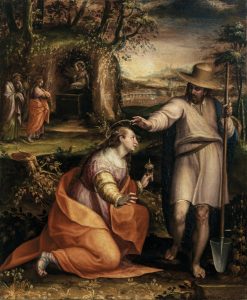 In 1581, 29-year-old painter Fontana received a commission to paint this scene, fruit of her association with the Dominican Order of Preachers, who had adopted Mary Magdalene as their patron saint of preaching. The subject matter of Jesus’ choice to reveal himself first to a woman, making her a preacher to preachers, inspired Fontana, who would become the first woman to paint a public altarpiece.

Her composition, with Jesus and Mary in the foreground and a secondary scene of the holy women at the tomb in the background, underscored the singular honor given to Mary Magdalene. Fontana depicted Jesus in a gardener’s costume complete with hat and boots, but cleverly concealed a cross between the staff of the shovel and the tree branch. Fontana’s personal innovation was the close relationship between Mary Magdalene and Jesus. Where other artists depicted Christ walking away from Mary Magdalene, Fontana chose to show Jesus directly engaging her, rendering Mary’s face visible to viewers.

Christ’s fingertips almost graze Mary’s brow, as he looks lovingly at her. Mary’s rapturous gaze is fully visible to the viewer, and her hand, turned toward us, suggests that she will soon turn to share the joyful news with us.

While merely three drops in the ocean of Resurrection iconography, these works reveal how these female witnesses inspired past generations and challenge our own to think about how they can guide us in our present day.