In 2006, Pope Francis said, “Great artists know how to present the tragic and painful realities of life with beauty.” The Holy Father has frequently discussed his profound connection to various works of literature, music, art, and cinema. “I owe my film culture especially to my parents, who used to take us to the movies quite often,” he said in a 2013 interview.

The pope comes from a long line of supreme pontiffs and Catholic leaders who have made great strides in the collection and preservation of cinema’s finest artworks.

The Vatican film library, which just celebrated its 60th anniversary in November 2019, was founded by Pope John XXIII “with the aim of collecting and preserving films and recordings of television programs on the life of the Church.”

Pope Leo XIII, the first pope to be recorded on film (the then-octogenarian also blessed the camera), and Pope Pius XII are just two of the pontiffs that appeared in front of the camera. The archive has grown to house more than 8,000 titles, including commercial films “of artistic value and worthy of note,” like “Schindler's List,” gifted by director Steven Spielberg himself.

The library, a member of the International Federation of Film Archives, includes a study center, special film storage cellars, and a screening hall in a former chapel that has been host to former popes.

St. Pope John Paul II screened “Gandhi” at the theater prior to a trip to India, and directors such as Liliana Cavani, Roberto Benigni, and Martin Scorsese. Most recently, Terrence Malick screened his new film, “A Hidden Life.”

The movie is based on the real-life story of World War II-era conscientious objector Franz Jägerstätter, who was put to death at age 36 and later declared a martyr and beatified by the Catholic Church.

In the last of a three-part series, we take a final look at the Vatican’s “Best Films” list. Established in 1995 during the 100th anniversary of cinema, the Vatican’s list was assembled by a group of film experts who pinpointed a total of 45 movies, categorized into three parts: religion, values, and art.

Here, we focus on two of the 15 films that illuminate the art of cinema: one, a European classic of international acclaim, and the other a children’s film that adults can appreciate, too, involving over 1,000 artists and technicians and 500 animated characters.

As we enter a brand new decade, 25 years after the Vatican’s list first appeared, it remains to be seen if the Vatican Film Library or Dicastery for Communication will issue an updated list for the new millennium that has seen incredible technological advances.

But the Vatican’s 1995 list remains a gift for even the most ardent filmgoer: an essential primer in the beauty and emotional power of cinema.

The Vatican chose a film by a director of cinema, opera, and theater for one of its most evocative selections. Luchino Visconti’s lush historical epic “The Leopard,” set during the Italian unification (“Risorgimento”) of the mid-19th century, is a wistful look at one aristocratic family’s struggle with their prominent status in the past and their uncertain future.

Burt Lancaster’s Prince Don Fabrizio Salina grapples with his faith and mortality amid the flux of Italy’s political climate. He views his bloodline as “the leopards, the lions,” while others are mere “jackals and sheep.”

Unencumbered by his family’s hesitance, the prince’s ambitious nephew Tancredi (Alain Delon) finds his place at the top of the democratic resistance alongside the nouveau-riche Angelica (Claudia Cardinale), daughter of the opportunistic town mayor.

The prince knows the union will help salvage the last vestiges of his family’s noble clout and despises every moment of it, despite his own tortured fondness for Angelica.

“The Leopard” was a landmark work of color cinematography, featuring dramatic light and sumptuous settings that overwhelm the senses. The filmmaker’s painstaking attention to detail is both seen and unseen.

Period-appropriate pieces like embroidered handkerchiefs were never even visible on camera. Every room in Visconti’s film is a jewel. Portraits of the family’s ancestors watch every drama play out between lavish, wallpapered halls.

These opulent touches are juxtaposed with less savory details that evoke the “stench” and privilege of wealth, such as the brimming chamber pots in one scene that litter a mansion floor.

In another scene, after the family makes a long procession to the local church, they sit covered in dust from the journey. Their faces are ashen like ghosts, portending their own social demise. Visconti, himself, joined the Italian Communist Party after World War II, yet was born into a noble family of his own, and you can sense his personal conflict during these moments.

The film’s crowning achievement is a 45-minute ballroom scene that is breathless in its decadence and offers the prince a farewell moment where he relives his former glory during a single dance.

He leaves the brash affair more melancholic than ever and genuflects, not before God, but before the night stars, calling to them just before he vanishes into the night. It’s a somber, poetic end for a fallen leopard and lion. 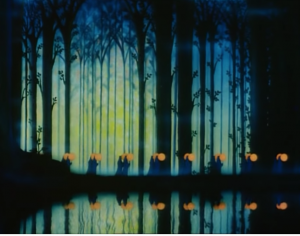 The recent release and growing popularity of Disney+, the Walt Disney Company’s subscription VOD streaming platform, makes for a ripe time to revisit some of the studio’s animated classics, like Vatican list honoree “Fantasia.”

Originally titled “The Concert Feature,” the 1940 film pairs a series of lively, animated segments with iconic pieces of classical music arranged and recorded with conductor Leopold Stokowski and the Philadelphia Orchestra (performed on the screen by local musicians Disney studio employees).

One of the movie’s most memorable moments includes dueling compositions: “Night on Bald Mountain” by Modest Mussorgsky and “Ave Maria” by Franz Schubert. In a “struggle between the profane and the sacred,” the devil Chernabog summons dark spirits that are banished back to their graves when the golden light of dawn appears and a group of monks process into a cathedral singing the beloved Marian hymn.

“What you’re going to see are the designs and pictures and stories that music inspired in the minds and imaginations of a group of artists,” master of ceremonies Deems Taylor tells us at the start of the film.

In a 1937 essay, Walt Disney wrote that “action controlled by a musical pattern has great charm in the realm of unreality.” He hoped “Fantasia” would be the film to break tradition and prove what kind of artistry animated movies were truly capable of.

The film initially saw an inferior critical and box office response, but gained psychedelic appeal in the 1960s, which helped boost its classic status for future generations. In an unpublished 1955 interview with journalist Peter Martin, Disney said, “Every time I made a mistake is when I went in a direction where I didn’t feel the thing actually. And I did try to be a little smarty-pants.”

Recently, Disney announced that it was developing an unnamed project based on “Fantasia” for Disney+, proving that the fantastical film still endures.