New film about C.S. Lewis’ struggle to believe has something for everyone

The man remembered when illness and death first cast a shadow in his life. It was a toothache, of all things, and he was calling for his mother. He became distressed when she didn’t come.

“That was because she was ill, too; and what was odd was that there were several doctors in her room, and voices and comings and goings all over the house and doors shutting and opening,” wrote the great Christian author C.S. Lewis years later. “And then my father, in tears, came into my room and began to try to convey to my terrified mind things it had never conceived before. It was in fact cancer and followed the usual course.”

The death of Lewis’ mother caused him to lose the little faith he had. His prayers had not been successful, and so he did not bother about God for another two decades. He was the grandson of an Anglican minister, the great-great-grandson of a Church of Ireland bishop, but none of that mattered.

Lewis later recalled (to great shame) that he had made his first Communion (in the Church of Ireland) without any faith in Jesus. He was appalled at his earlier lack of faith after he had found God — or, rather, after God had found him.

The young man served in the trenches in World War I and was the exception to the old adage that there are no atheists in the foxholes. He was a brilliant student at Oxford after the war, and there God gave him a set of friends, including the novelist and scholar J.R.R. Tolkien, who helped him accept the Christian faith (but never quite succeeded in converting him to Catholicism). 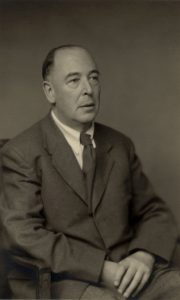 Author C.S. Lewis in a 1955 portrait by Walter Stoneman. (CNS/courtesy of the National Portrait Gallery, London)

He went on to become a Cambridge professor and the author of more than 30 books, including the well-known “The Chronicles of Narnia,” “The Screwtape Letters,” “Mere Christianity,” and other classics of modern apologetics. During World War II, he broadcast inspirational Christian sermons on the BBC. The lonely, disappointed boy grieving for his mother became one of the finest Christian writers of the 20th century.

It’s a conversion story that serves as the basis of a new movie, “The Most Reluctant Convert: The Untold Story of C.S. Lewis,” which began showing in select theaters in November. The film will serve both as an introduction to those who have never read him, and an enjoyable refreshment for those who know and love his writings.

The movie originated from a one-man play written and acted by Max McClean, who plays the older C.S. Lewis in the movie. McClean’s voice and demeanor convey the richness of Lewis’ writings with gravitas. He speaks what seem to be actual quotes from the works, but in a way that is quite natural. Lewis is telling us the story of his conversion.

Switching from a one-man play to a movie with other actors required some ingenuity, and the production is extremely clever. There is a younger Lewis, played by Nicholas Ralph, and his older self witnesses key events in the story of his conversion. It reminded me of Scrooge seeing his younger self with the ghost of his past in “A Christmas Carol.” It is as if we have been invited to accompany Lewis for a rendezvous with the history of his own soul, and we can see his bemused reactions to the distance he has traveled.

The screenplay is subtle, and the more you know about Lewis the more you can relish the references to books and authors like G.K. Chesterton. Thankfully, however, understanding his intellectual legacy isn’t necessary to appreciate a production that involves the viewer in the young Lewis’ struggle about faith on an emotional and personal level.

For a while, Lewis was what he called a materialist, denying the existence of God and holding for a purely mechanical-chemical explanation of human behavior. His friends would point out to him that if our lives were just a question of chemical reactions, then there would be no nobility, no spiritual values, no real meaning.

I was reminded of a man making a Fifth Step in the Alcoholics Anonymous program at my parish, who said that he believed in no higher power (something really impossible in AA). We are the accident of molecules which come together, he said. He had spoken to me about his son, however, about how he was anxious to get custody of the child, and how it was the most important goal in his life to raise his boy.

“And is that just about molecules?” I asked him. Different people have different religious experiences that point to the transcendent in the particular circumstances of their lives. This man’s love for his son was such an experience, even if he didn’t know it. Lewis was convinced by his friends because of aesthetic and idealistic values and then became what he called a theist. There was a Creator God but there was no way we could be in relationship with him.

He said he admired Jesus as a teacher, and Tolkien and another friend pointed out that we either take Jesus at his word or we reject him. He was either the Son of God, as he claimed, the source of salvation for all, or he was a madman. Jesus demanded all or nothing.

McClean narrates the scene of Lewis’ conversion at Oxford, quoting from the writer’s splendid partial autobiography, “Surprised by Joy”: “You must picture me alone in that room in Magdalen, night after night, feeling, whenever my mind lifted even for a second from my work, the steady, unrelenting approach of Him whom I so earnestly desired not to meet. That which I greatly feared has at last come upon me. In the Trinity Term of 1929 I gave in, and admitted God was God, and knelt and prayed: perhaps, that night, the most dejected and reluctant convert in England.”

There are many young people who think that they are atheists today. My counseling of drug addicts and alcoholics leads me to believe that some are merely agnostic and most have problems with God because they are prisoners of resentments and a great deal of emotional pain. I hope some of them have a chance to see “The Most Reluctant Convert.”

The last chapter of “Surprised by Joy” is titled “Checkmate.” May our prayers support all those who are trying to talk themselves out of belief so that they let God win.

Pope receives proposal to declare St. Irenaeus a doctor of the church