This phrase will strike many as familiar, perhaps as a bumper-sticker slogan or as a recurring line in homilies and other faith-formation talks.

However, many people might not know the origin of this popular statement, and specifically the man behind the message. “Pray: The Story of Patrick Peyton,” delves into that man’s story.

The recent documentary from Family Theater Productions walks viewers through the life of a priest who journeyed from a small Irish town to the world stages of Manhattan, Hollywood, and beyond, drawing millions of people to hearken his preaching on family prayer. 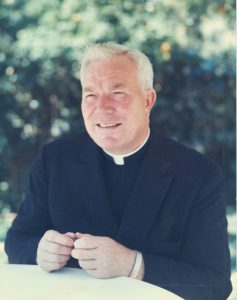 Father Patrick Peyton (1909-1992), an Irish immigrant who was ordained a Holy Cross priest in 1941, started and spearheaded Family Rosary, a movement dedicated to promoting peace by encouraging families to pray regularly at home together. As the interviews throughout the 71-minute film demonstrate, this simple message has resonated with countless people, some of whom attribute things like the survival of their marriage and even unexplained physical healings to Father Peyton’s intercession.

Throughout the film, viewers learn of the hundreds of radio episodes, television broadcasts, and “Rosary Rallies” that Father Peyton led between the 1940s and 1960s, some of which involved Hollywood’s biggest celebrities.

The sight of stars such as Bing Crosby, Frank Sinatra, Ann Blyth, and Jimmy Stewart championing a message of prayer and family unity is enough to leave modern audiences scratching their heads. Thanks to the rapid pace of cultural secularization since then, such a popular media campaign of evangelization would seem inconceivable today.

So if Father Peyton’s time was so different from our own, how relevant is a movie about him in 2020?

In a phone interview, Father David Guffey, CSC, national director of Family Theater Productions (which Father Peyton founded) and executive producer of “Pray,” addressed this and other questions.

Sophia Martinson: This is not the first production on Father Patrick Peyton and the Family Rosary campaign. Other videos, EWTN episodes, and books have retold his story. What was the motivation to create a feature documentary film about this particular priest at this point in time?

Father David Guffey: When I started at Family Theater Productions in 2008, we had a room in the basement that we call “the vault.” It was filled with film canisters, videotapes, and audio recordings. Many of those contained shows [with Father Peyton] that were broadcast, but there was so much in the vault that was rally footage and interviews with Father Peyton that never made it to air.

As we were digitizing our film and audio assets, there were so many things there that seemed so relevant for today. It seemed like the voice of Father Peyton was a voice that needed to be heard in the Church today: about finding unity with people through prayer, finding hope, and bringing families together. At the same time, the cause [of canonization] for Father Peyton seemed to be advancing … so it seemed like there would be a renewed interest in [him] because of that.

Martinson: Some might argue that the more faith-friendly ambience of mid-century Hollywood and American culture made Family Rosary easier than it would be today. Is there something about the past that needs to be reclaimed in order to be as effective as Father Peyton was in evangelizing his society? 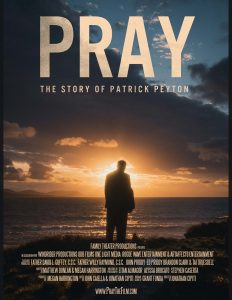 Father Guffey: I think the 1930s, ’40s, and ’50s were the golden age of Catholics in media. But what caused that? The makers of media knew that Catholics constituted an audience that wanted a certain kind of content. And so the studios were supportive of making that kind of content for Catholics and other people of faith. What happened in the 1950s, ’60s, and ’70s was a fragmentation of audiences and culture. Hollywood really lost the sense that people of faith were an audience, so they sort of let that audience become isolated on its own on stations that were specifically religious.

In my mind, that began to change with “The Passion of the Christ” in 2004. That film came out of nowhere. No one in Hollywood expected it. It took about three or four years for the awareness to catch on, but what you’ve seen since that film is a steady stream of faith-inspired stories that have come to the big screen and the small screen. More and more, you’re seeing stories of faith that are being included in mainstream television and other media. So I think we’re in a great time because we’re recognized as an audience again.

Martinson: That certainly seems to offer hope. Still, given the differences between Father Peyton’s time and our own, how should we go about working to spread a message of peace and faith amid our own cultural climate?

Father Guffey: Father Peyton believed that the answer to the world’s problems was prayer, and prayer together. And that, I think, is still true today. If we had people who were formed in families with prayer, if we had people that went to work and into the public square with their lives rooted in love and prayer, that would change the world.

Martinson: What are some of Father Peyton’s qualities that you think are the most important for viewers today to emulate in their own evangelization efforts? 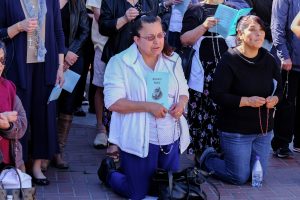 People pray the rosary during an Oct. 8, 2016, eucharistic procession and rally in San Francisco. The rally was restarted in 2011 on the 50th anniversary of Holy Cross Father Patrick Peyton's rosary crusade in Golden Gate Park in 1961. (CNS photo/Dennis Callahan, Catholic San Francisco)

Father Guffey: First of all, everything Father Peyton did was deeply rooted in his own personal prayer. But once something became clear to him as a call, then he went after it. He was relentless. Frankly, he was kind of a shy guy. Members of [the Congregation of the] Holy Cross who knew him said he was not a gregarious person. But the sense of call drove him outwards towards others.

The other thing is that he always involved other people, Father Peyton gets a lot of the credit for the radio shows and the rallies that he did and, but he had a huge team of people that worked behind him. And even on the radio show, which first brought him to nationwide fame, he had some great Hollywood writers and producers that were part of the initial team. All those qualities I think are important for us to remember today.

Martinson: What do you think is the significance of Father Peyton’s specific emphasis on family prayer?

Father Guffey: Well, Father Peyton believed that the family was the most important social unit of the Church. In fact, he called the family “the domestic church.” It was so important to him that during Vatican II, he flew to Rome and spent several months there lobbying the bishops in the council to include the phrase “domestic church” in the Vatican II documents — which they did, in the Constitution of the Church, in part because of his prompting.

In 2015, our parent organization, Holy Cross Family Ministries, did a research project on family prayer with CARA, the Center for Applied Research in the Apostolate. The good news we found was that most Catholic parents prayed, but a very small percentage prayed with their family. When we asked why, some said they didn't know how to get started. They didn't have a model of it growing up in their own home, and they were intimidated. So what we also wanted to do with the film was model to people how other families started praying together and what prayer had meant for them in their lives.

Martinson: When Father Peyton began his Family Rosary campaign, the world faced the crisis of World War II. Today, it faces the crisis of a global pandemic, on top of widespread political unrest. How do you hope Father Peyton’s message will resonate with and help people amid these modern crises? 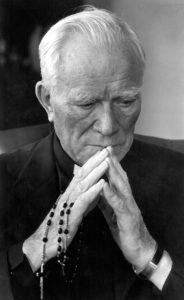 Father Guffey: Amid the crises of the world today, the answer is to turn to God. I believe what Father Peyton says, that to do that with other people is key. And then a sense of peace, hope, and confidence emerges. How many people tell us that prayer is their source of peace and hope in these times! It’s important that we share that gift with others, especially those in our family.

Martinson: The U.S. Conference of Catholic Bishops recently announced a “Rosary for America” livestreamed event on Oct. 7, the feast of our Lady of the Rosary. How do you think this event might draw from and also build upon the message that Father Peyton spread and that you’re trying to promote through this film?

Father Guffey: Father Peyton would have loved this event. He loved it when people got together to pray the rosary, for a couple of reasons. One, praying the rosary is a way to go to Christ through the eyes and heart of Mary.

And third, there’s just the power of people praying together. Oh my gosh, do we need that in our times! We need people unified by something bigger than themselves, bigger than the troubles and concerns of our day.

“Pray” is scheduled for release in theaters Oct. 9.