“[A]ll of a sudden it seemed as though everything I had done up to then meant absolutely nothing. … Even my beloved music, the piano I played, all seemed to have lost their appeal.”

That was saying something, as Mary Lou Williams had done a lot. Acclaimed pianist and composer for Duke Ellington and Benny Goodman, she played her way through every era of jazz, from the 1920s through the 1950s. Although she didn’t always make a lot of money, she had enormous talent and her life had been, in one sense, a string of successes.

That is, however, only a partial history. The full one has to include her incredible conversion story.

At age 44, Mary Lou Williams knew suffering well. She was born in the South in the time of segregation, and at the age of 3, her family moved to an all-white neighborhood in Pittsburgh, where her new neighbors threw rocks through her family’s front windows.

She dealt with both the pain of infertility and trauma after an abortion. She struggled to gain the rights to her music that had been stolen by other musicians. One of the greatest sorrows, though, was watching her fellow musicians, many of them close friends, succumb to alcoholism and drug addiction.

As she traveled Europe playing different clubs, jazz was fading from the mainstream, making it harder to draw large audiences, and Williams refused to sacrifice quality for popularity.

She still had steady work, but she was paid little, and she was sinking into a deep depression. Finally, she walked off the stage at a Paris café, leaving behind her paycheck, with no plans to use her prodigious talent again.

“I felt I had absolutely no one to turn to, no one to talk my troubles over with. I grew bitter at life, at people…” she said of this time. “I walked around as though I were in a fog. I met people who spoke but I didn’t see them. … I was searching for something I did not see and I did not know what it was. But I know I was searching for something.”

Williams returned to New York, where she continued to search. She began living a life of intense self-sacrifice and meditation. She gave away her expensive clothes. She spent hours praying, famously compiling a list of more than 900 names, offering up a personal prayer for every individual.

She gave away her money to anyone who needed it, no matter how little she had. She opened her home to whoever wanted to stay. She took in people struggling with addiction and tried to keep them sober.

And although she had been playing piano since she was a child, now she played only if she had no other way of getting money:

“Music had left my head, and I hardly remembered playing,” she said. She felt that she was finished with jazz forever, saying, “I got the feeling that I would never play jazz again nor would I return to my old life, although people were offering me all kinds of good-paying jobs, all of which I turned down.”

It wasn’t just that jazz had left her head; she wanted to stay away from an old life she was starting to see as sinful, a life that seemed to have led her down a path of suffering.

She discovered Our Lady of Lourdes Church in Harlem, which, conveniently for her, left its doors open all day. She began praying there. One day, she bought a rosary and asked a friend who used to be Catholic to teach her the prayers.

And music filled her head again: “I’d go down and meditate in that church and hear some crazy arrangements. They come so fast I can’t write them.” Biographer Linda Dahl writes that Williams’ notebooks from that time are full of notes for spiritual pieces, “blending jazz with spiritual intent.”

She met two priests who would become extremely influential in her life. A friend who was considering becoming Catholic introduced her to Father John Crowley, who used to be a saxophone player. Crowley was afraid that in opening her home, Williams was putting herself at risk, and urged her to stop trying to reform people struggling with addiction.

She didn’t listen to him, until he showed her that her talent for playing did not have to be separate from her faith: “Mary, God wants you to return to the piano. You can serve him best there for that is what you know best,” he told her.

Soon she met another priest and jazz fan, Father Anthony Woods. He also encouraged Williams to be more cautious in her service to others and to return to music, and taught her how to pray for her 900 people without naming each one.

Williams grew very close to Woods, and he became her instructor for religious education and her spiritual director. Williams had thought that jazz was something sinful, something that she had to leave behind in order to make a new life. Now, she was starting to see it as another way of praying for her 900 names.

Williams began playing again, to critical acclaim. Something new was happening in her art; her experiences in the last couple of years had changed the way she saw jazz, suffering, and spirituality. 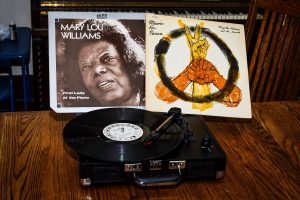 Things were different in the music world, too. As biographer Tammy Kernodle explains, Williams watched as gospel music “moved into new [secular] territory,” and the question arose, “Why not jazz? If gospel could take some of its traits from the secular, why couldn’t jazz model itself on the sacred?”

She started with a hymn to St. Martin de Porres, “Black Christ of the Andes,” which she originally titled “Music for Disturbed Souls.” She would go on to compose three jazz Masses, one of which would be played at St. Patrick’s Cathedral in New York.

Williams was moving into new territory. She would have to defend jazz’s place in sacred music against many people who believed that jazz was sinful. Not only were many Catholics suspicious of jazz liturgy, but there was also a movement within black Protestant churches against sacred jazz.

Writer William Banks had scathing thoughts on the subject: “Say what you will, a tree is judged by the fruit it produces,” he wrote. “And the jazz tree has wormy, rotten fruit, legal scrapes, divorces, alcoholism, dope and nicotine addiction … these are some of the fruits.”

Williams was adamant that these things were the result of the people, not the music, and she was intent on saving jazz.

Williams herself explained it this way: “The ability to play good jazz is a gift from God. This music is based on the spirituals — it’s our only original American art form — and should be played everywhere, including church. Those who say it shouldn’t be played in church do not understand they are blocking the manifestation of God’s will.”

Williams became a pioneer of sacred jazz. And though her fight to include jazz in Catholic liturgy would often be a lonely one, it encouraged her to keep developing her philosophy of the goodness and spirituality of jazz.

As Williams’ popularity grew, she began to speak on jazz at churches and schools. She designed an illustration of a tree, which symbolized the history of jazz, for use at her lectures. The bottom of the tree is marked “suffering,” and its roots reach deep into the ground, implying not only that jazz comes from suffering but that it can never be separated from it.

Up from suffering grows a sturdy trunk, which is marked, in ascending order, for different stages in the development of jazz, beginning with the spirituals.

After the spirituals come ragtime, then K.C. [Kansas City] swing, and finally bop. The blues, instead of being its own era, run alongside the trunk, an integral part of each stage. Off to the side hang a couple dead branches, marked things like “exercises” and “commercial rock.”

But bursting from the top are branches full of leaves marked for different jazz geniuses, including Duke Ellington, Charlie Parker, and Fats Waller.

Jazz, she believed, was something for the whole person, for the mind and the heart. It was accessible to all, but most importantly for the people Williams termed “disturbed souls,” those who were suffering.

Williams believed that it was “the suffering that gives jazz its spiritual dimension. ... Only out of suffering is a true thing born.”

It was that realization that transformed her vocation.

Kernodle writes that, “Mary’s motto became ‘Jazz is healing to the soul,’ a belief she elaborated upon in her diary, in essays, and even in broadsheets that decried the polluting effects of commercialism on jazz music and called for a return to the strongly spiritual roots of the music.” Her playing was more than a job, more than commercial: It was an act of prayer.

“I am praying through my fingers when I play, …” she said in an interview. “I get that good ‘soul sound,’ and I try to touch people’s spirits.”

In this way, she could bring the healing power of prayer into the secular world: “There’s not enough prayer anymore. That’s why we need jazz. It’s something from the mind, to the heart, to the fingertips.”

She had worried about the polluting effects of jazz clubs and the people who frequented them, but she found a way to sanctify the spaces.

Just as jazz began in suffering, her conversion grew out of a life that had more than its share of pain. She converted to a religion that acknowledged suffering at its center.

“This talent I have is to help people, period,” she wrote, “Yet I have faith that jazz is strong, the roots are deep. We must rid ourselves of evil by becoming charitable. SING OUR SOULS.”

Mary Lou Williams played and prayed for anyone who could listen with their ears and hearts, but especially for the tired, disturbed souls.

Brave ideas and blasphemy in ‘The New Pope’

A catechism of stone