Looking for God from Oran to Wuhan

When a deadly disease decimates the French Algerian city of Oran, a priest takes to the pulpit and tells his parishioners why they must suffer: “You deserved it.”

Father Paneloux, SJ, doesn’t mean that they refused to wash their hands or neglected to engage in social distancing. He means that they took God for granted: “Too long this world of ours has connived at evil, too long it has counted on the divine mercy, on God’s forgiveness,” he says. “And so, God’s light withdrawn, we walk in darkness, in the thick darkness of this plague.”

Algerian-French philosopher Albert Camus placed this scene about a third of the way through his 1947 novel, “The Plague.” Already a modern classic, “The Plague” suddenly has assumed an unnerving relevance in the age of the coronavirus (COVID-19), as readers struggle to make sense of what’s happening and why.

Great books have a way of speaking across generations. Readers in 2020 have turned to several standbys: “A Journal of the Plague Year,” an 18th-century blend of truth and fiction by Daniel Defoe; “The Masque of the Red Death,” an eerie short story by Edgar Allan Poe; and “Blindness,” a 1995 novel that helped Portuguese writer Jose Saramago win the Nobel Prize in Literature.

Yet Camus may have given us the best old book for our confusing new times, a tale that forces hard thinking about the sources of human suffering as well as the ways to respond to it.

The story starts with a step. Departing his office, Dr. Bernard Rieux “felt something soft under his foot.” It was a dead rat on the staircase.

Rieux kicks the rat aside “without giving it a further thought.” Moments later, however, he reports the rodent to the building’s concierge, who is perturbed: “There weren’t no rats here,” he insists.

When did you first hear the distant early warning sound of the coronavirus? (I dimly recall reading a brief account of a strange sickness in China.) Did you have any idea of what it portended? (Nope, and neither do Rieux or the concierge.)

Soon the dead rats are everywhere in Oran, a commercial center on the shore of the Mediterranean Sea. They have brought the bubonic plague.

The sickness spreads. People die. The government locks down the city. Nobody can come or go. The hospitals are overwhelmed. The ailing go into quarantine (a word that derives from the Italian “quaranta,” which means “40,” providing a biblical rationale for the traditional number of days the ill would live in isolation).

Officials study graphs, looking for signs that the “long rising curve had flattened out.” There’s no mention of shortages of face masks or toilet paper, but the drugstores run out of peppermint lozenges because a popular myth holds that they prevent the contagion.

Worst of all, the victims don’t know how long their plight will last. “Ah, if only it had been an earthquake!” says a night watchman. “A good bad shock, and there you are! You count the dead and the living, and that’s an end of it. But this here damned disease, even them who haven’t got it can’t think of anything else.”

Of course it does. Yet the value of “The Plague” isn’t that it predicted our problems, like a visionary novel by a science-fiction prophet. Rather, it presents a case study in theodicy: the eternal conundrum of why a good God would permit so much bad.

Father Paneloux draws his answer from the Old Testament: “Pharaoh set himself up against the divine will, and the plague beat him to his knees.” It also dissatisfies. The novel’s villain has no will, divine or otherwise. Maybe it’s not even a villain. As a faceless force of nature, the plague is possibly more menacing than a villain with a motive: It’s indifferent. It doesn’t care about human joy or misery. It strikes with apparent randomness. It has no meaning.

People yearn for meaning, however. When Father Paneloux tries to make sense of Oran’s anguish (“You deserved it”), he misses the point. The plague has no concept of deserving or undeserving. It just does what plagues do, with lethal apathy. Father Paneloux recognizes this possibility only after he watches the decline of an innocent. “My God, spare this child!” he calls out, and the boy dies anyway. 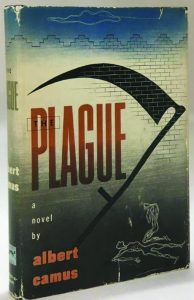 “The Plague” is full of atheists, but many of them aren’t especially good at atheism. First among them is Rieux, who is the novel’s main character as well as its narrator. Asked if he believes in God, he replies that he doesn’t.

Then he confesses: “I’m fumbling in the dark, struggling to make something out.” In his confusion, he may not believe like a Christian, but he often behaves like one as he cares for the sick and risks exposure to the pestilence. He’s possessed by a moral sense, a desire to do good in a world that he finds impossible to understand.

Father Paneloux strives to understand it, and one of his jobs as a priest is to help others understand it as well. When he delivers a second sermon, he contradicts his first message. Christians can’t know the will of God, he says, but they must accept it, even to the point of believing that the horrors of a plague and the death of an innocent child may be for the best.

Hoping that good can come from bad is a natural desire, and it has the power to console in times of grief. Yet Father Paneloux gives the idea a radical application: If you’re sick, don’t call a doctor, whose business is to defy what God intends.

This is madness, and Father Paneloux’s actions drown out his words as he devotes himself to the afflicted. He becomes one of those who Pope Francis in his March 27 “Urbi et Orbi” liturgy called the “ordinary people … who without a doubt are in these very days writing the decisive events of our time” by tending to the needs of others.

Father Paneloux may fail as a homilist — a wiser priest would have spoken about the need for faith, as the pope did — but he succeeds as a Christian. Ultimately, he dies in the service of the sick.

His death is puzzling, though. Rieux doubts that it’s from the plague at all. Father Paneloux simply may have willed himself to die. The result is ambiguity, or maybe even absurdity, as Camus, who was no apologist for the Church, might have put it.

That’s the thing about theodicy, though: It doesn’t lend itself to human understanding. Yet it does provide an occasion for faith and service.

A Jewish lesson on Catholic prayers for the dead