One Wednesday night in February, Kent Dodds wanted a movie recommendation. Logging on to Twitter, he posted his criteria for his nearly 90,000 followers.

“Action/adventure,” he wrote. “Light on violence. No sex/nudity. Interesting plot and good execution is a bonus. What you got for me?”

Recommendations poured in. But finding a film that met all those criteria was easier said than done. When one user suggested “District 9,” Dodds responded, “Looks interesting, but wow that movie sure does love the f-word!”

Another recommended “Captain Fantastic.” “Interesting premise!” Dodds noted, before someone commented, “This would fail the no nudity test though.”

While Dodds’ criteria yielded some good titles, they also blacklisted several that, minus the unwanted content, might have made for a great movie night.

Then one reply had a different kind of suggestion. “I recommend VidAngel,” wrote Jamon Holmgren, “for watching movies and shows while filtering for just the stuff you want to see.” Holmgren added that he used VidAngel to watch “Game of Thrones” with his son, “and it did a good job of removing the gratuitous stuff without taking away from the story.”

Holmgren learned about VidAngel, a subscription-based filtering service, through a social media ad. “I enjoy a wide variety of shows,” he told Angelus, “but there are aspects of some popular shows that I am not interested in — gory violence, gratuitous nudity, and excessive profanity. I liked the idea of being able to experience the show in a format that I chose.”

Holmgren and Dodds are not alone in their search for quality yet clean entertainment. Across the country, various groups have voiced dissatisfaction with Hollywood’s content trends and seek alternative ways to enjoy media.

The video-streaming industry seems to be taking over the nation’s TV screens. According to a 2020 report from the Consumer Intelligence Research Partners, an estimated 112 million Americans — more than one-third of the U.S. population — have an Amazon Prime subscription.

The data platform Statista reports that 18.5% of the U.S. population, or 61.04 million people, subscribe to Netflix. And Disney Plus, launched just this past November, has already acquired 28.6 million subscribers.

It’s safe to say that these services make up a big part of American families’ means of entertainment. But to what extent are they family friendly? According to the Parents Television Council (PTC), the industry leaves a lot to be desired. 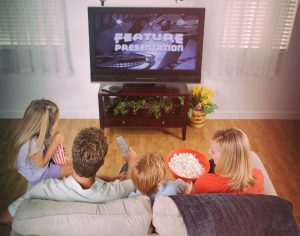 In a 2017 report, the national advocacy group reviewed the most popular streaming services, including Netflix and Amazon Prime. The report found that among all of the streaming services, none of them allowed parents to block explicit titles and cover art across devices.

“While Hulu and Netflix both provide the option of a separate user profile for child viewers,” the report states, “there is nothing to stop a child from switching over to an adult profile with either service. Amazon does not provide a separate child user profile option.”

“If your plans include family movie night,” wrote PTC, “in less than five hours — or three movie nights, tops — you will have exhausted Netflix’s entire inventory of original films rated PG or lower.”

More recently, PTC described Disney Plus as an “80% streaming solution for families,” since it does not include any filtering or parental control systems.

The bottom line: When it comes to movies and TV, good clean fun is hard to find, and when you do find it, it’s often mixed in with explicit content. This presents a real dilemma for those who try to weed out offensive language and behavior from their media diet, and especially for parents trying to guard the eyes of their children.

Something for their own homes

Seven years ago in Provo, Utah, four brothers were facing this exact problem, and they were fed up.

“We all have young children at home,” VidAngel co-founder and CEO Neal Harmon told Angelus. “We wanted to create something that we wanted for our own homes.”

Tired of being bombarded with explicit material in their search for great films, the four Harmons wondered, Why not make something that allows you to skip over that content? So in 2014, they launched VidAngel.

The project posed a challenge: How would they execute a filtering service that would be consistent, efficient, and customizable? Their solution was to construct a series of categories (such as nudity, profanity, and graphic violence) and have multiple people watch each film to “tag” content in those categories, flagging it for filtering.

Originally, VidAngel ripped movies from DVDs and redistributed filtered digital versions to customers. In 2016, a group of four studios, including Disney and Twentieth Century Fox, sued the company for copyright infringement.

The studios won the case, and VidAngel was ordered to shut down its service. But soon after, the company introduced a new system, which works through subscriber streaming services. 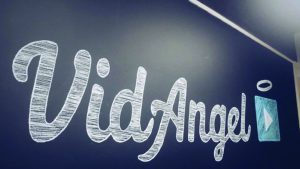 “You download the VidAngel app,” Harmon told Angelus, “and then all the titles that are available for filtering are inside that app. If you want to watch something that requires Netflix, then when you go to watch it, it’ll [prompt you to enter] your Netflix email and password. VidAngel will then connect to your Netflix account on your behalf.”

If customers want to watch a movie that has not yet been filtered, they can still search for the title and request a filtered version on the app.

According to Harmon, it takes about a day for a film to undergo the filtering process, although VidAngel is working on technology that will computerize the tagging system and reduce the wait time. Once a filtered movie lands in the app, customers can select which filters they would like to apply.

Options range from broad to specific. Viewers can mute all profanity and blasphemy or just certain words. They can skip over anything market as “sex, nudity, or immodesty” or opt to leave in “implied, not shown” intimacy. VidAngel even makes subcategory distinctions, such as “passionate” versus “normal” kissing. And for the ultra-efficient watcher, the option to skip credits is also there.

For the most part, the filtering system seems to work well, though it still isn’t perfect. Watch “Marriage Story” with all “kissing” filtered out, for instance, and you’ll find that one brief yet intimate smooch was missed. But according to Harmon, such lapses are rare; he told Angelus that he recalls only two occasions when VidAngel has had to apologize to a customer for an oversight.

Reviews for VidAngel have been mostly positive. It received 4.7 out of 5 stars from more than 17,000 reviews on AppGrooves, and 2,100 reviews on Facebook gave it a 4.8 out of 5. But one of the service’s biggest handicaps is that movies owned by the studios that sued VidAngel are blocked.

In an effort to change that, VidAngel has launched a campaign to support an update to the Family Movie Act, a federal bill that VidAngel argues gives legal backing to its service and should therefore allow more movies to be filtered.

“Our customers have stuck with us and continue to support us,” said Harmon, “and they beg us not to give up.”

“The reality is there’s not a lot of Christian content out there,” said Goss, former Amazon executive and CEO of Minno, a media company launched this past fall.

That scarcity concerned Goss, given the portion of churchgoing Christians in America. According to the Pew Research Center, about 102 million (62%) Christian adults go to church at least monthly, and 72 million (44%) go at least weekly.

Minno reports that about 48 million Christian families with children in prekindergarten through fifth grade attend church weekly or monthly.

Like Harmon, Goss was dissatisfied with the dearth of wholesome content on popular streaming services. So in November 2019, he and his colleague Dan Raines launched Minno for Christian families.

The online platform, whose title comes from the Greek word meaning “to abide” (a reference to the Gospel of John), includes a Netflix-like media library, an online bookstore, and a parental guidance blog.

“What we’re trying to do is come alongside parents and solve the media and technology problems parents face,” Goss told Angelus. He explained that while many Christian parents are eager to help their kids grow in the faith, they’re often at a loss about where to begin, especially when it comes to navigating media in a secularized world. 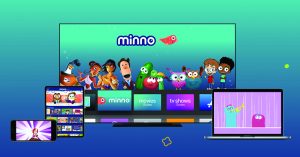 Minno Kids, which Goss described as “sort of like Netflix for Christian kids,” offers a variety of faith-based children’s shows, including “the world’s largest collection of Classic VeggieTales.” Currently, Minno offers 128 shows and more than 2,000 episodes, but Goss said they’re continually working to add more.

Three people review each potential show to determine whether it is wholesome, well-written, and entertaining. “We really want parents to trust us, [since] they’re inviting us into their homes,” said Goss.

According to Goss, Minno has reached more than 20,000 subscribers in more than 40 countries worldwide. Some subscribers have made it their only household streaming service, relieved that they no longer have to worry about what their kids search for and watch.

Others use Minno as a supplement to their media diet. Regardless, Goss is happy with the results so far. “It’s exceeding expectations,” he told Angelus.

‘A culture infused by Christ’

Given the prosperity of the streaming giants and the types of films honored at the Emmys and Oscars, it still seems that graphic and explicit content comes part and parcel with the film industry. But according to Harmon and Goss, that need not be the case.

“We hope we can change the conversation and the business of media,” Harmon told Angelus. He believes that as VidAngel’s audience grows, it could compel others in the film industry to cater more directly to a family-friendly crowd.

Goss also sees his work as an opportunity to uplift not only families, but also the culture more broadly. He told Angelus that in launching Minno, he hopes to promote professional excellence as well as “a culture infused by Christ.”

“The mission of Minno is to help people experience the goodness of God,” he told Angelus. “We really want Minno to be a platform that helps people imagine what a Christian life can be.”

VidAngel and Minno are still young, and it’s hard to project their future success or impact. Nevertheless, they highlight the importance of family and Christian values. These are values that are fading in today’s media world, but as these companies demonstrate, they have not disappeared completely.