Julian of Norwich: A guide for hard times

“If God is supremely good and wise, why do evil and the suffering of innocents exist?”

Pope Benedict XVI asked this question in his audience on Dec. 1, 2010. To answer, he cites the words of Dame Julian of Norwich, a 14th-century English anchorite and mystic found in the The Catechism of the Catholic Church (cf. nn. 304-313, 314).

He recognized that “the Saints themselves asked this very question. Illumined by faith, they give an answer that opens our hearts to trust and hope: in the mysterious designs of Providence, God can draw a greater good even from evil, as Julian of Norwich wrote: ‘Here I was taught by the grace of God that I should steadfastly hold me in the Faith ... and that ... I should take my stand on and earnestly believe in ... that ‘all manner of thing shall be well’ ” (The Revelations of Divine Love, Chapter 32).

I spoke with Veronica Mary Rolf, who has written two books on the life and teachings of this incredible woman, “An Explorer's Guide to Julian of Norwich” (IVP Academic, $14) and “Julian’s Gospel” (Orbis Books, $26), which won the 2014 Catholic Press Association Book Award. 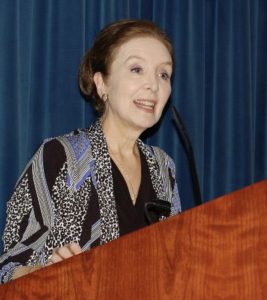 Kris McGregor: How did you come to know of Julian of Norwich?

Veronica Mary Rolf: My deep, loving relationship — spiritual friendship really — with Julian goes back to my high school days at the Convent of the Sacred Heart in New York City. My theology teacher used to say to me whenever I was in crisis, “All shall be well, and all shall be well. And thou shalt see thyself that all matter of things shall be well.”

Of course, those are Julian’s most famous words that she heard the Lord speak to her.

As I read her “revelations,” I came to know this woman, speaking to me of her experience of Christ on the cross, both suffering and transformed into glory. Her whole understanding of Christ's unconditional love, of the total lack of blame, of the total lack of wrath or anger that she felt coming from Christ on the cross, it was all about embracing and enfolding and cherishing us. And wow, that packed a wallop, and it still does.

At the age of 30, Julian suffered a deathly illness. For one week she thought she was dying, and the priest brought a crucifix. She looked at it and suddenly she was healed, and she felt herself transported into an experience of deep, contemplative revelation. She saw Christ on the cross.

She heard him speak to her, not through the lips, but interiorly, and these 16 revelations unfolded over the next 11 hours. During this time, she asked Christ questions: What is sin? What is suffering? Does God really love us, or does God punish us? These are still the big questions we ask today.

She even laughed out loud at one point, she said. And then finally, at the end of the revelations, she saw and felt Christ in her heart, sitting in her heart. And she was so touched that he was sitting, and not standing or leaving or coming. He was securely there forever.

All of her revelations unfolded in this time period, but it took her the next 40 or 50 years to write about them. She wrote a “Short Text,” which many people love because it’s very simple, in probably the late 1370s.

She had her revelations in 1373, but then in the 1390s, she entered a very small anchorage. We speak of her as an anchorite, but that was only the last part of her life. She had already been a wife and mother, and probably lost a child in the plague, and she’d been a businesswoman.

Her anchorage was attached to the side of the church. She could hear Mass and receive communion. We know she died sometime after 1416, so she was in the anchorage for about 25 years. 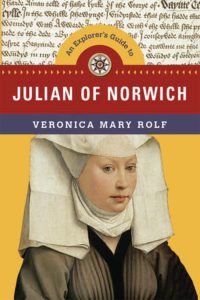 McGregor: This was a period of extraordinary women. I’m thinking of St. Bridget of Sweden and St. Catherine of Siena. What a trio of women.

Rolf: Yes, and yet very different in many ways. We know St. Catherine, although she had three years as a cloister in her own home, was a very political figure, as well as a mystic, as was St. Bridget.

Julian was not like that. Julian was probably hardly known in her own time and for most of the 600 years since, until the early 20th century. I feel she was saved for our time.

Julian’s writings must’ve been scurried out of England by those who wanted to remain Catholic during the turmoil of the Reformation in England and held by the Benedictine religious women in France, and then copied. But they weren’t published. They weren’t well circulated.

It wasn’t until the early 20th century when the “Short Text” turned up, the so-called “Lost Text,” at Sotheby’s in 1910 at an auction.

McGregor: Pope Benedict pointed out the importance of these women and that their voices had been underutilized in theology and needed to be heard, especially today.

Roth: Absolutely. Julian became the first woman to write a book in the English language. She became the first female English theologian, and she has been lauded as this pioneer, but it took hundreds of years for it to get known.

She also has such a positive, light-filled, hope-filled message, but she isn’t a Pollyanna. It isn’t an easy message. She came to that realization through her contemplative life and through the revelations, and as such it appeals to us because we know she is grounded in the very suffering we endure. It’s not like she was spared real life and the real sufferings, war, famine.

She had to deal with the reality of sin in the world all around her, and the wars and brutality and viciousness of her time. And yet, she had to see how Christ was working transformation through it all.

Unless we go through Calvary, we can’t really appreciate Easter Sunday morning. You can’t whitewash or obliterate the fact of our suffering, united with Christ suffering on the cross. Because if you do, you can’t experience the Resurrection and transformation. 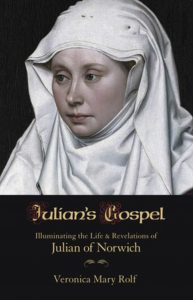 We mustn’t act as if it’s all going to be well tomorrow — wow, I’m going to get the job, I’m going to fall in love, win the lottery. It’s about our ongoing spiritual transformation. It gives us the mystical eyes, ears and heart to see how Christ is working now and in eternity because Christ is looking at all of our suffering and already realizing how he is making it well.

With God’s help, we can get through anything. We will not be overcome. And I think that was her mantra. It doesn't mean our lives will be easy, but we will find deeper and deeper peace and joy in the presence of Christ working in us, and confidence. We will never be overcome by suffering or sorrow or loss or illness or even evil. As Christ said on the cross, “It is done. It is finished.”

He has overcome the world. And that’s how she says, “If we mightily trust in him, we shall see how all shall be well.” And that stays with me every day, every hour of the day. I give thanks to Julian for being in my life, because I don’t know what I would’ve done without her.