How autism has helped one man connect with God

It is entirely possible that people who do not personally know someone with autism spectrum disorder might form their assumptions about it from popular television and film characters, like Dustin Hoffman’s Raymond Babbit in “Rain Main,” Freddie Highmore’s Dr. Shaun Murphy of “The Good Doctor,” or Keil Gilchrist’s Sam Gardner in the Netflix series “Atypical.”

But for Jory Fleming, a real-life 20-something with autism, these portrayals risk doing a disservice, since they either portray persons with autism exclusively as savants or as persons struggling with socially unacceptable behaviors and tics.

It’s the reason Fleming doesn’t like being pigeonholed by the fact that he is the first person with autism to attend Oxford University on a Rhodes Scholarship.

“Autism is on a spectrum for a reason,” he writes in his book, “How to Be Human: an Autistic Man’s Guide to Life” (Simon and Schuster, $26).

What Fleming and co-author Lyric Winik serve up in “How to Be Human” is an honest, transparent, and hopeful conversation about what it’s like for one person with autism to exist in a neurotypical world. While the book explores the latest research into how autistic brains work, the writers acknowledge that much about autism, including why it arises, remains unknown. 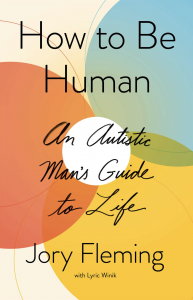 Winik and Fleming provide the reader with a window into Fleming’s daily — sometimes hourly — struggles in processing experiences and communicating with others, as well as the will he has to flourish in a world that was not set up for him. “There are no safe spaces for me,” he poignantly shares.

It is a privileged look into the mind of a man who lives with a disorder that remains a mystery to so many. But it is equally a portrait of the gifts that persons with autism bring to their families, communities, and the world.

Winik and Fleming begin their conversation examining Fleming’s childhood, one fraught with difficulty. Though Fleming does not have many memories of his childhood — something he attributes to autism — he does know one thing: His mother played an essential role in creating the necessary stability for him to flourish, and creating an at-home educational offering helped him move from being nonverbal to getting his Rhodes Scholarship.

“Mom was the centerpiece of that environment,” he shares.

In addition to the challenges of autism, including difficulty using language, following sequential commands, and sensory disintegration, Fleming had to battle a severe kidney infection and meningitis, on top of maneuvering the physical world with cerebral palsy.

Winik asks Fleming to describe how his brain interprets what it sees, hears, and understands. For Fleming, using his brain depletes finite stores of energy, and he’s painfully aware of when his tank is low.

Fleming depends heavily on visual memories and associations rather than language; he is more readily able to find the right words to articulate a point when he’s had a previous experience of something or someone. Fleming says that unlike neurotypical people, he’s never had an interior monologue or the ability to talk to himself, which he doesn’t really mind, nor is he bothered by his struggles to understand idioms or sarcasm.

While babies are able to babble before learning language, Fleming says that he has to gain control of his mind and its associations before he chooses words that are accurate or appropriate to use. The latest research suggests not that there is a glaring deficit in any one sphere of an autistic person’s brain, but rather difficulty making connections between them.

It would explain why Fleming is always painfully particular about picking the right words so as not to offend conversation partners or friends, whose facial expressions and emotional responses he has difficulty interpreting.

In the book, Fleming also aims to dispel a myth: that persons with autism have no emotional life. While he can’t convey his emotions when speaking publicly, they are there. The difference for Fleming is that he doesn’t register having an emotion until it reaches a certain intensity. This means that he’s often misunderstood, which naturally saddens him.

But he chooses to focus instead on the advantages this trait provides him: He’s less defensive and more open to constructive criticism; he doesn’t give more weight to what celebrities or pundits have to say about anything; and he’s able to be more objective in relationships and decision-making. In this, Fleming leads the reader to self-examination: Where one notices deficits — in nature, virtue, or elsewhere — there are also opportunities for grace.

While he struggles to understand concepts like culture, Fleming believes his autism helps free him from some of our current societal trappings. He does not feel beholden to ideology, and is sharply critical of the way it clouds people’s judgment about reality. In a world marked by collective anger, Fleming says that he’s chosen to cultivate a personality marked by radical optimism.

“I’m really driven by stuff that I want to see get better,” he writes. “I recognize that I only have about 40 or 50 years to make a difference. The clock’s ticking.”

Winik asks him about living in a world that is trying to eradicate what is perceived as weakness or flaws with the help of everything from gene editing to Instagram filters. This world, she suggests, might want to eradicate autism from the population.

Fleming draws his conclusions from his work in marine biodiversity, which he says strengthens the ecosystem instead of weakening it. “I get confused when researchers try to find cures to autism,” he says. “I’m really appreciative for the way that I think.”

While Fleming doesn’t make it a point to lead with autism when he is introducing himself to others (his LinkedIn and Twitter bios describe him as an “enigmatic and eccentric thinker”), he likewise doesn’t lead with the importance of his Christian faith. He’d prefer to leave that for after someone has gotten to know him rather than judge him for it upfront, especially because he says that his faith is driven by logic, not emotion.

Fleming beautifully describes the peace he felt while attending Evensong services at Oxford University, and shares that while he prays for help in developing and sustaining interpersonal relationships, his relationship with his Creator is the easiest one for him, since he believes that God intimately knows and loves his own handiwork.

In their book, Fleming and Winik invite the reader into an intimate conversation that unlocks the mystery of one autistic man’s brain. But their greatest gift is providing a window into his heart, one that is beating with love for a world that was not designed for him, but one he’s grateful to inhabit.

To an increasingly hardened world, this book offers a fresh way of looking at things and one another, one that refuses to reduce people to a singular trait, one that is open to the beauty, complexity, and mystery of each person. Maybe that viewpoint is considered atypical, but it’s equally an essential way of understanding what it means to be a human being.