'Gone with the Wind' rights were gift to Atlanta archdiocese

Ongoing American conversation on race and history focused on cinema Wednesday, when streaming service HBO Max announced it would pull “Gone with the Wind” from its rotation of movies, adding information on its historical context and a denunciation of its racially charged aspects before returning the film to its collection.

The 1939 movie, adapted from Margaret Mitchell’s bestselling Civil War novel, is the first film in which an African-American performer, Hattie McDaniel, won an Oscar. But critics say the movie perpetuates harmful stereotypes about African-Americans, and glorifies slave ownership in the antebellum South.

While the film will likely be the subject of ongoing debate, few outside Georgia know about the Catholic Church’s connection to the enduring place of “Gone with the Wind” in American life. 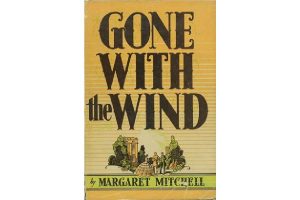 In 2011, the estate of a nephew of Mitchell donated half the trademark and literary rights to the “Gone with the Wind” novel to the Archdiocese of Atlanta.

Joseph Mitchell, the son of Margaret’s brother Stephens, died in October 2011 at 76. The novel rights were given alongside a bequest of $15-20 million in other assets, and were expected to realize an annual dividend to the archdiocese.

“The Archdiocese of Atlanta has been blessed with a generous gift through the kindness of Joe Mitchell,” Archbishop Wilton Gregory, then of Atlanta said Aug. 16, 2012.

“This gift is a reservoir of the funds earned through the genius of Margaret Mitchell and her depiction of the harsh struggles of Southern life during and after the Civil War.

“The Mitchell family has a proud Catholic legacy, and this gift will allow that legacy and that pride to be shared with many others in the archdiocese.”

“Gone With the Wind,” published in 1936, sold two million copies by 1939 and continues to sell thousands of copies a year in the U.S. The movie rights were sold in 1939.

Joseph Mitchell was the last living close relative of Margaret. He and his brother Eugene inherited a trust that gave each man a half share in the rights to their aunt’s famous novel.

Mitchell was a member of the Cathedral of Christ the King Parish, the archdiocese said. He asked that part of his donation help the cathedral.

In 2012, Gregory designated $7.5 million of the bequest to the cathedral’s building fund. He assigned $1.5 million to Catholic Charities Atlanta for immediate use, and another $2 million was set to create an endowment fund for the long-term needs of the agency.

Funds were also expected to help modernize the agency’s database system, and replace its aging trucks and vans for its refugee program.

“We’ll be in a position to purchase some equipment we desperately need for the last few years,” Krygiel said.

Over $1 million of the Mitchell bequest was designated for an endowment fund, which was expected to provide $10,000 gifts to parishes, mission and Catholic school of the archdiocese through the Catholic Foundation of North Georgia.

Another $150,000 was to be designated to the archdiocesan Deacons’ Assistance Fund.

Mitchell also gave to the archdiocese a collection of autographed “Gone with the Wind” first editions published in various languages, and an unpublished history of the Mitchell family, handwritten by Margaret’s father, Eugene Muse Mitchell.

Deacon Steve Swope managed the transition of the bequest on behalf of Archbishop Gregory.

“It is a magnificent gift,” he said at the time.

He said the archdiocese wanted to continue to make the book available to “the widest possible audience” in a way that is “respectful and dignified.”

Archbishop Gregory said at the time that each parish and school of the archdiocese will share the benefits of the gift.

“We should all give thanks for Joe’s kindness and remember all of the Mitchell family in our prayers,” he said in 2012.