‘Dignity': A worthy reflection on our ‘obligation to listen’

Chris Arnade had me at his opening paragraph in the new book “Dignity: Seeking Respect in Back Row America.” Here it is:

“I first walked into the Hunts Point neighborhood of the Bronx because I was told not to. I was told it was too dangerous, too poor, and that I was too white. I was told ‘nobody goes there for anything other than drugs and prostitutes.’

“The people directly telling me this were my colleagues (other bankers), my neighbors (other wealthy Brooklynites), and my friends (other academics). All, like me, successful, well-educated people who had opinions on the Bronx but had never really been there.”

Incidentally, I found myself in that same area about a year ago, but not fully appreciating where I was. I noticed not a lot of people around and some of the people around seemed to be operating in slow motion.

I did become aware that I felt and looked a little out of place. When you find yourself in these situations, you realize there are so many people with stories that ought to be told. But the tendency to go back to your usual routes and routines is too strong. Instead, you only encounter desperate poverty and addiction when it confronts you on a street corner or at a traffic stop.

As Heather King wrote in an Angelus column earlier this fall, Arnade not only went where he was told not to, but made a point of seeking these places out. He got to know people and became a part of their lives. He helped when he could, and still helps now: “The book is about them, and so is all the money it makes in sales.”

Arnade was a Wall Street trader who started taking long walks, first to alleviate stress around the time of the financial crisis in 2008.

“Along the walk I talked to whoever talked to me, and I let their suggestions, not my instincts and maps, navigate me. I also used my camera to take portraits of those I met, and I became more and more drawn to the stories people inevitably want to share about their life.”

He learned about their lives from them. “What I started seeing, and learning, was just how cloistered and privileged my world was and how narrow and selfish I was. Not just in how I lived but in what and how I thought.”

He knew he was privileged. He had a doctorate in theoretical physics and worked as a bond trader, living in an upscale part of Brooklyn.

“I sent my kids to private school. But like most successful and well-educated people, especially those in NYC, I considered myself open-minded, considerate, and reflective about my privilege. I read three papers daily, I watched documentaries on our social problems, and I voted for and supported policies I felt recognized and addressed my privilege.

“I gave money and time to charities that focused on poverty and justice. I understood I was selfish, but I rationalized. Aren’t we all selfish? Besides, I am far less selfish than others, look at how I vote (progressive), what I believe in (equality), and who my colleagues are (people of all races from all places).”

But in truth, Arnade says, he “had removed [himself] from the realities of the majority of Americans.”

A year after he started his long walks, he started becoming a little more part of the community. He would eventually leave his job in banking, thanks in part to the luxury of not needing a new job immediately.

And so, the problems of the people in Hunt’s Point became his problems. He went from buying McDonald’s or sliding someone $20 to “driving Shelly to detox, or visiting Sarah in Rikers, or finding out where Tiny was in the system, or seeing which hospital Mille ended up in, or taking Takeesha to the hospital, or getting someone out of the hospital. ... I would wake each morning to texts for help or walk into requests the minute I got to Hunts Point.”

He would also buy Xanax at inflated prices off the streets there. He had some common ground in addiction with some of the people he got to know.

Now a freelance journalist and photographer, the book is his report on poverty beyond Hunt’s Point too: in Alabama, California, Maine, and Nevada. 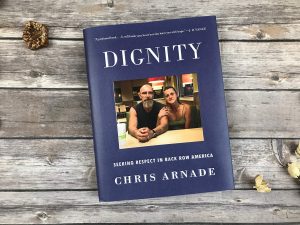 It’s not a religious book, though Arnade grows in respect for religion and sees what hope it brings to people who might otherwise have none. But it’s often brutal, and Arnade doesn’t sugarcoat anything (be prepared for raw testimony and language).

And he doesn’t propose some grand strategy for upending poverty and addiction. In the end, he concludes that “our nation’s problems are just too big, too structural, and too deep to be solved by legislation out of Washington. We need everyone — those in the back row, those in the front row — to listen to one another and try to understand one another and understand what they value and try to be less judgmental.”

We can’t all plant ourselves in a McDonald’s like Arnade did. But in his documentation, he demonstrates what Pope Francis means when he talks about going to the peripheries.

He may not have set out to be a Christian missionary living the beatitudes, but because of his journeys, he points us to who we should and what we should be doing: loving people more in the mess of life, as overwhelming as it can be.

Arnade does a beautiful thing in this book, highlighting our common humanity and the outsized responsibility of everyone with some power in the world. As we enter the holiday season during which so many will suffer alone, we would all do well to rethink our attitude toward the back row.

If there’s one takeaway for Catholics reading this book, it’s that the Church really does need to become what Francis describes as a field hospital: looking beyond the comfort of our parishes to touch the sufferings of those living on the peripheries, whether it be in Hunts Point, the Hamptons, or Hollywood.